Before I begin, I would like to take the opportunity to thank Low Chern Lin (aka Lucidlts) who has invited me aboard Tech-Critter. Such a great pleasure to be able to share my passion together with my other brothers-in-arms. 🙂 Today we will take a look on Asus GTX 760 DirectCU II OC. It is a trademark non-reference model from Asus, bearing the renowned Direct CU II heatsink, in which flattened heatpipes are in direct contact with the GPU, enhancing heat dissipation. The Asus GTX 760 DirectCU II OC is a factory overclocked rendition of the GTX 760. It comes clocked at 1006 MHz (1072 MHz boost clock), with memory speed running at a default 1502MHz (6008MHz effective GDDR5).
For this review, I will compare it with the Zotac GTX 760 AMP! Edition which we first had a look here not too long ago. Let’s see how the Asus card bearing a small factory overclock (OC) can fare against one of the highest overclocked GTX 760 in the market. 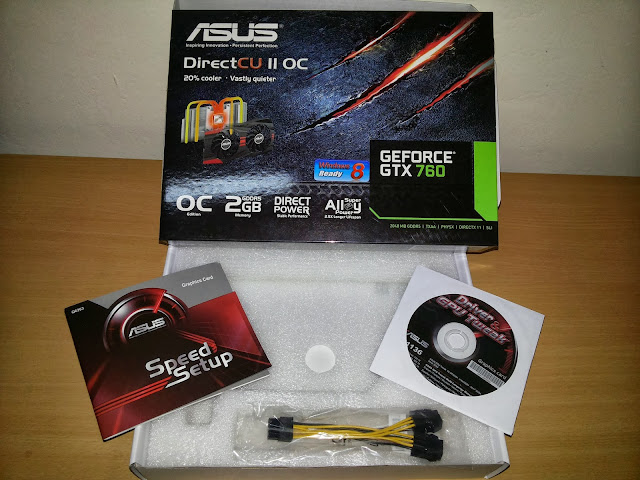 Here we can see the Asus GTX 760 DirectCU II OC in all its glory. Notice how it is quite reminiscent of its bigger brother, the GTX 780 DirectCU II OC. It is based on the similar 17 cm long PCBA that first made its debut on the Asus GTX 670 Direct CU Mini, which is very suitable for those looking for small builds. Overall card length is roughly 22 cm long and it takes up two slots in your system. It requires only a single 8-pin power connector, as compared to the reference model which requires two 6-pins. 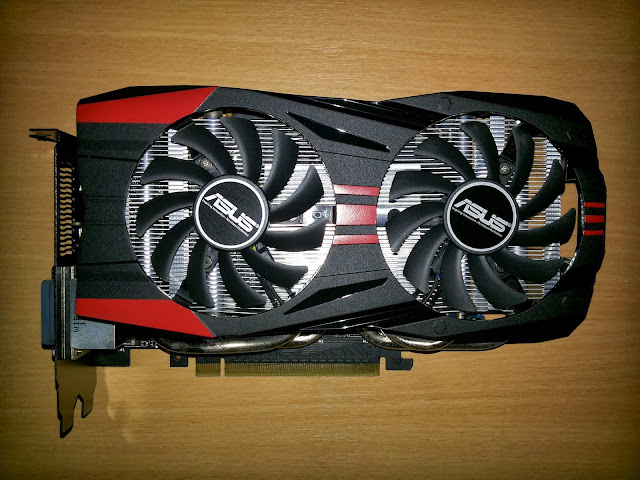 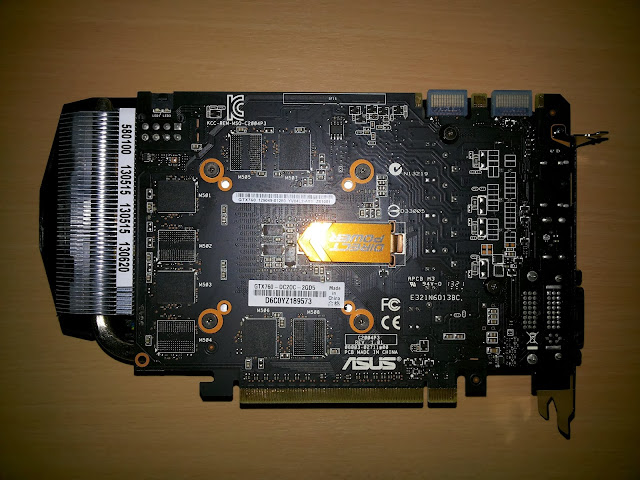 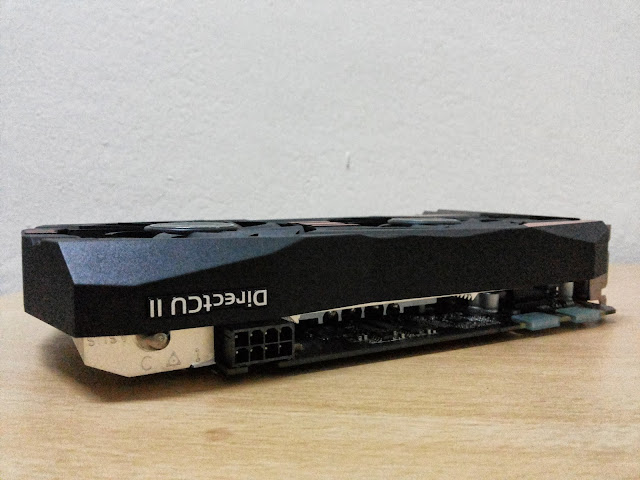 We can see a glimpse of the proprietary DirectCU II cooling solution employed on the card. It utilizes two 6mm + two 8 mm nickel plated heatpipes which is in direct contact with the GPU. In a short while, we’re going to see how significantly superior the cooling solution is. 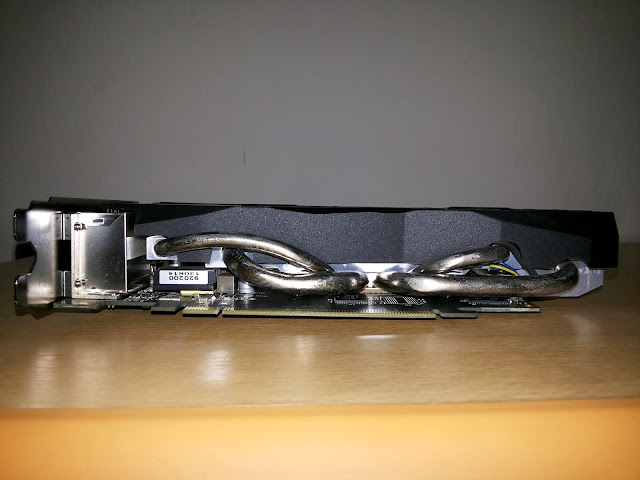 The card is now plugged in and ready to be powered up. 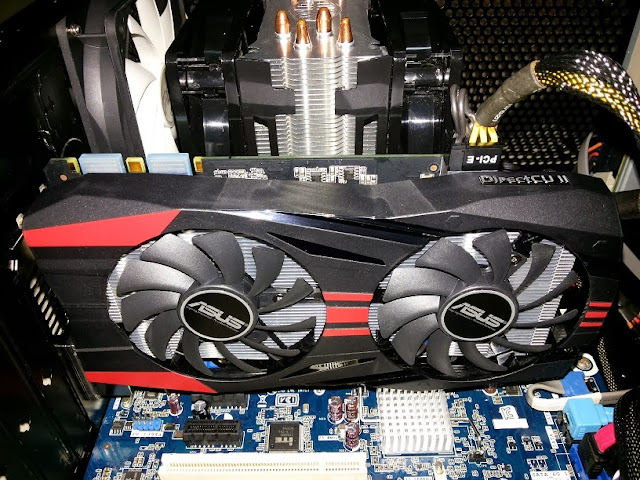 Testing is carried out in a non air-conditioned room.

All tests are carried out at the card’s default speed and no overclocking is done. 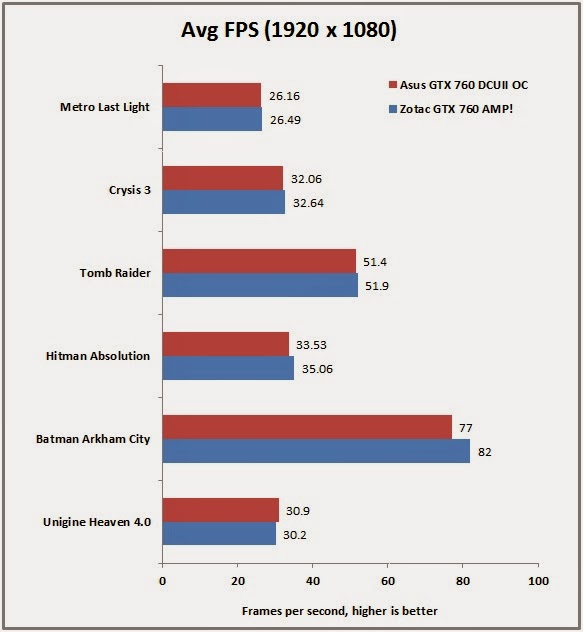 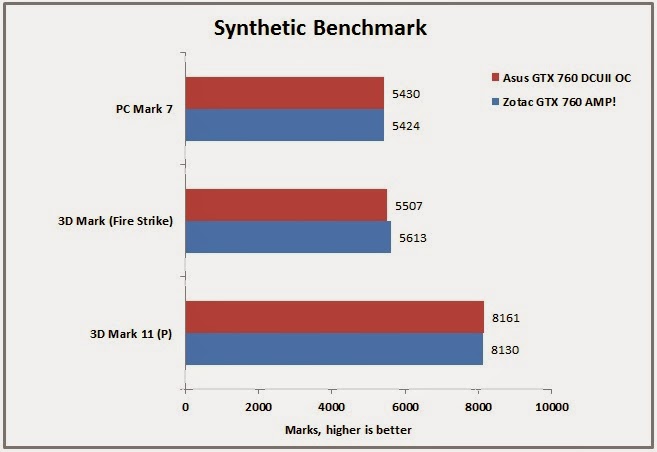 This is where the DirectCU II cooler is starting to show its potential. 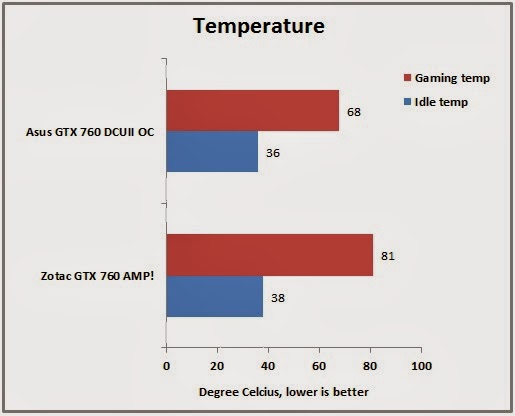 In summary, I find that the Asus GTX 760 Direct U II OC is on average only 1.59% slower than the faster clocked Zotac GTX 760 AMP! Edition. In terms of gameplay experience, this isn’t something tangible that you are going to experience anyway. The superior DirectCU II cooler managed to keep the max load temperature well below Nvidia’s default temperature target of 80°C (getting only 68°C). The card managed to hit a max boost clock speed of 1150 MHz, which is pretty high despite its lower base clock speed of only 1006 MHz. To further add on to my initial conclusion on the Zotac GTX 760 AMP! Edition that I first reviewed here, this card can only manage to hit its guaranteed boost clock speed of 1176 MHz, while temperature hit a high of 81°C. In some ways, I believe this holds true to Nvidia’s new GPU Boost 2.0 algorithm, whereby the GPU will try to boost as high as possible within its defined thermal envelope of 80°C.
The Asus GTX 760 DirectCU II OC certainly does pack a whole load of surprises despite its diminutive appearance. I could really find no flaw with its design and I highly recommend this customized GTX 760 to anyone looking for a quieter and higher performing card, right out of the box. Best of all, it comes in an all black PCBA and coupled with a nice cooler with a hint of red; I am sure it would go well with any build. However, it is not really cheap here in Malaysia, as it bears a SRP of RM1199. A reference GTX 760 from either Leadtek or Zotac could be obtained from as low as RM799, so that really does make a whole lot of difference. Well, that does it and I hope all of you had a good time reading up on my review once again. 🙂

Pros:
• Performance is on par with one of the highest overclocked GTX 760 (Zotac AMP! Edition), despite its lower base clock speed
• Very silent and efficient cooler
• Suitable for small builds

Cons:
• Expensive for a GTX 760, especially in the current local Malaysian pricing (RM)