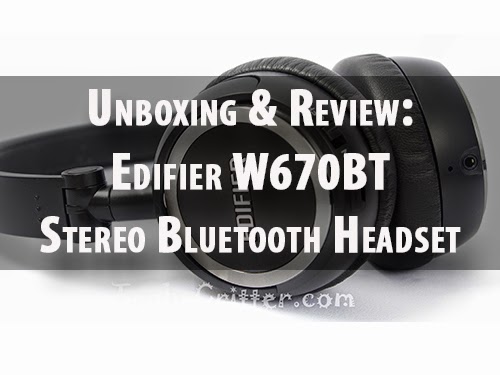 Now we know when it comes to music, not all of us listen to the same thing, hence we often see people with their headphones or In-ear-monitors (IEM) while going on their daily routines. But if you find that the wires that hangs from out from these personal audio devices inconvenient to downright pesky, then it’s probably wise to get a wireless headset.

A big thanks to Inter-Asia for providing Tech-Critter.com the Edifier W670BT Stereo Bluetooth Headset. If you’re an enthusiast for good music, most probably you’ve heard of Edifier, a maker and manufacturer of high quality audio devices that are pocket friendly in comparison to other solutions with the same features.

Retailing at RM199 (SRP) in the Malaysian market, the Edifier W670BT is priced well below any contender offering the same product type. Before we jump the gun however, lets see what this little wireless wonder can do.
Specs

Packaging
The Edifier W670BT comes in a overall white box with silver texts at the front depicting the Brand and model with an illustration of the headset smack right in the middle. Up at the top right corner indicates that this is a Bluetooth headset and the effective operation range of 10 meters. This is the packaging meant for China so if you happen to be buying in another country, it may differ. 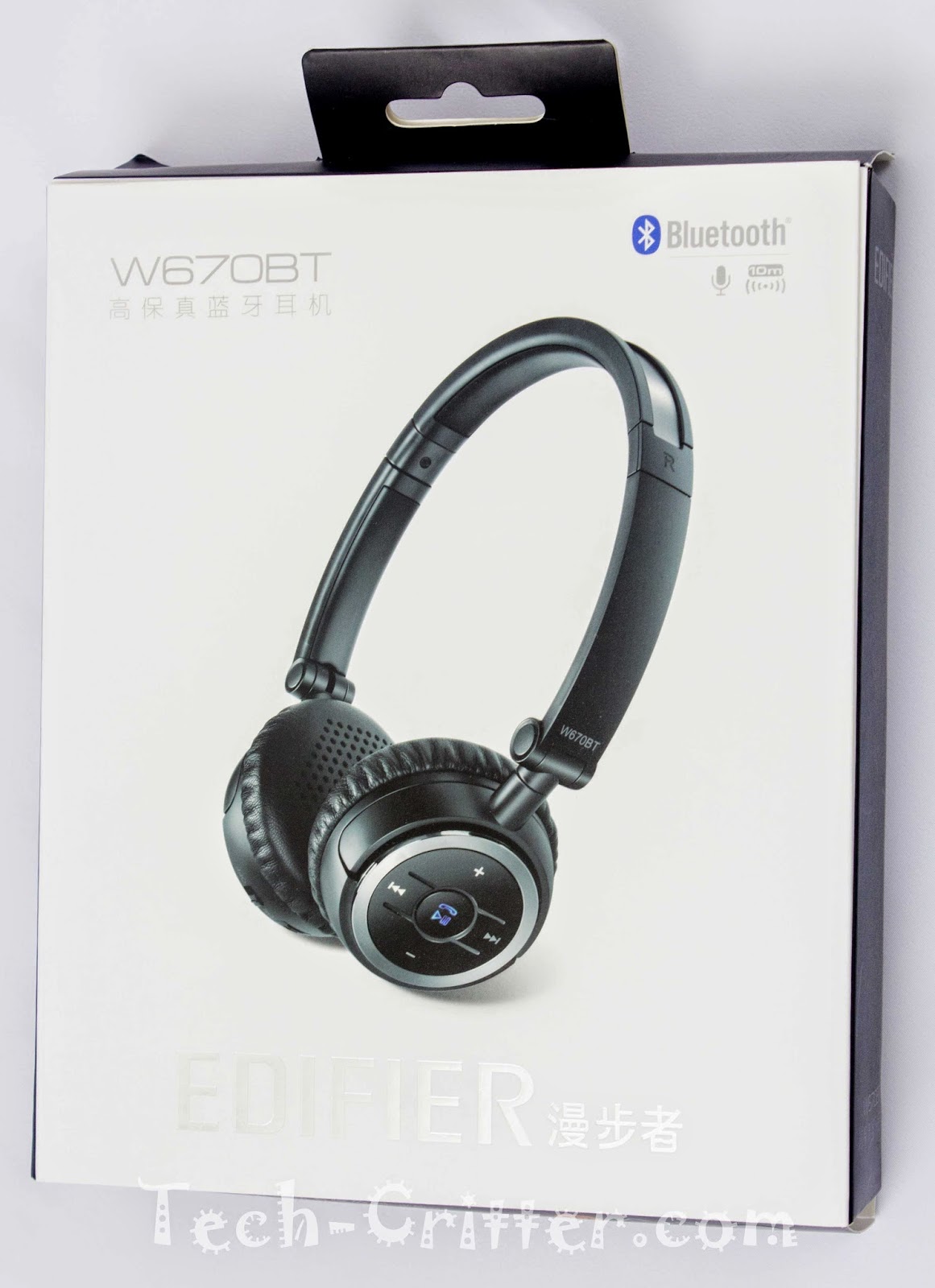 Opening the front flap will allow users to peek at the folded headset through the window along with the specs and features of the headset in Chinese. 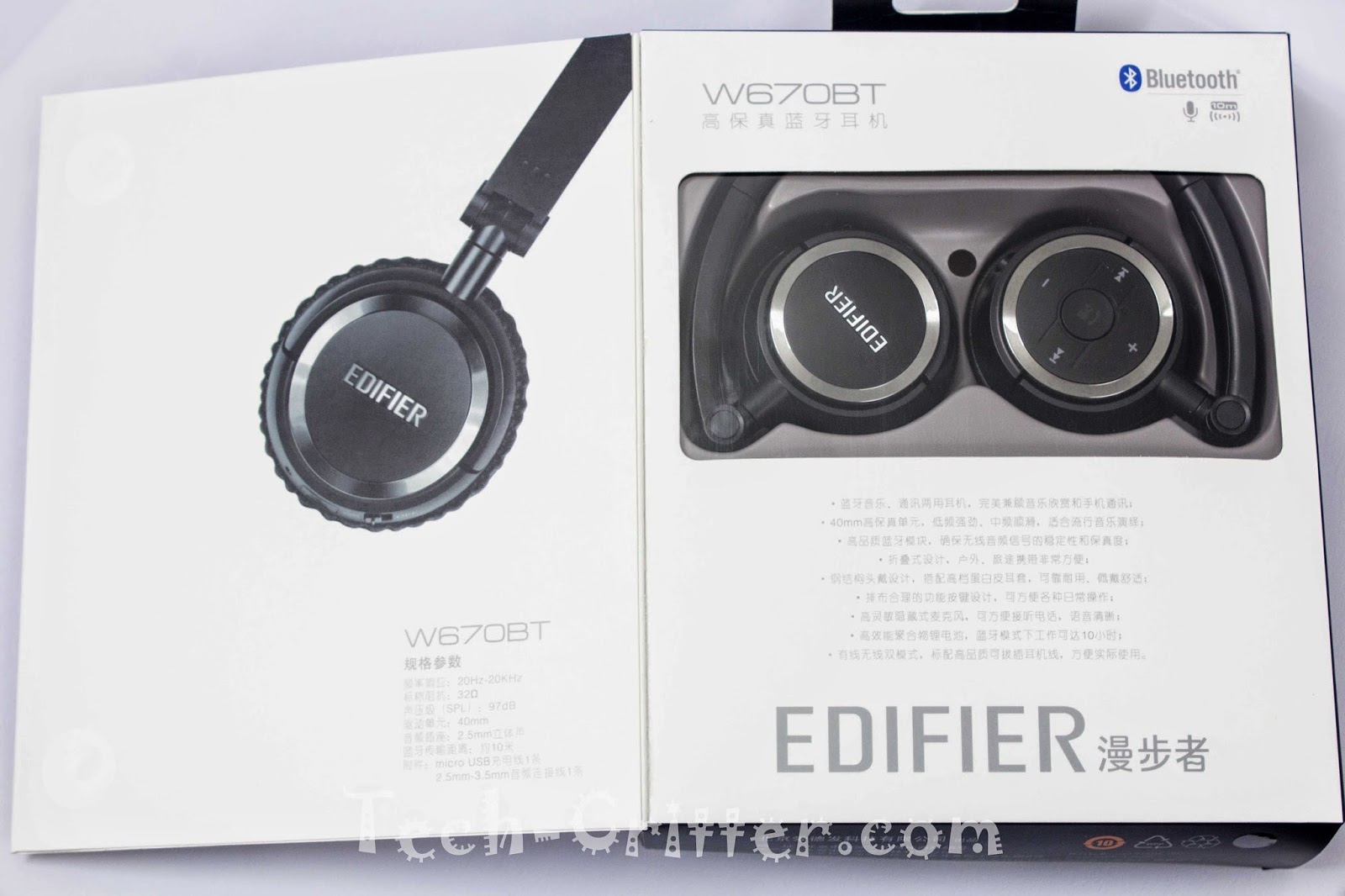 At the back is a collage of the product shot in different angles and another round of features in both English and Chinese this time. 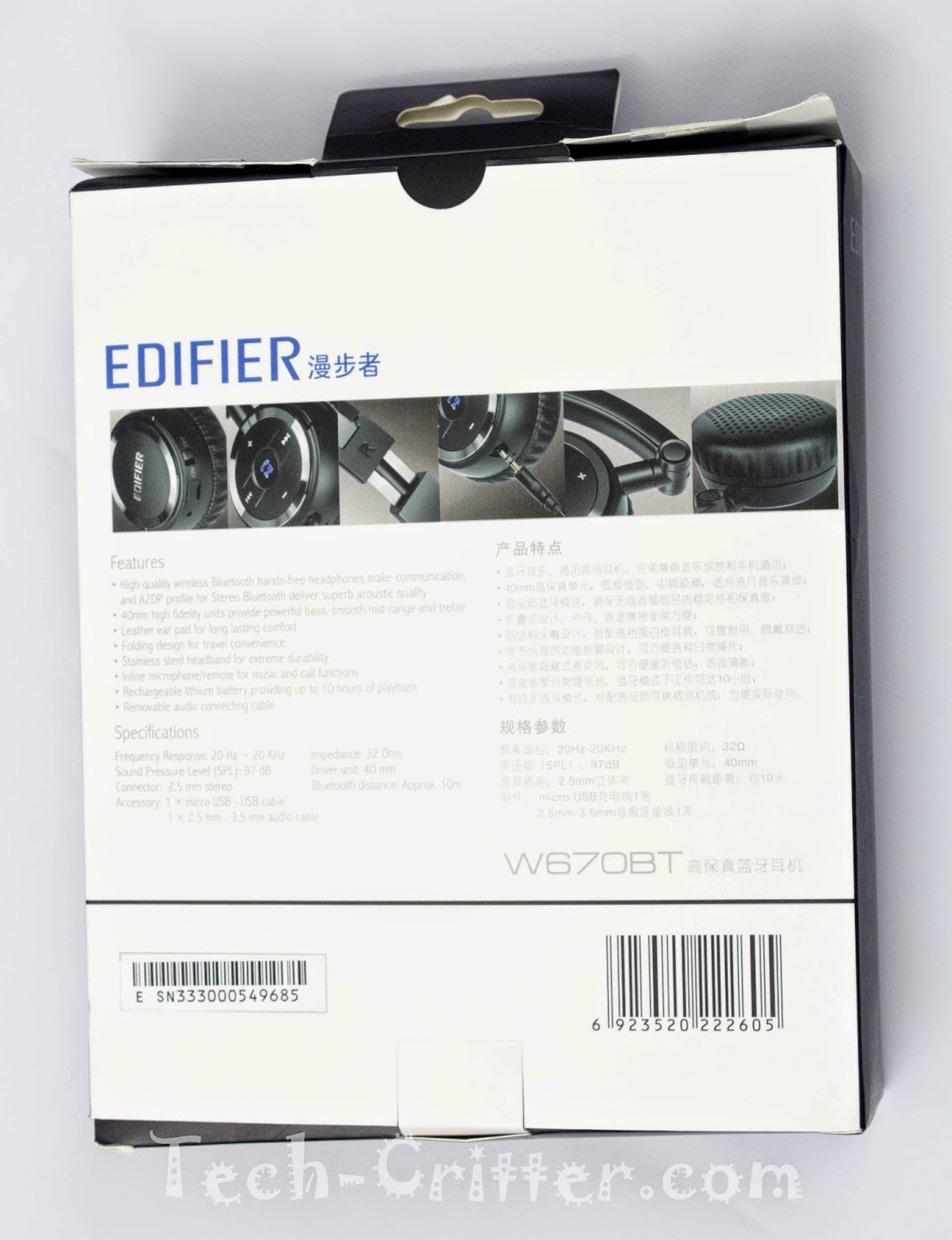 Taking the W670BT out of the box, you’ll find the headset, a quick-start guide, product information leaflet, a standard USB to Micro USB charging cable and a 2.5″ to 3.5″ audio connector. The leaflet indicates that the package doesn’t come with a wall socket connector for charging so users will have to either charge via the USB port on their PC, laptop, power-bank or procure their own wall-plug-to-USB converter. 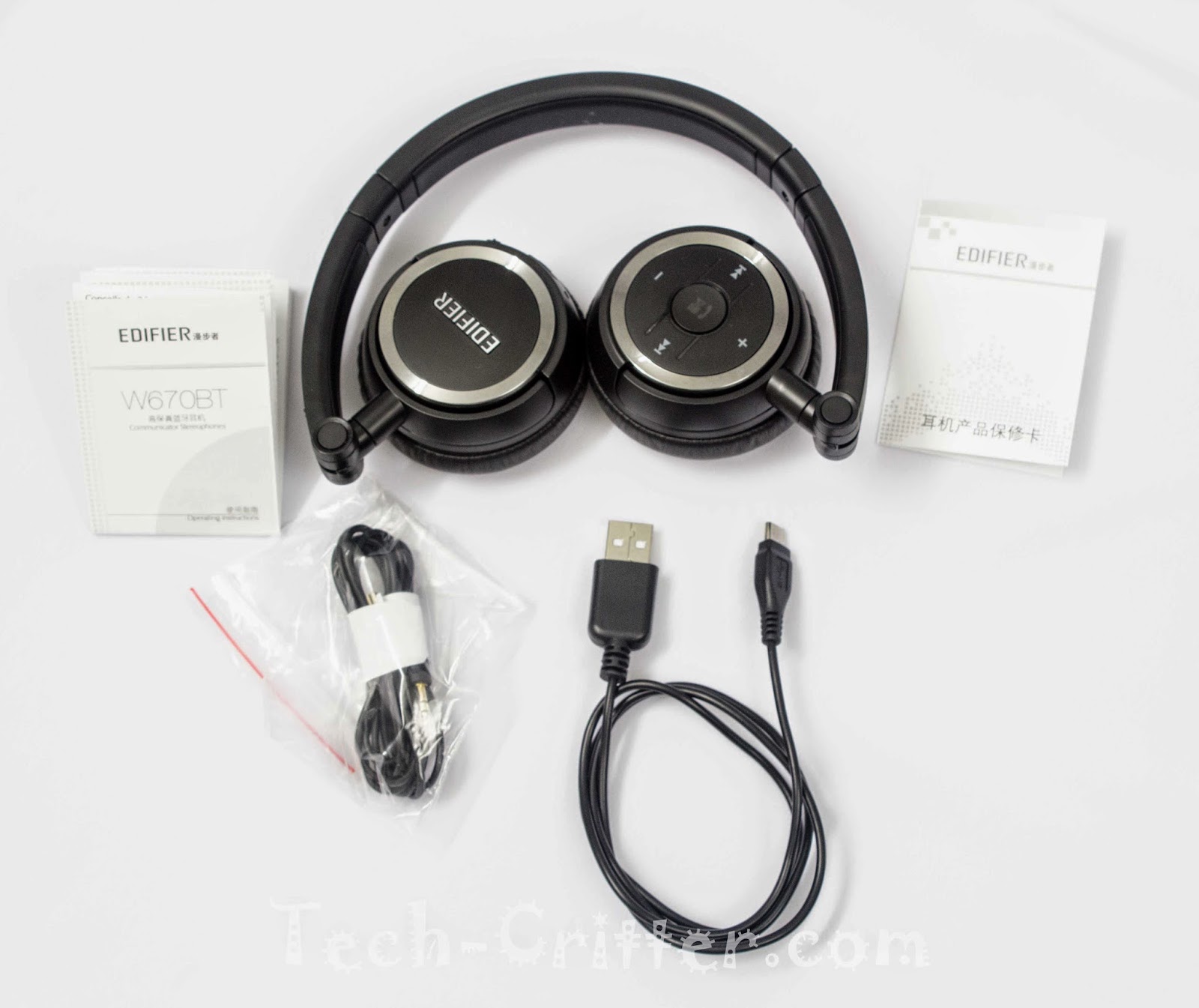 To give you a sense of size, here is a picture of a model wearing the W670BT. You can see that it’s very compact indeed. 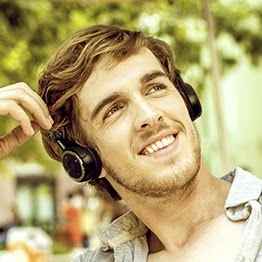 The Headset
The Edifier W670BT weighs next to nothing in my opinion which baffles me as it houses the battery as well as the sound drivers inside this tiny package of a headset. In it’s folded form, the W670BT can fit in rather tight spaces such as my pocket, so mobility is not an issue though most of the time I guess it’ll be hanging around my neck when not in use. 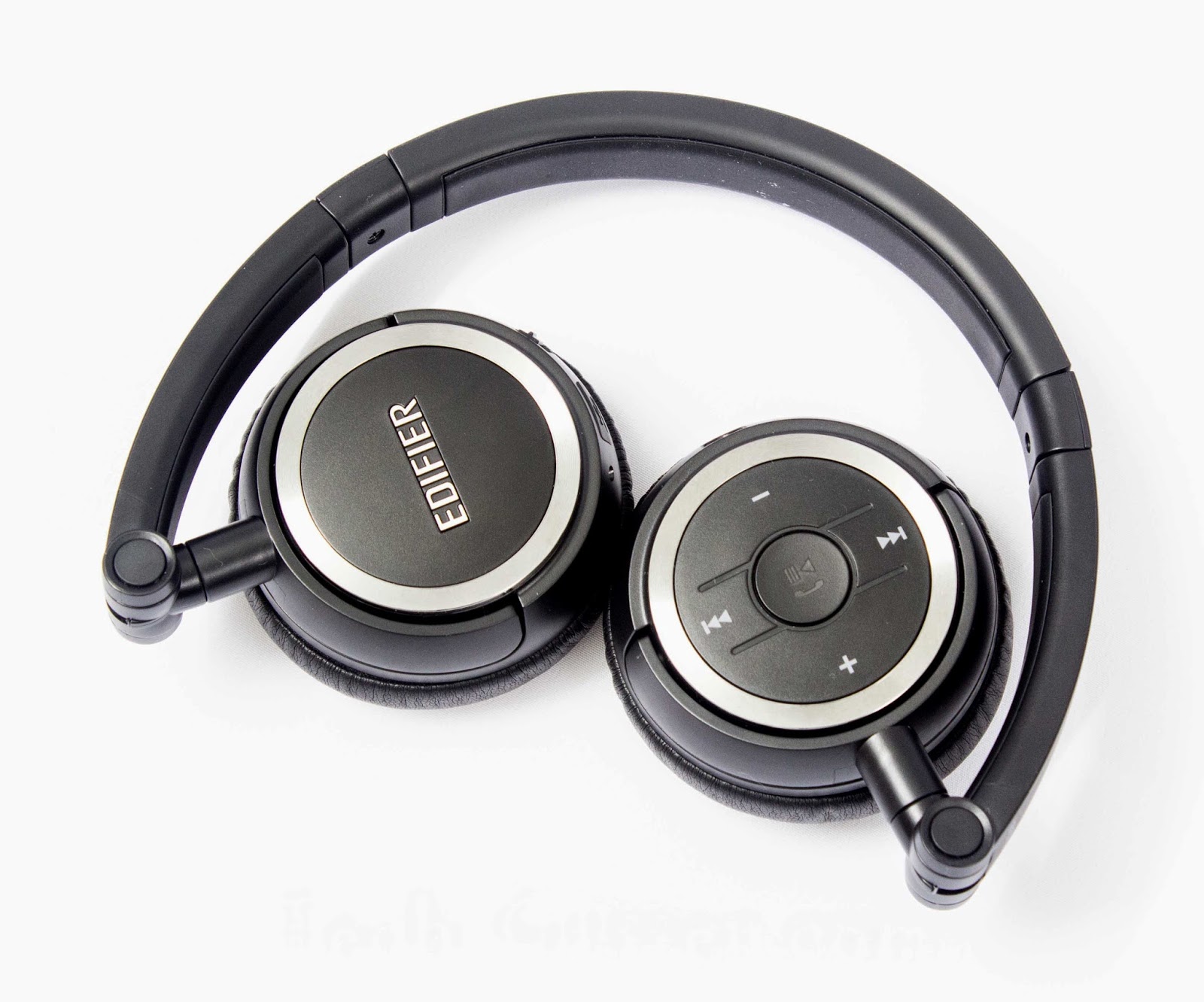 The construction is solid as well thanks to the stainless steel embedded into headband and extensions. Speaking of extensions, a total of 8 adjustment levels on both sides is available that extends to about 2.5cm so that it’ll fit the biggest of head-sizes. 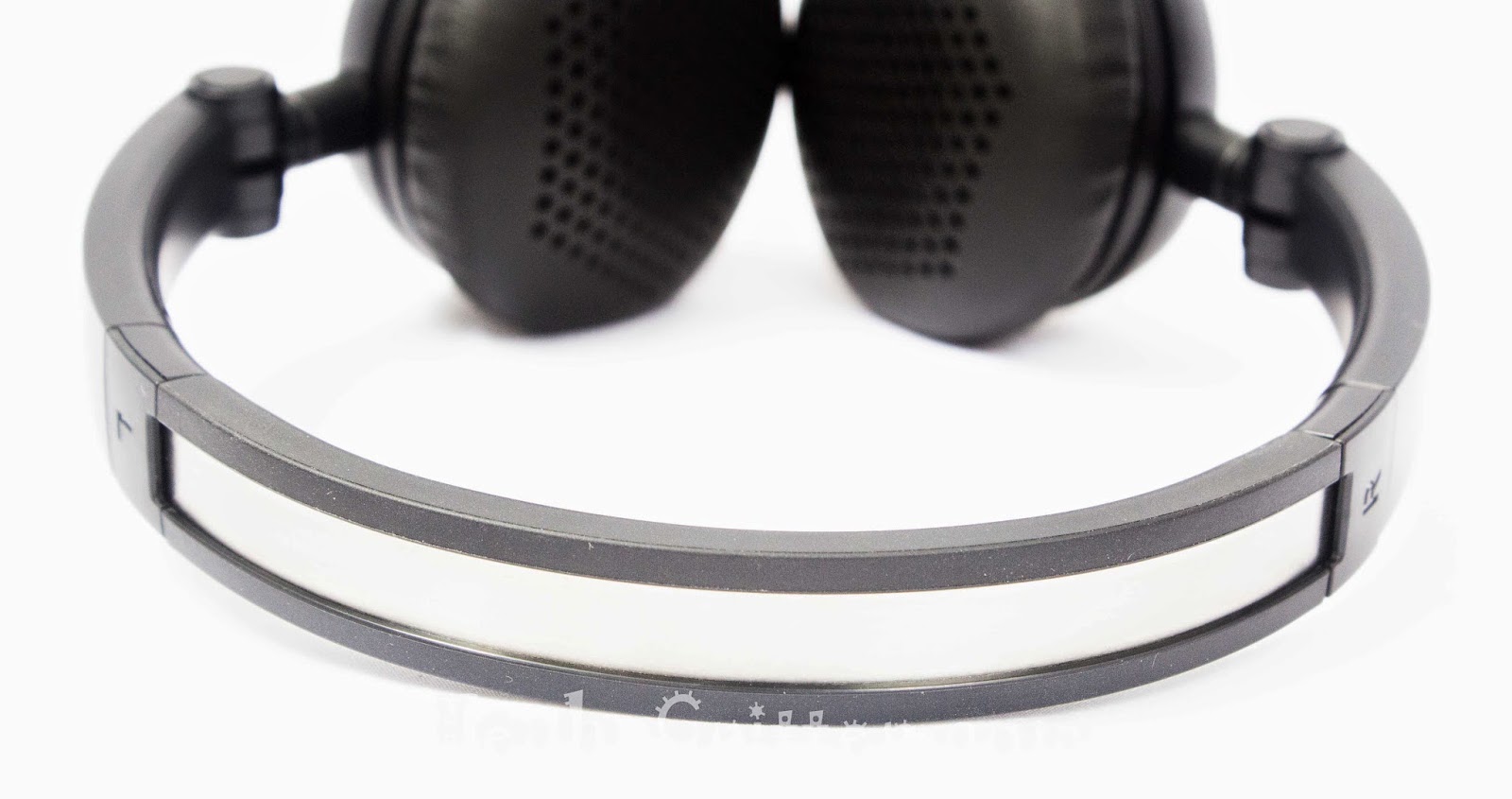 The W670BT is symmetrical in design and is not very flashy. The open back design of the earpiece are cushioned and coated with a very soft and sufficiently thick leather material ensuring that the sound drivers are kept away from contact with your ears. 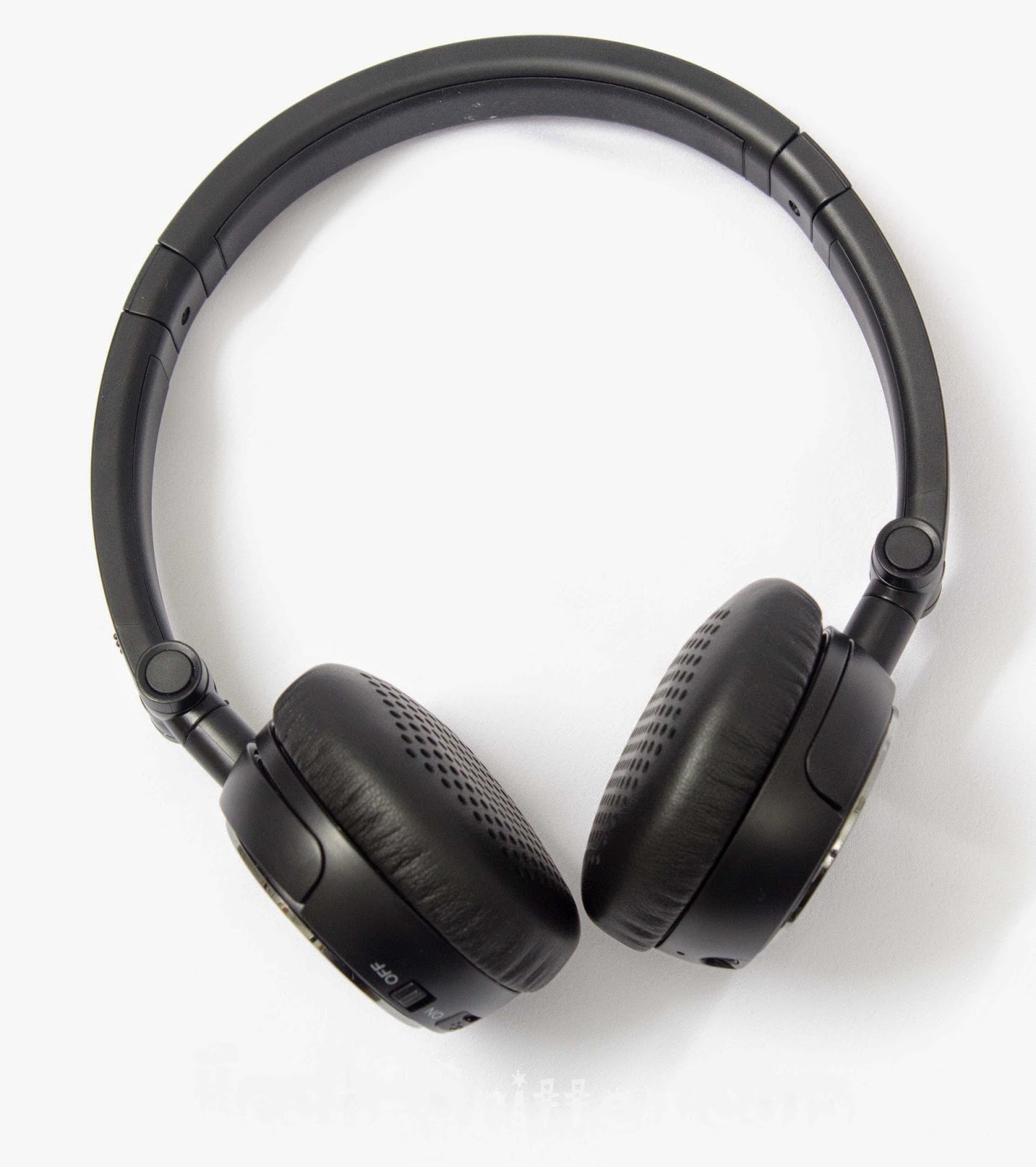 At the top is a strip of rubberised material that makes sure the headset stays in place while in use. I would like it to be a little broader but given the “weightlessness” of the W670BT, I think it’s forgiveable.

Here is another view of the cushions on the earpiece. 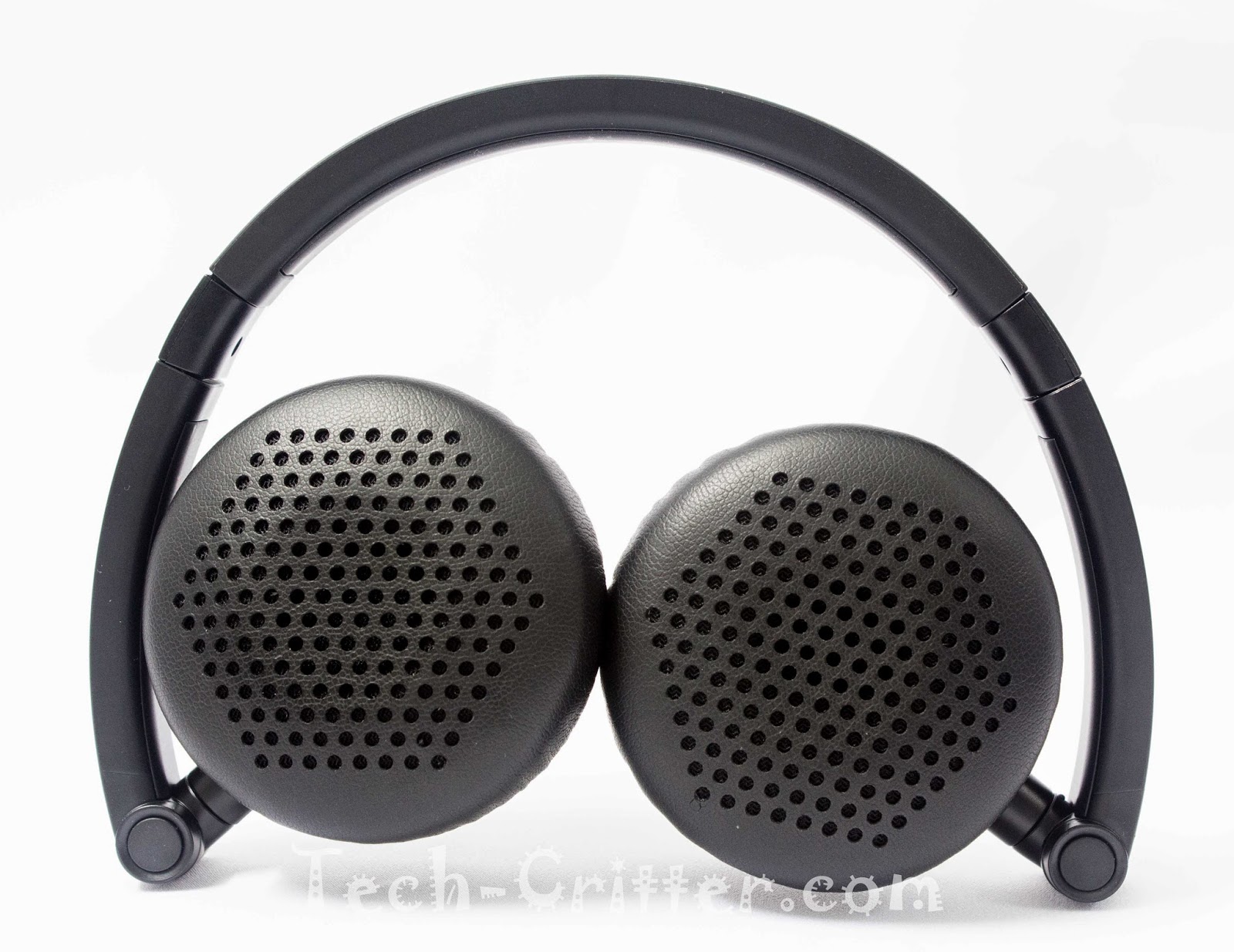 The right earpiece are where the controls are. Pretty straightforward, you get the volume up and down, track skipping and the play/pause button  in the middle that also acts as the answer or call button for your phone; all this surrounded by an elegant chromed ring on the side. At the bottom is where the 2.5mm audio jack is situated along with the built-in microphone. 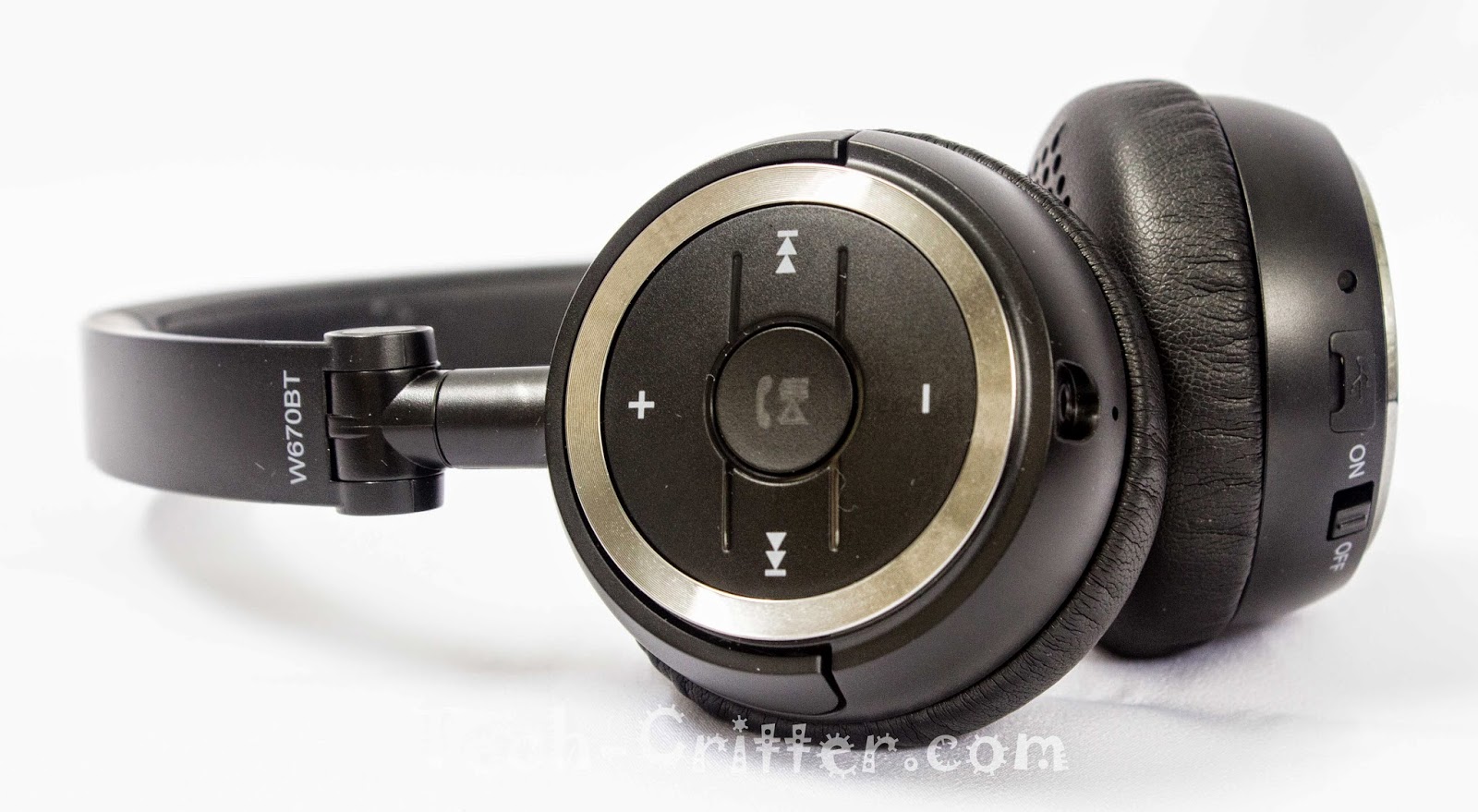 The left earpiece has the same chrome ring (but not as much in functionality) with the Edifier branding in the middle. The on/off button can be found on the underside of the headpiece and a covered micro-USB charging port is right beside it, complete with an LED that glows red when charging (dims when it’s fully charged). 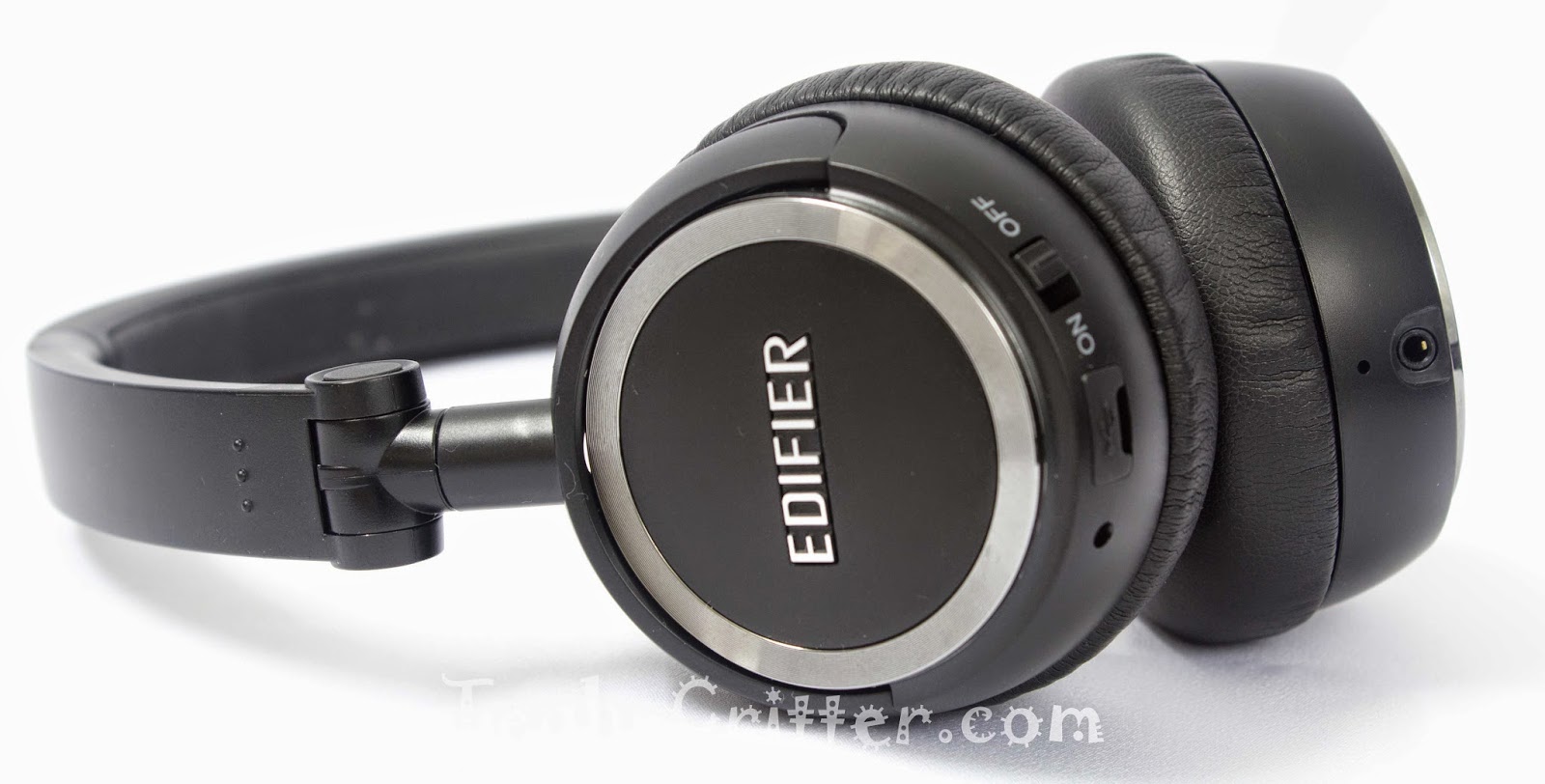 Here is another view of the underside of both earpieces. 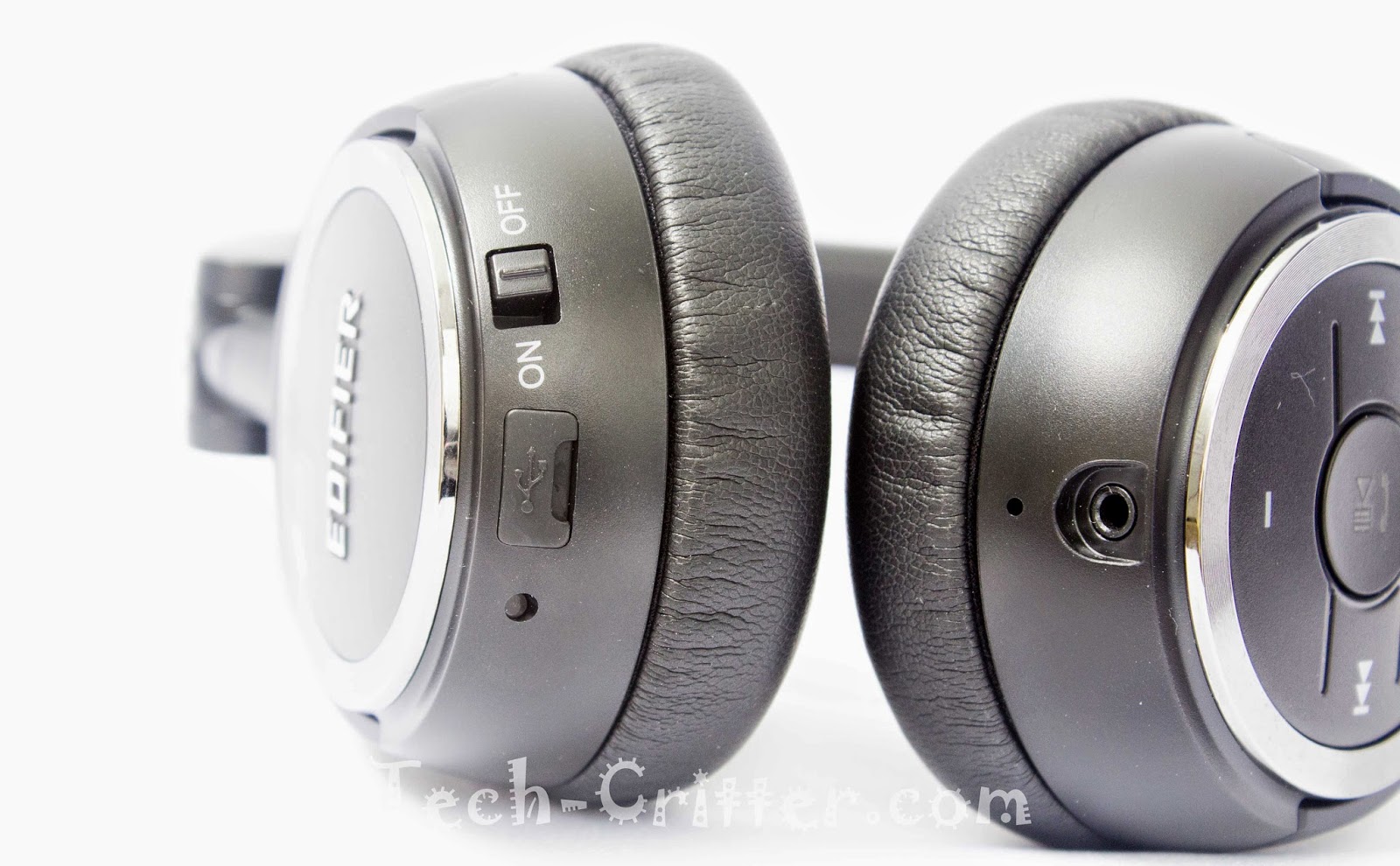 
Before I get to pairing the W670BT to my phone or any other Bluetooth device, I made sure that it’s charged fully so that I could see how long it would last under constant playback on battery.

As it turns out, the W670BT headset lasts over 3 times of my mobile phone before it ran out of juice, which is after it was playing non-stop for a day and a half at about 50% volume at most times. Very impressive for a small package.
The headset is comfortable to wear and it stays put on the ears thanks to sufficient clamping force and the rubberised headband, though I do not recommend excessive “head-banging”. The ear cushions as I mentioned before are soft and is equally comfy. Due to the open design, there won’t be much noise isolation but it does muffle the background noise to ensure a pleasurable listening experience. Even at approx~50% volume, ambient noise is hardly audible inside a moving train.
Using the headset is easy, pairing via Bluetooth is straightforward affair and I detect no disruptions to my audio signals while in use. Controls on the right ear-piece were easy to make out without having to look at them. Buttons are tactile and responsive too! tracks skipped instantaneously and volume controls have very minute adjustments, allowing one to adjust to the precise degree of loudness one prefers. No problems answering and making calls via the W670BT but my voice sounded a little “far” to the person on the other side.
I was taken aback by the sound quality from the 40mm drivers, it is superb with clear vocals, good mid tones and punchy smooth bass. Watching movies is equally enjoyable with the (again) satisfying bass response thumping out rumbles and explosions that doesn’t overwhelm speech and the BGM. Overall, I’d say that the W670BT delivered audio in a better quality compared to my usual ATH-CKL200 from Audio-Technica that has been with me for a few years now.
Conclusion
I truly enjoyed testing the Edifier W670BT, which performed well beyond my expectations in such a small package. Not just in sound quality but also the construction, material and good button placement that made this headset a pleasure to use. There isn’t any notable faults with the W670BT, but if I have to complain, it’d be the microphone making my voice sounded “far” when I’m in a call.
Pros
Cons
In no doubt, the Edifier W670BT gets the Tech-Critter.Com Gold and Recommended awards 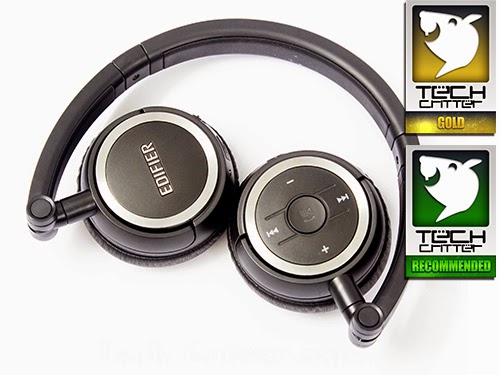