In this article, we’ve tested the Intel Core i7-13700 on the MSI MAG B760M Mortar Wifi and the MSI MPG Z790 Carbon Wifi so we can have a better look at the performance difference between the two. Without any further ado, let’s see which one is better; the MAG B760M Mortar Wifi or the MPG Z790 Carbon Wifi for your non-K 13th-gen Intel Core processors.

The MSI MAG B760M Mortar Wifi ships in a simple package with the essential accessories i.e SATA cables, installation guide, label stickers, M.2 stand-off screws and EZ M.2 clips, and the Wifi antenna for wireless network connectivity. Compared to the previous-gen B660M Mortar Wifi, the accessories seem to be a lot lesser, and it’s sad to see that MSI has decided to not include the screwdriver keychain.

While the printed patterns seem to be different on the MAG B760M Mortar Wifi, the actual design of the VRM heatsink remains the same as its predecessor. The EPS 12V header also remains the same, which is a 2 x 8-pin EPS 12V that supplies the power to your CPU.

Memory overclocking is still possible on the MAG B760M Mortar Wifi and since this board supports DDR5 memory, and DDR5-6000 should be an easy feat even with a non-K Intel CPU that has a locked SA voltage. Despite not having the Q-code Debug LED like the high-end tier boards, the EZ Debug LED is still present on this board. It’s one handy feature you can utilize when working on memory overclocking on this board, which makes troubleshooting easier. The expansion slots on the MAG B760M Mortar Wifi are pretty basic for an mATX form factor motherboard, a PCIe 5.0 X16 slot, a PCIe X1 slot, and a PCIe x4 slot for the basic necessities. The PCIe x1 slot, however, is probably unusable if you install a 3-slot graphics card.

As mentioned earlier, despite having two M.2 slots, the lack of a heatsink on the second M.2 slot is a bit disappointing. So it’s best to choose an M.2 SSD which doesn’t go more than 2000MB/s on both sequential read and write speed, as these SSDs will rarely thermal throttle even without a heatsink attached to it.

For the power design, the MAG B760M Mortar Wifi features a teamed 12+1+1 phase power design that is similar to its predecessor. The configuration consists of the Renesas RAA229132 PWM controller and Renesas 220075R0 power stage which are rated at 75A each. 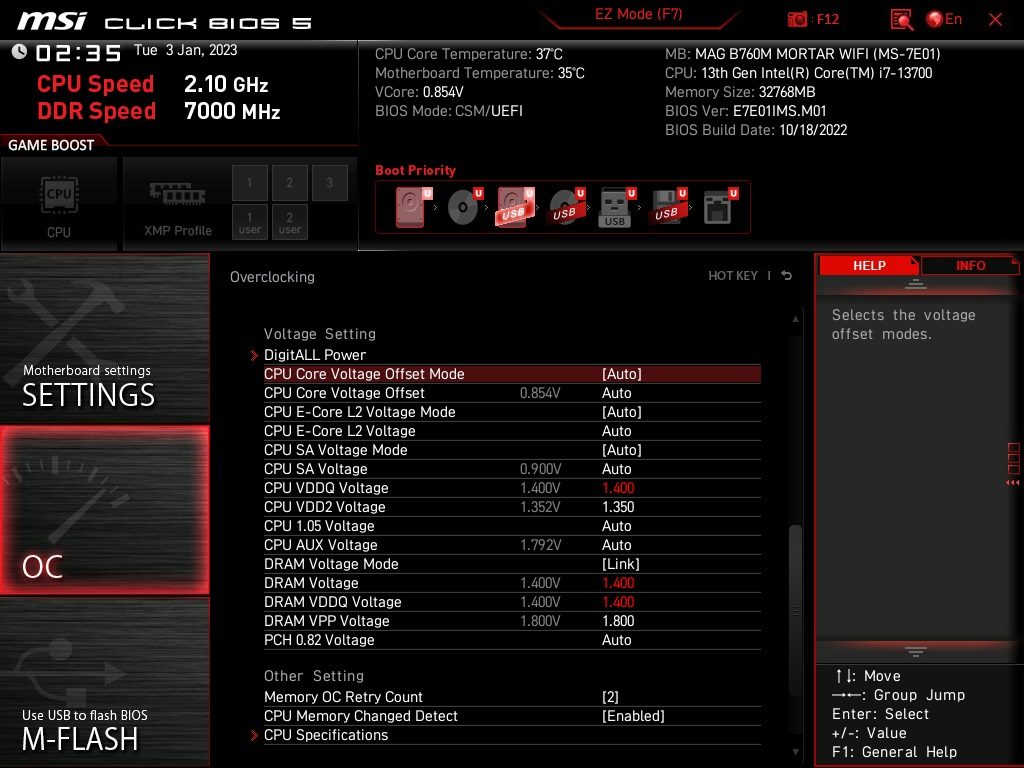 In this test, we’re using an Intel Core i7-13700 and DDR5-7000 CL40 is the highest memory frequency we’re able to achieve with the locked system agent voltage. Compared to the Core i9-13900K, the voltage required for DDR5-7000 to stay stable is slightly higher, so we settled down with 1.35V for VDD2 voltage, and 1.4V for VDDQ and DRAM voltage. Though DDR5-7000 CL40 doesn’t seem to be doing any good in gaming for now with the B760M Mortar Wifi.

For gaming purposes, I’d say DDR5-6000 CL30 is still recommended, so long that the DDR5 kit you’re using is at least a Hynix M-die kit. the mentioned settings can be achieved easily even on the Intel Core i7-13700, and you’ll only need about 0.85-0.86V for system agent voltage, but Hynix M-die kits will require higher VDDQ and DRAM at about 1.435V. We then put the memory settings to the test on both the MAG B760M Mortar Wifi and MPG Z790 Carbon Wifi to see if we are able to observe any performance difference between the boards. While the numbers seem to be pretty close, we can still see that the performance with the MAG B760M Mortar Wifi is a bit lower even though the memory settings we’re using are both DDR5-6000 CL30.

We have also captured the temperature reading captured in the VRM and the chipset heatsink area during load using a thermal imaging camera, which is shown to be at 47°C and 41.3°C respectively, and this is without any obvious airflow in the region. With a well-planned airflow setup in a properly setup system, the thermal performance can be further improved and you’ll see a lower VRM and chipset temperature during load.

Feature-wise, the B760M Mortar Wifi is a decent alternative for those who want to upgrade to the 13th-gen Intel Core processors or DDR5 memory without paying extra for the premium features that they won’t need most of the time. My only dissatisfaction so far is the lack of the M.2 heatsink on the second M.2 heatsink slot. PCIe 5.0 support, 2.5GbE LAN and Wi-FI 6E, and USB 3.2 Gen2x2 connectivity are also some of the essential features the B760M Mortar Wifi has to offer and it’s the features that most people can actually use as compared to other premium features that are only available on the high-end tier Z790 chipset motherboards.

While we are still yet to receive any information on the local MSRP as this article is being prepared, the price shouldn’t be too far off from the RM 899 MSRP as seen on the previous-gen B660M Mortar Wifi. And if that’s the case, I’d say the B760M Mortar Wifi is a considerable option for those who finally wish to upgrade to the 13th-gen Intel Core processors from the 10th-gen Intel Core processors, or older.

Update: The MSRP should be RM 985 but as of now, MSI Malaysia has no plans on bringing this model into Malaysia.