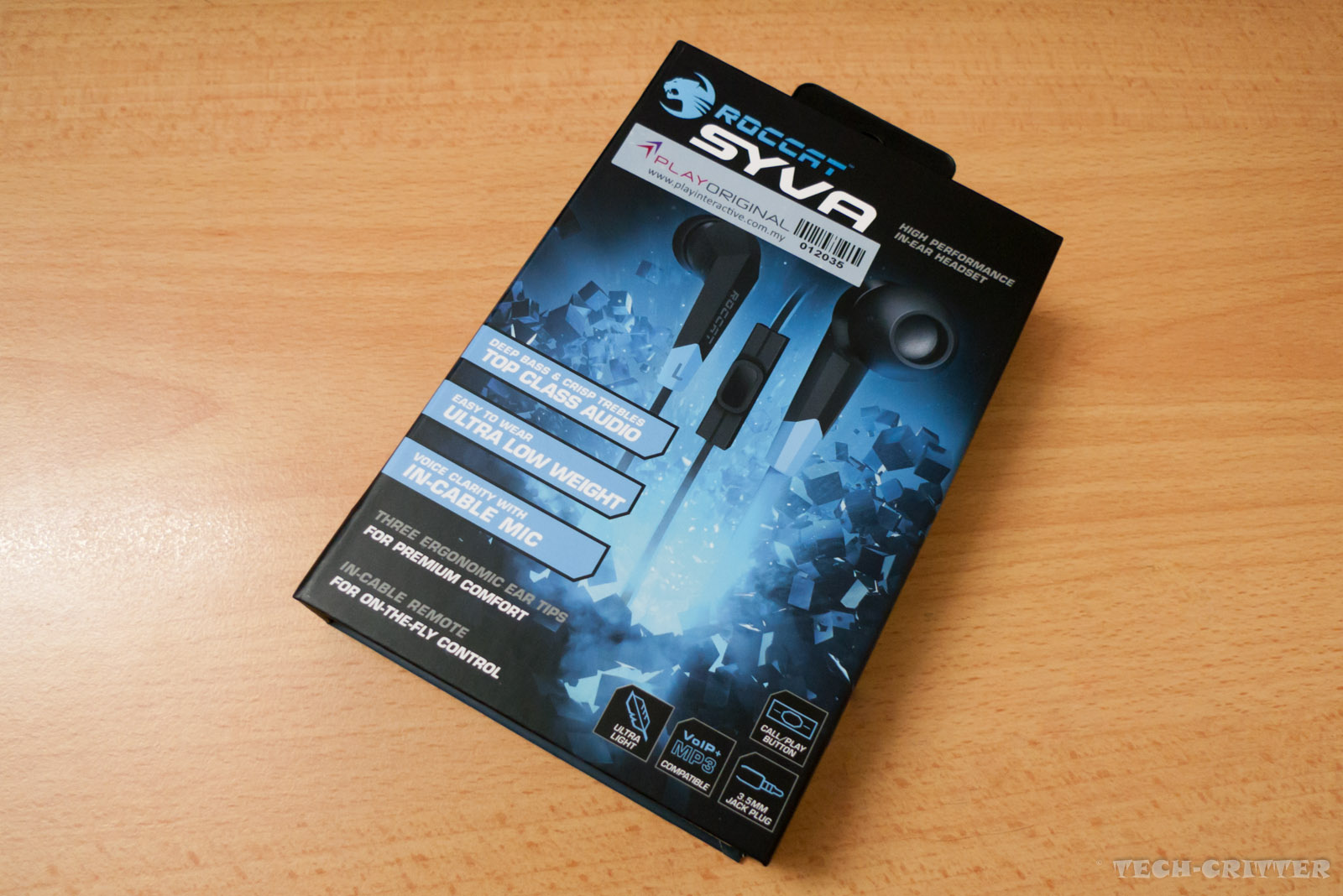 The Syva – High Performance In-ear Headset is the result of the exceptional style and quality ROCCAT™ is renowned for. If you’re a smartphone- or notebook-user, an avid music listener and an out-and-out hardcore gamer, the Syva’s got your back – delivering top class audio in every case.
Looking for a portable headset that works on your PC as well as your smartphone? read on for our thoughts on this headset.
SRP for ROCCAT Syva is MYR139.

The headset is shipped in this little fancy box. 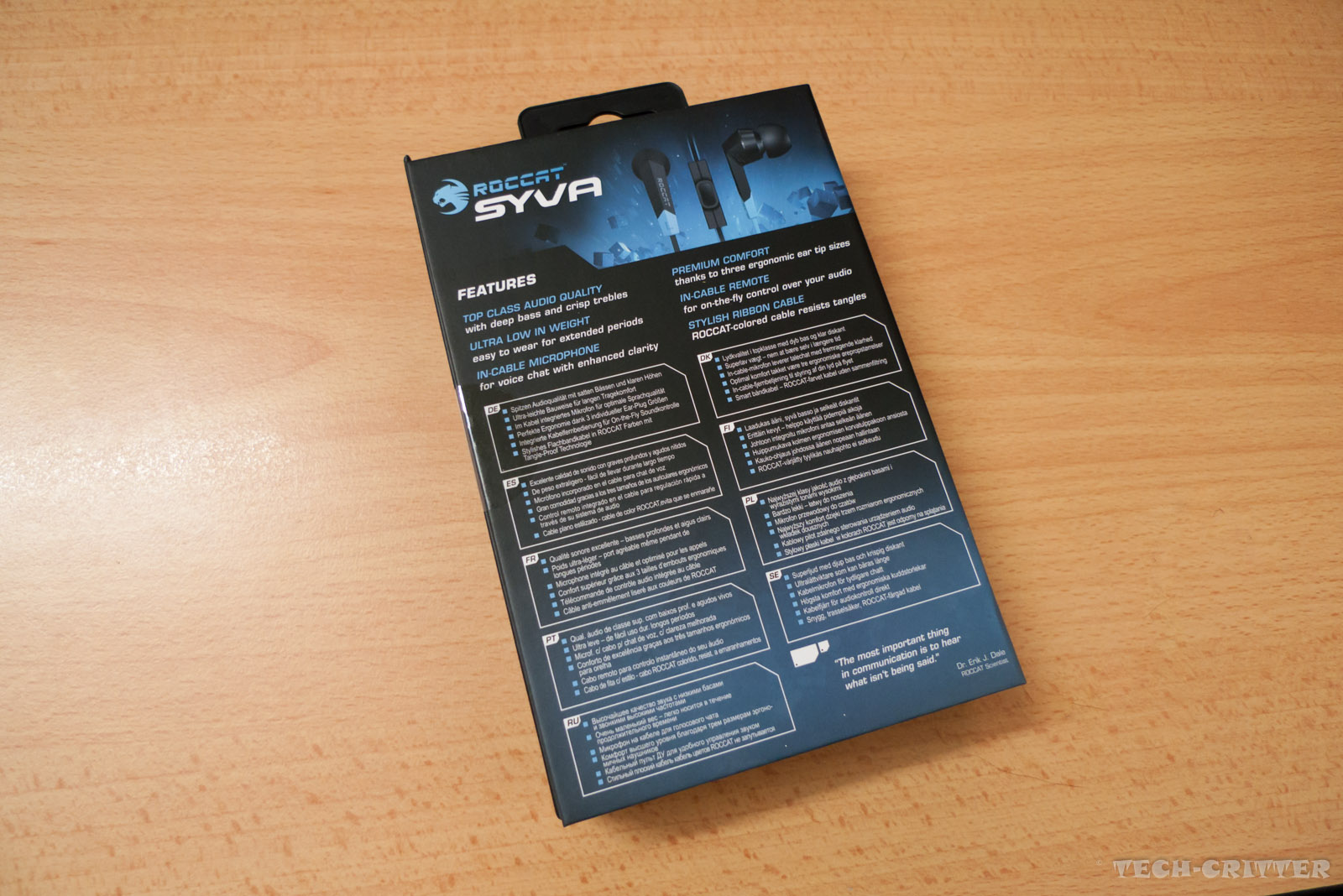 Product information in various languages at the back of the box. 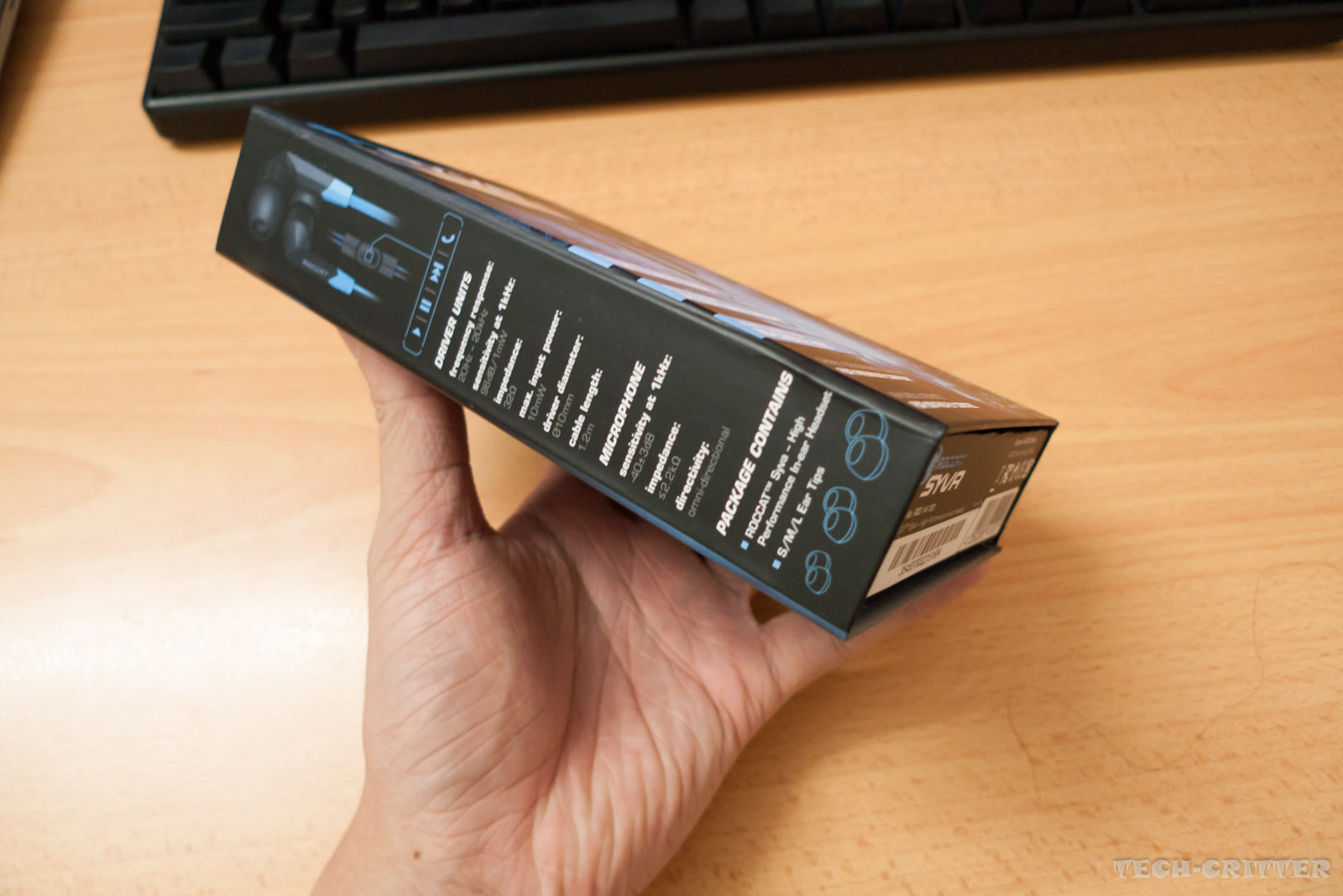 More details of the headset. 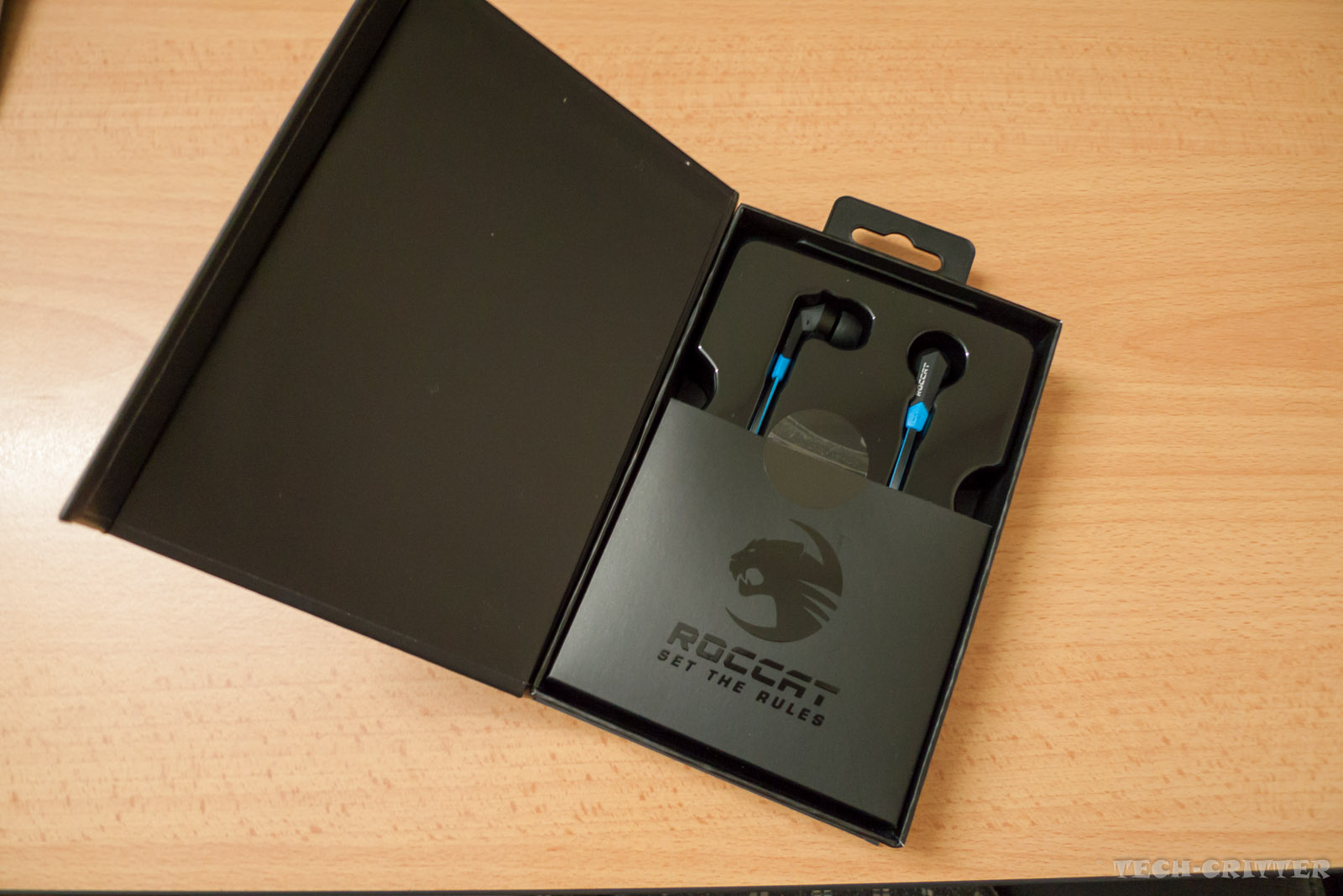 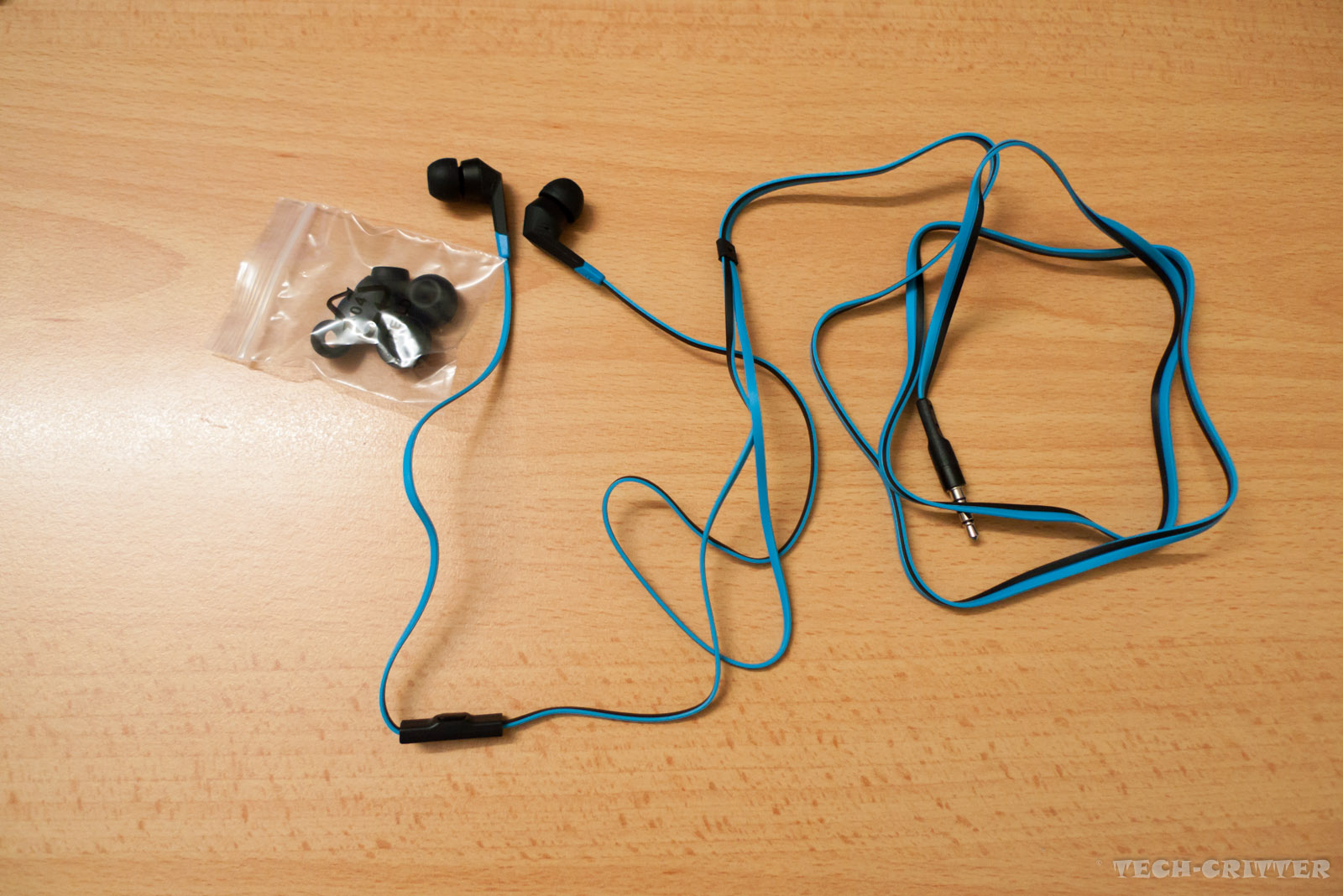 Taking everything out of the box.

What you get in the box: 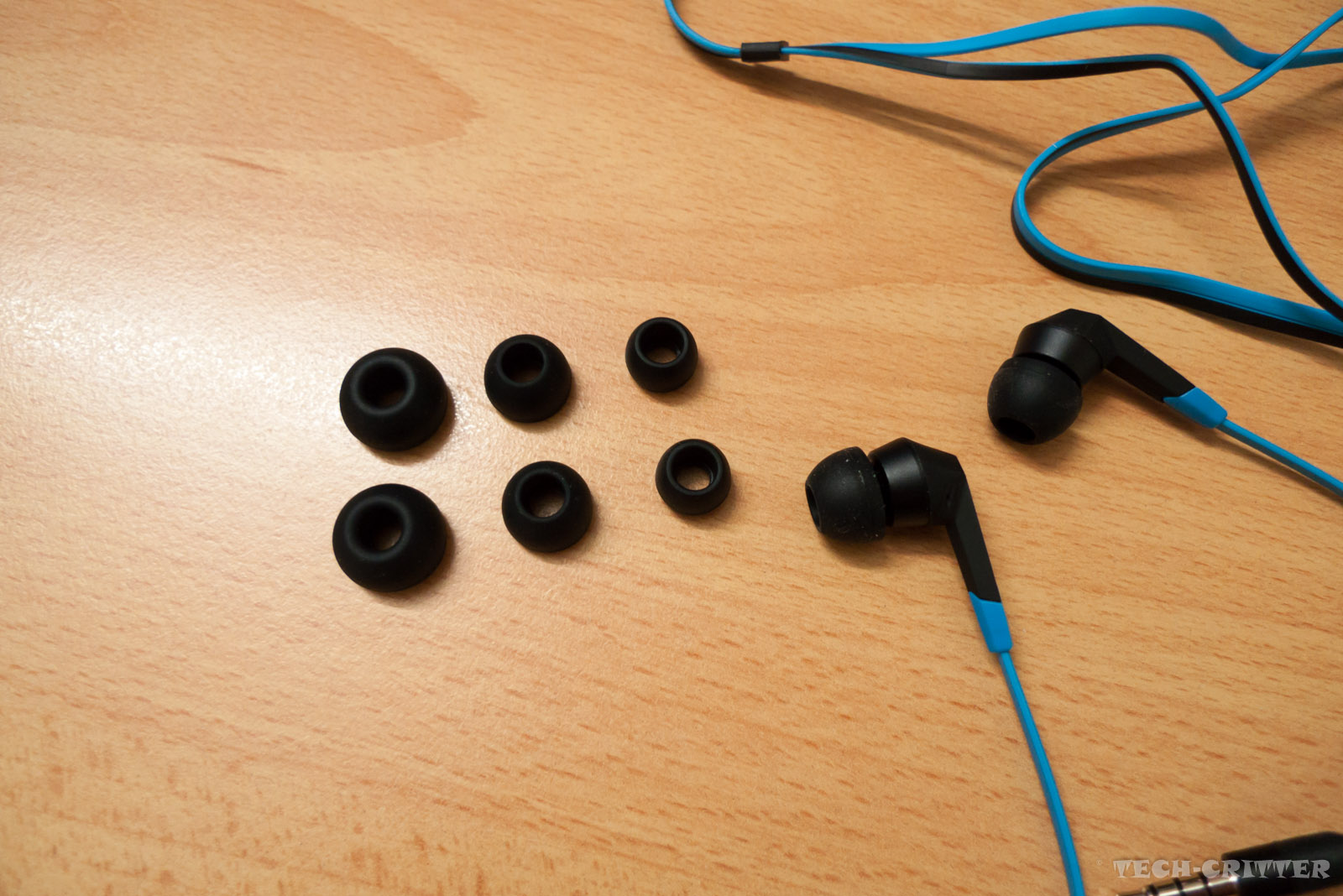 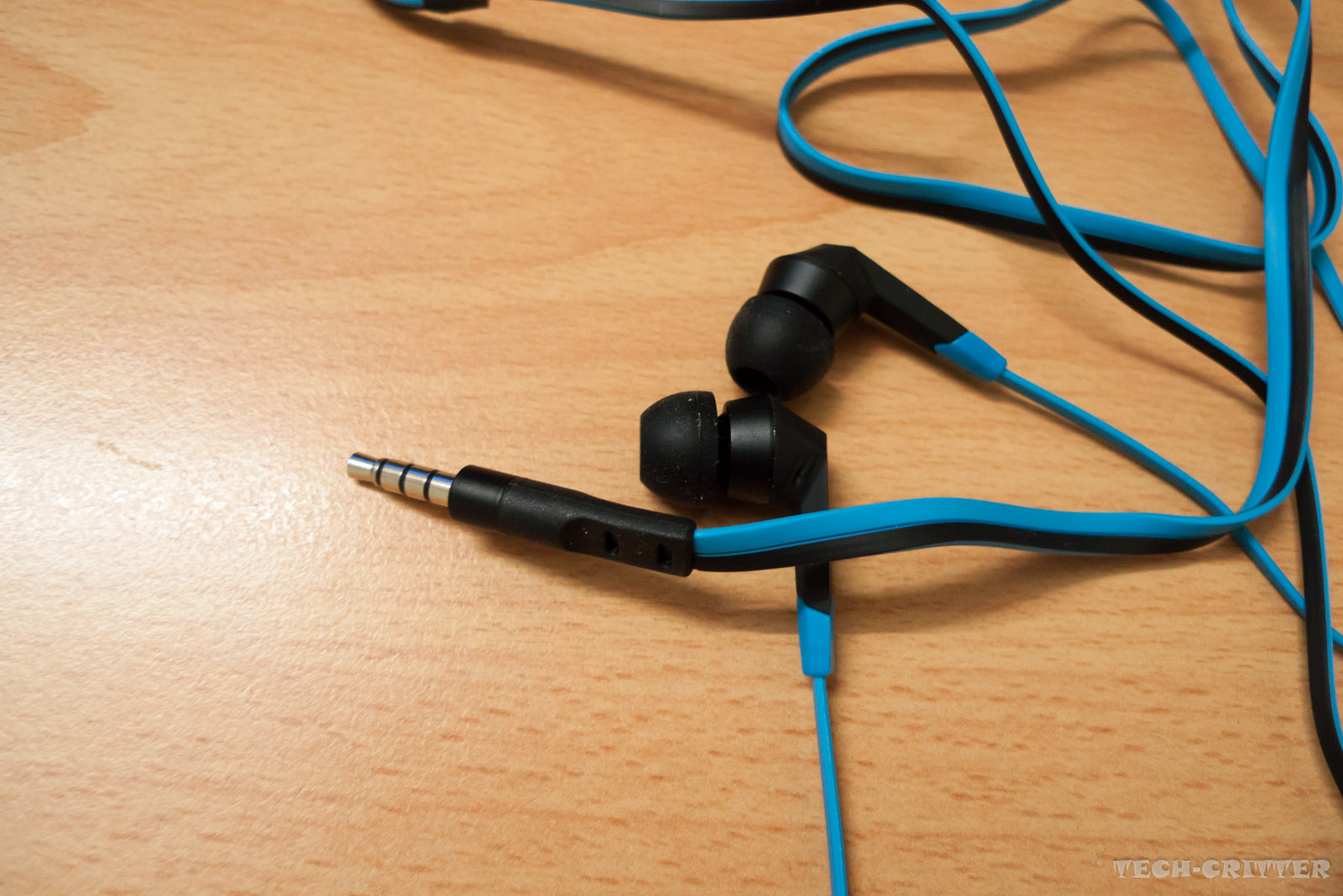 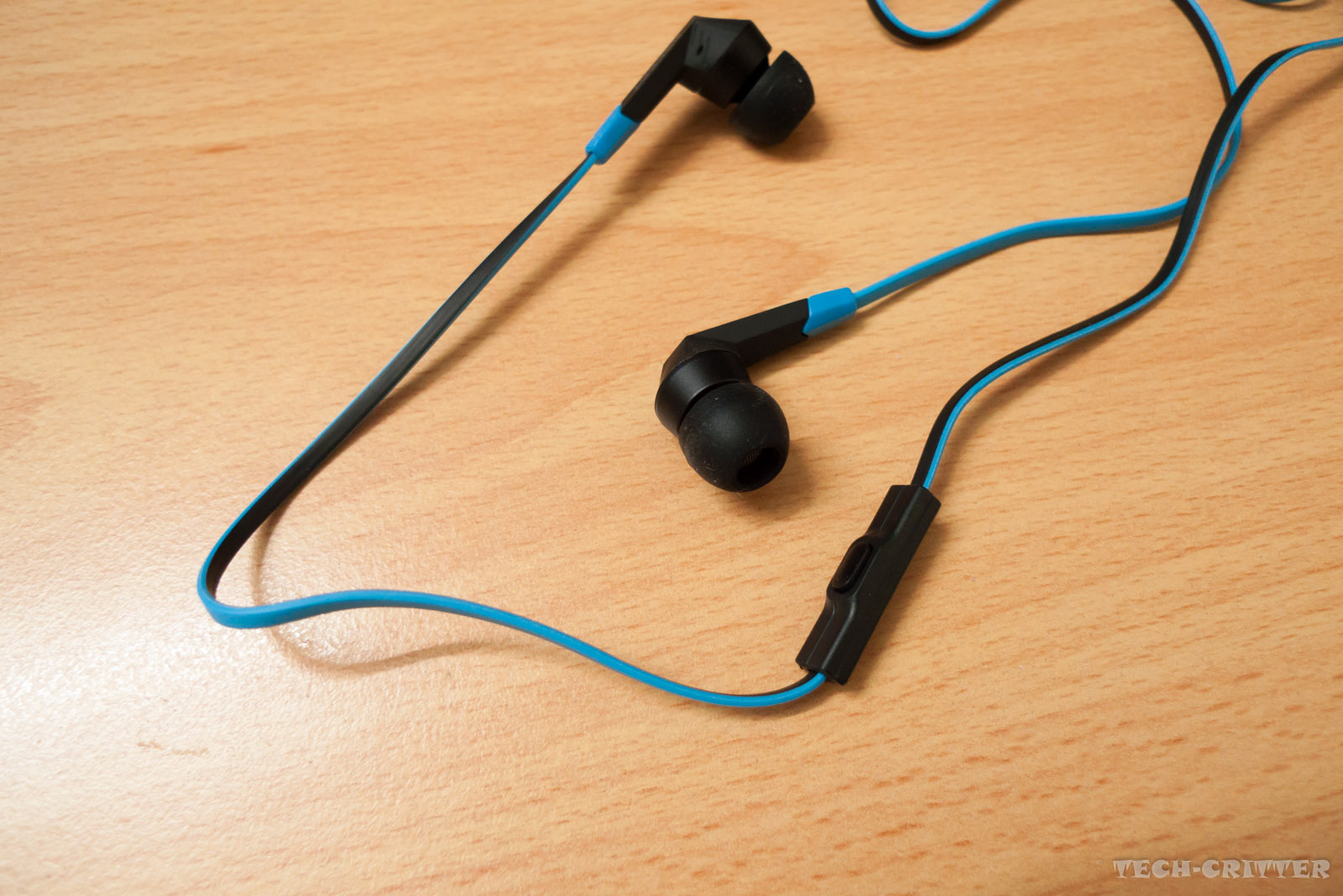 There’s a mic & controller module on the cable of the left bud. 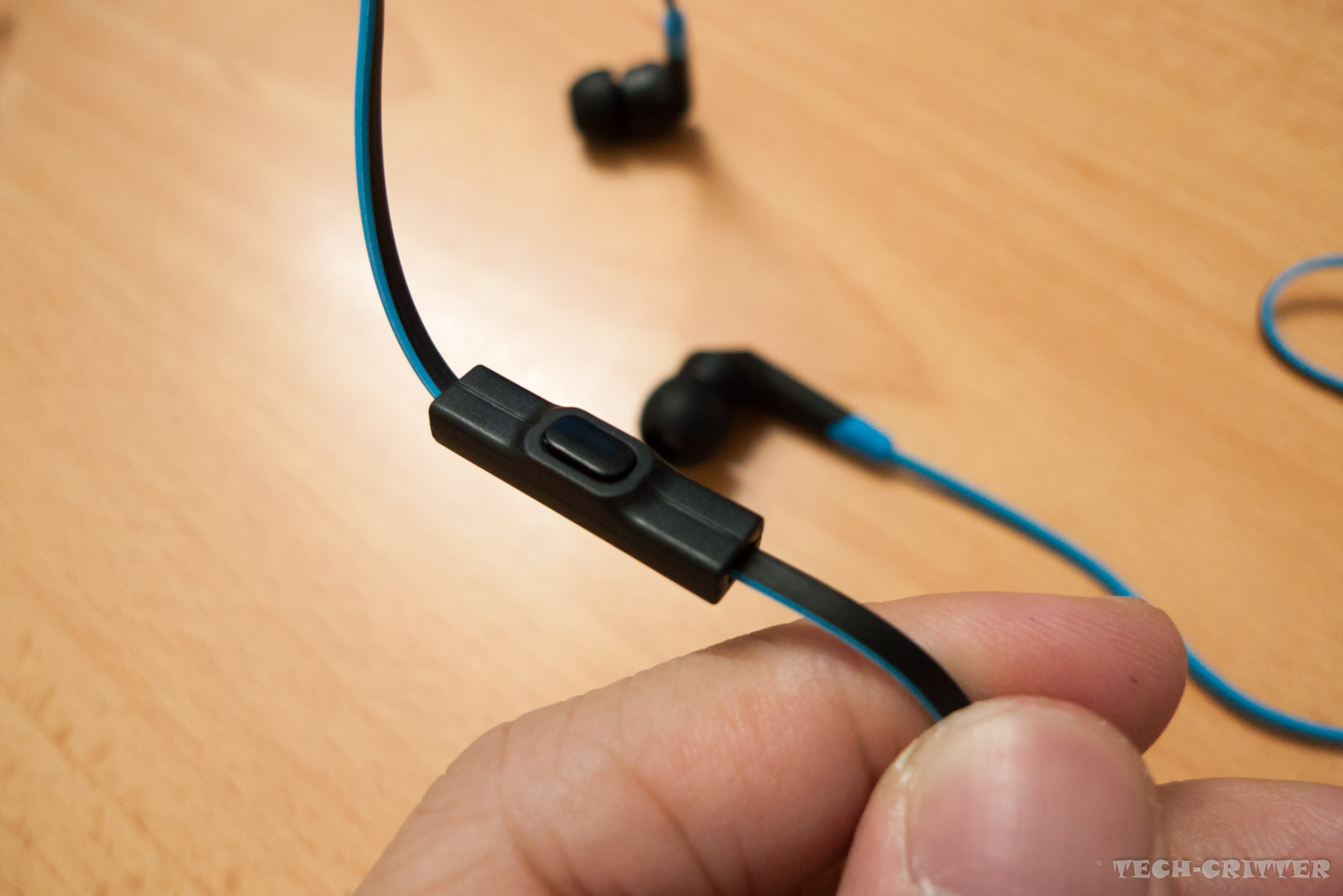 Close up of the mic & controller module. The controller has only one button which would do all the Play/Pause/Next/Answer call actions. 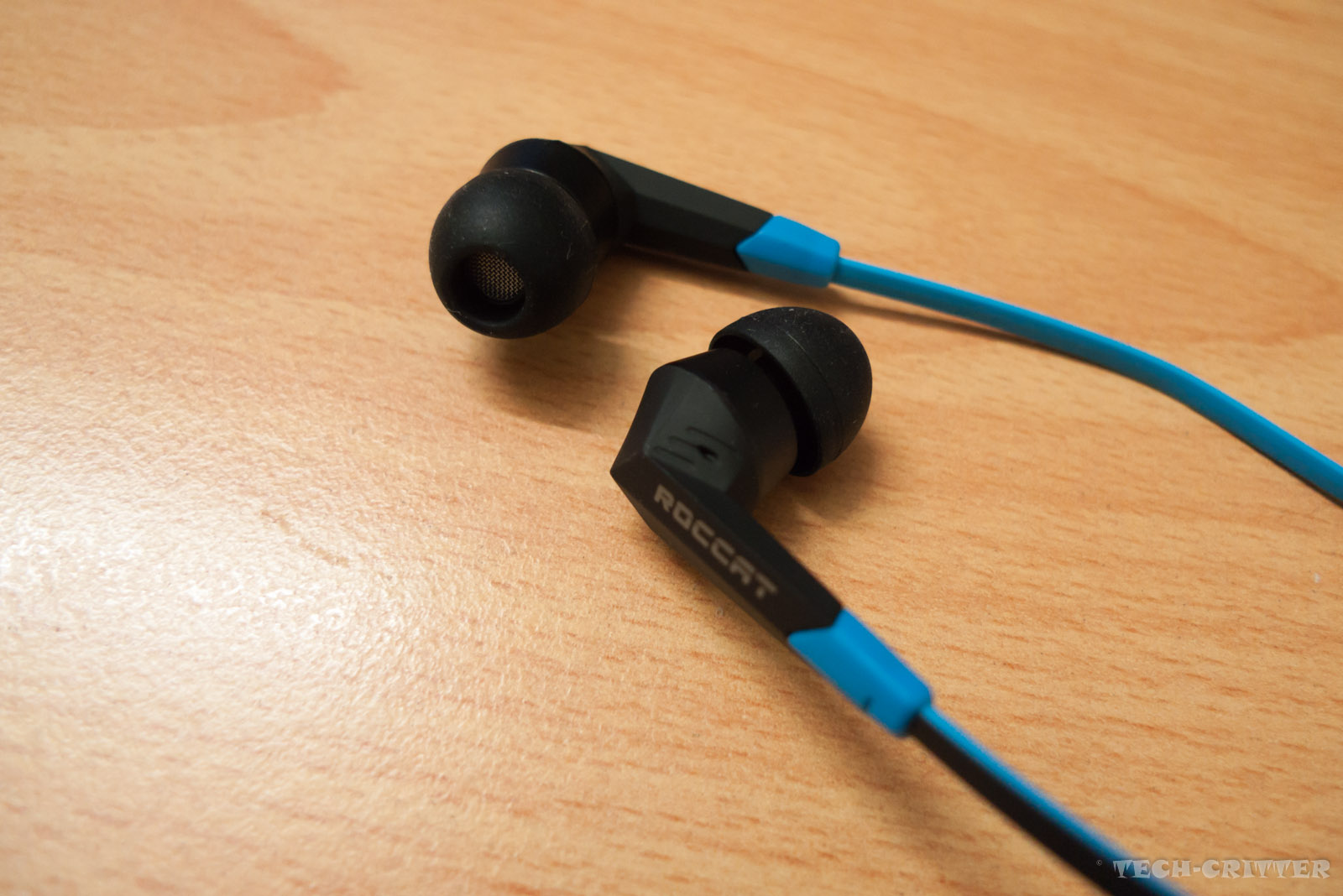 Close up of the headset. 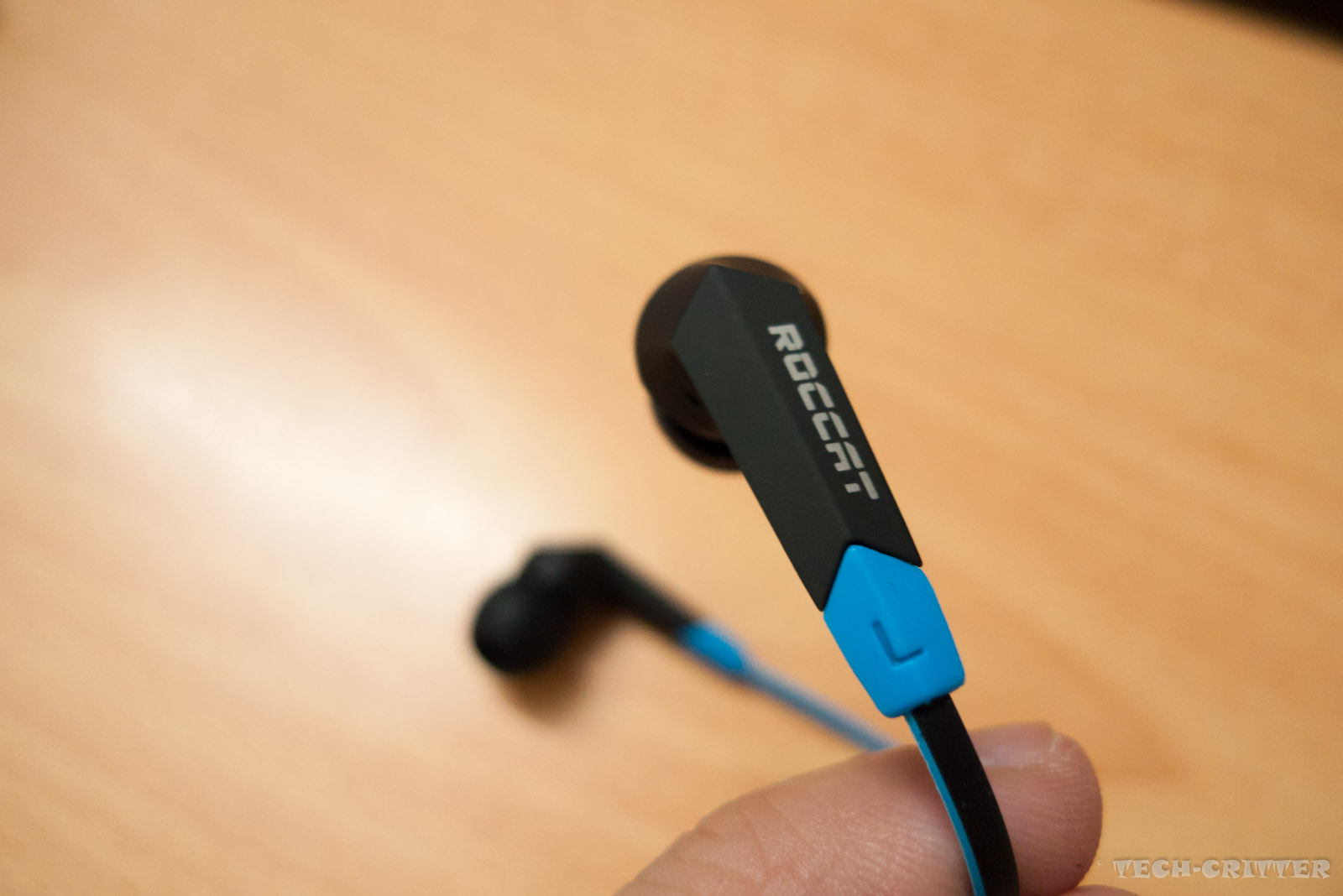 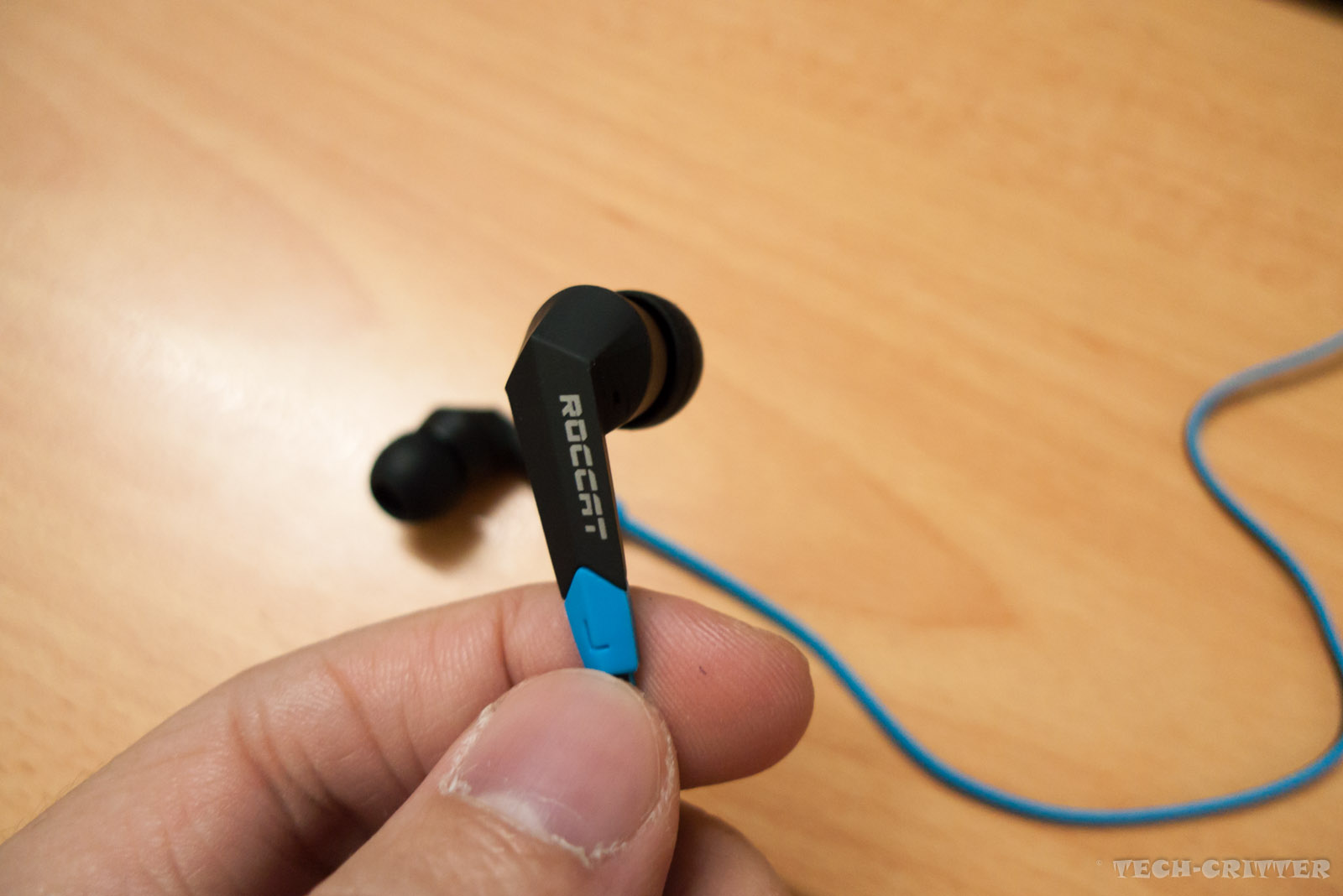 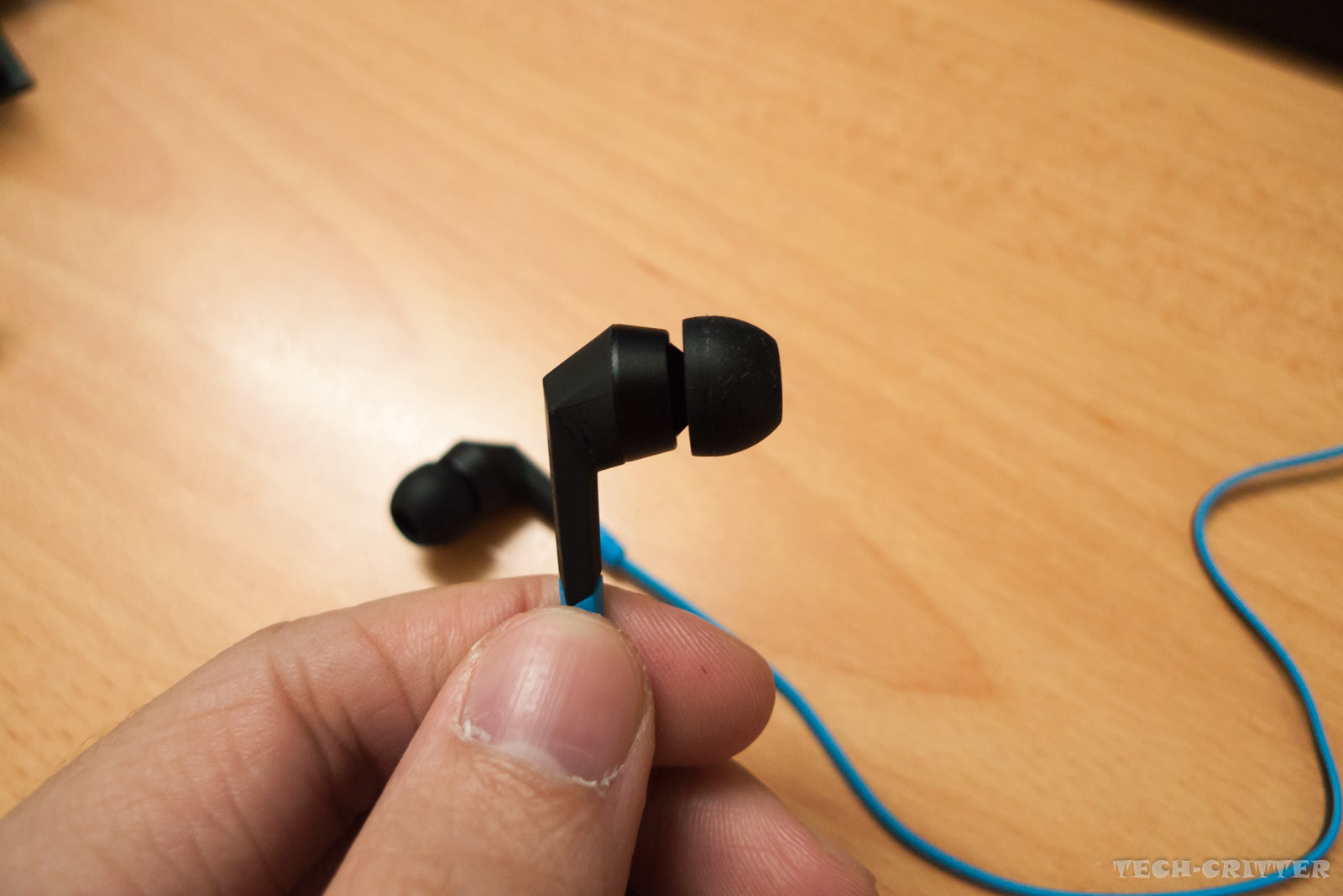 It might look really good on the eyes, but sometimes I would feel the sharp edges is hurting my ear.

Syva is claimed to be high performance in-ear headset that delivers top class audio along with functionality. After two weeks of audition, clearly I’m doubting the claim of “top class” audio. The sound quality is rather slightly above average, or perhaps average if I were to compare it to other higher end in-ear headset.
The sound profile is more into heavy bass side, though the treble is kinda crisp at times but it is easily overpowered by the bass. That makes the headset more suitable for gaming purposes which has loads of action sounds and such. For music, it depends whether you’re a bass-head or not. Still, take my comment on the sound profile as a grain of salt as different individual has different preferences in their music taste.
Ironically, since ROCCAT markets the Syva as the headset for gamers on the go, I thought they’d at least provide a carry pouch, but they didn’t. The missing pouch is not really a major downside of this headset package, instead, the major flaw of the headset would be the sharp edged design. For my case, it affects the comfort of wearing the headset as the sharp edges would touch on my inner ears. I’d be more than grateful if they have stuck to a curved design.
Priced at MYR139 retail, I really can’t complain much given that the headset comes with a set of relatively good features such as ribbon cables, in-cable microphone & remote, and better-than-average sound quality.