Gigantic high-performance CPU coolers such as the Noctua NH-D15 is undoubtedly one of the best around but big isn’t necessarily a good thing, especially when you’re building a small form factor or a slim type build. Most the small form factor and slim type builds are not meant to accommodate these titans but people still tend to go for a 3rd party CPU cooler as they find the Intel stock cooler insufficient.

We’re looking at the Shadow Rock LP from be quiet! this time, special thanks to be quiet! for sending over the review unit to make this possible. Retailed at RM211, the be quiet! Shadow Rock LP isn’t a budget friendly CPU cooler but be fully aware of it’s near-zero compromise build quality – let’s find out what kind of performance can the Shadow Rock LP deliver and most importantly, is it worthy enough for you to spend that amount of cash for? The minimalistic dark themed box displayed the be quiet! branding on the top right with an image of the Shadow Rock LP in the middle. The bottom part depicts the name, theme and some features be quiet! has. This cooler is categorized as a premium product as displayed on the silver-strip at the side. At the back of the box, you’ll find not only the technical specifications of the cooler itself, but also a labeled diagram which be quiet! has decided to let the picture speaks for itself. Unlike most CPU cooler of the same tier that uses 4mm-diameter heat pipes, the Shadow Rock LP utilizes 4 copper heatpipes with 6mm in diameter for better cooling performance. The Shadow Rock LP’s height is only at 50.4mm with the bare heatsink, and 75.4mm with the fan mounted, making it an ideal choice for slim type chassis. As usual, be quiet! kept things clean and tidy by covering the tip of the heat pipes with aluminum caps and a brushed aluminum top cover with shiny be quiet! logo as the finishing touch. Talk about the added touch of premium! Insert the screws through the mounting holes and place rubber rings through the protuded screws to prevent the metal spacers from direct contact with your motherboard.

Secure the metal spacers and you’re ready for the mounting bracket. Align the holes on the mounting bracket according to your socket type and secure it with the scews provided. Once you’re done with the mount, secure the heatsink using the aluminum bar and screws, followed by mounting the fan to the heatsink with the fan bracket provided. Do note that memory compatibility is greatly affected by the orientation of the cooler and the default orientation will hinder the 1st DIMM slot useless. 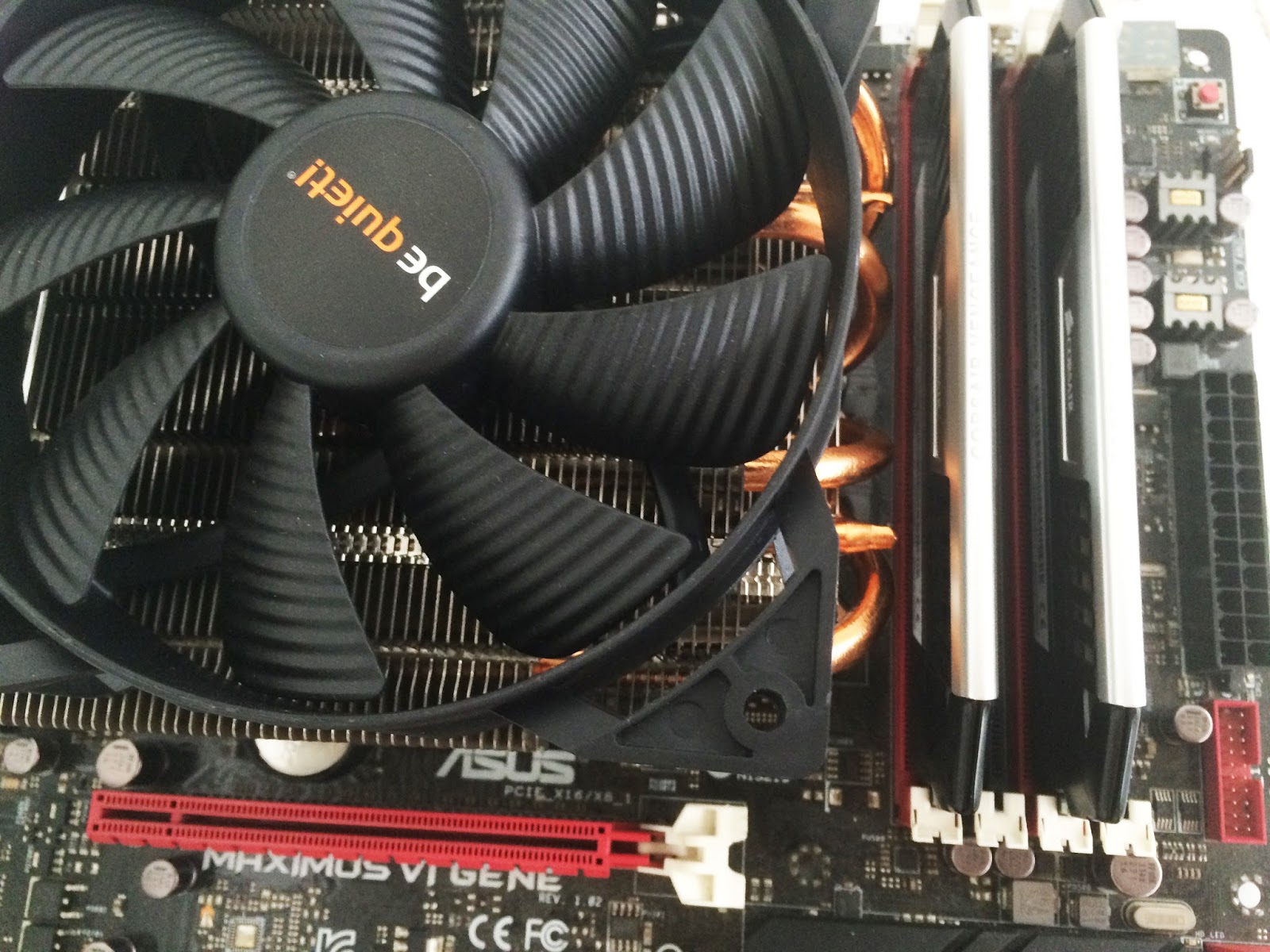 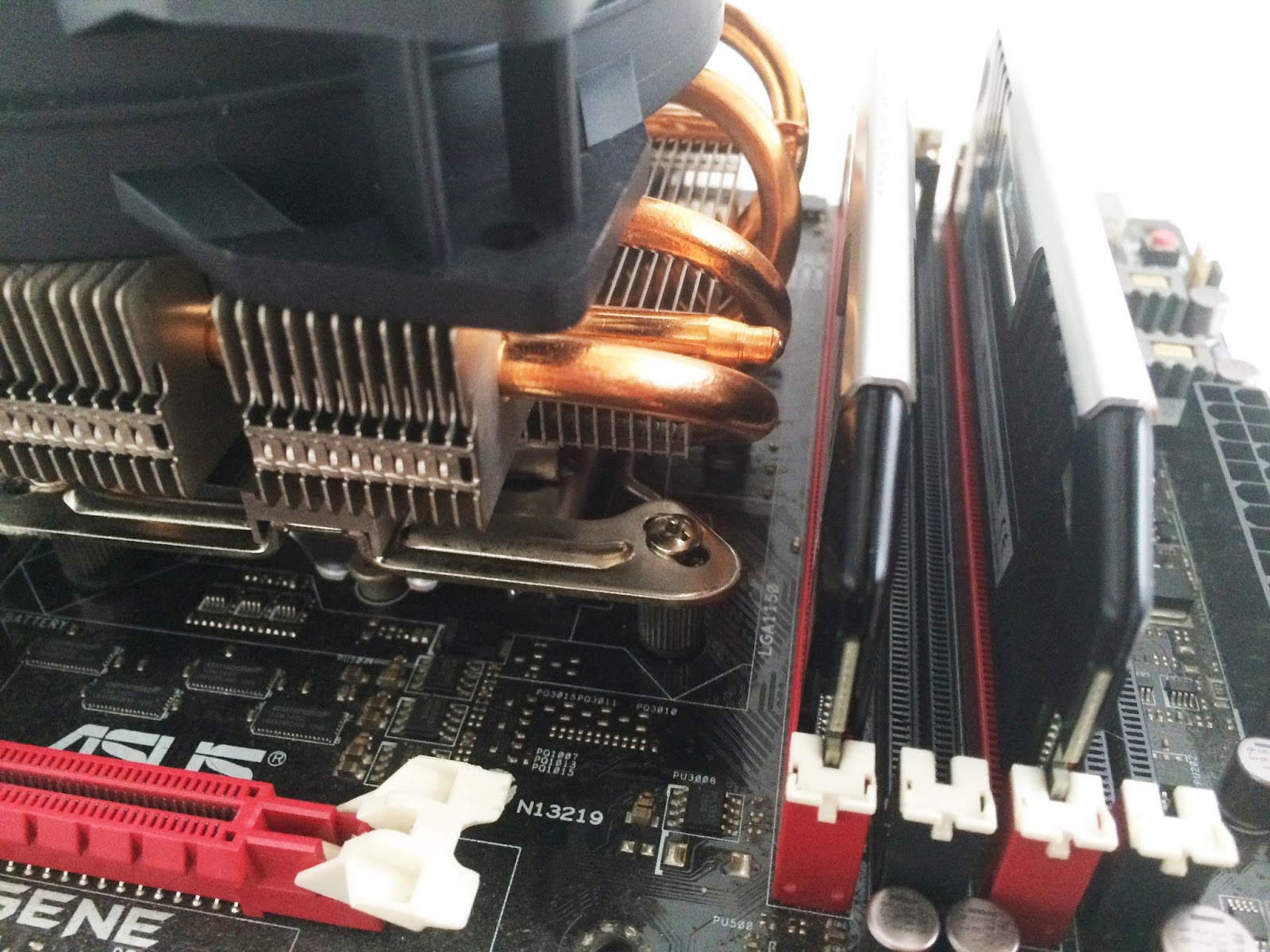 Still, this can be easily fixed by installing it with a different orientation.

Moving on to the performance test, we ran the CPU stress test utility Prime95 with the option ‘In-place large FFTs’ for maximum heat from the CPU. Our room temperature throughout the test is 30ºC in average and the stress test is repeated for several times in order to get a stable and consistent temperature reading. The final result is presented in the graph as below: The Intel stock cooler pretty much failed the test when it comes to cooling down an overclocked CPU, as it went straight to 100ºC within seconds. The be quiet! Shadow Rock LP however, did manage to stay still at 88ºC throughout the test.

While the cooling performance isn’t really that jaw dropping, the solid build quality, near dead silence operation and low profile design undoubtedly makes the Shadow Rock LP one rock solid CPU cooler for slim type build like HTPC, console PC that doesn’t gives out the amount of heat like a high end system with overclocked CPU.

Installation is a breeze and it doesn’t took much of our time to get it installed. Memory clearance does seems to be an issue at first, but that can be easily fixed with a change of orientation which be quiet! never actually stated in the user’s guide – hopefully they’ll pay a little extra attention to that.If acoustic performance is what you’re looking into for your small form factor build or slim type build, the dead silent and decent cooling performane are the qualities of the be quiet! Shadow Rock LP that’s worth looking into as a replacement for the Intel stock cooler.