Since the RGB craze started, we can see brands RGB-fying almost everything they can think of, ranging from PC components to peripherals. Razer for one, has RGB-fied majority of their products i.e gaming keyboards, gaming mouse, hard gaming mouse pad and gaming headset.

The Goliathus Extended Chroma comes in the usual packaging where the mouse pad is rolled up and fitted inside the box. Other than the product name, type and the Razer Chroma support icon, you won’t find much information here at the front of the box. You’ll find some highlighted features of the Goliathus Extended Chroma at the back of the box i.e micro-textured cloth surface, the non-slip rubber base and the electroluminescent wire (EL wire) for RGB lighting.

There’s a cut-out at the side of the box, which allows you to ‘feel’ the texture of the cloth surface of the Goliathus Extended Chroma. 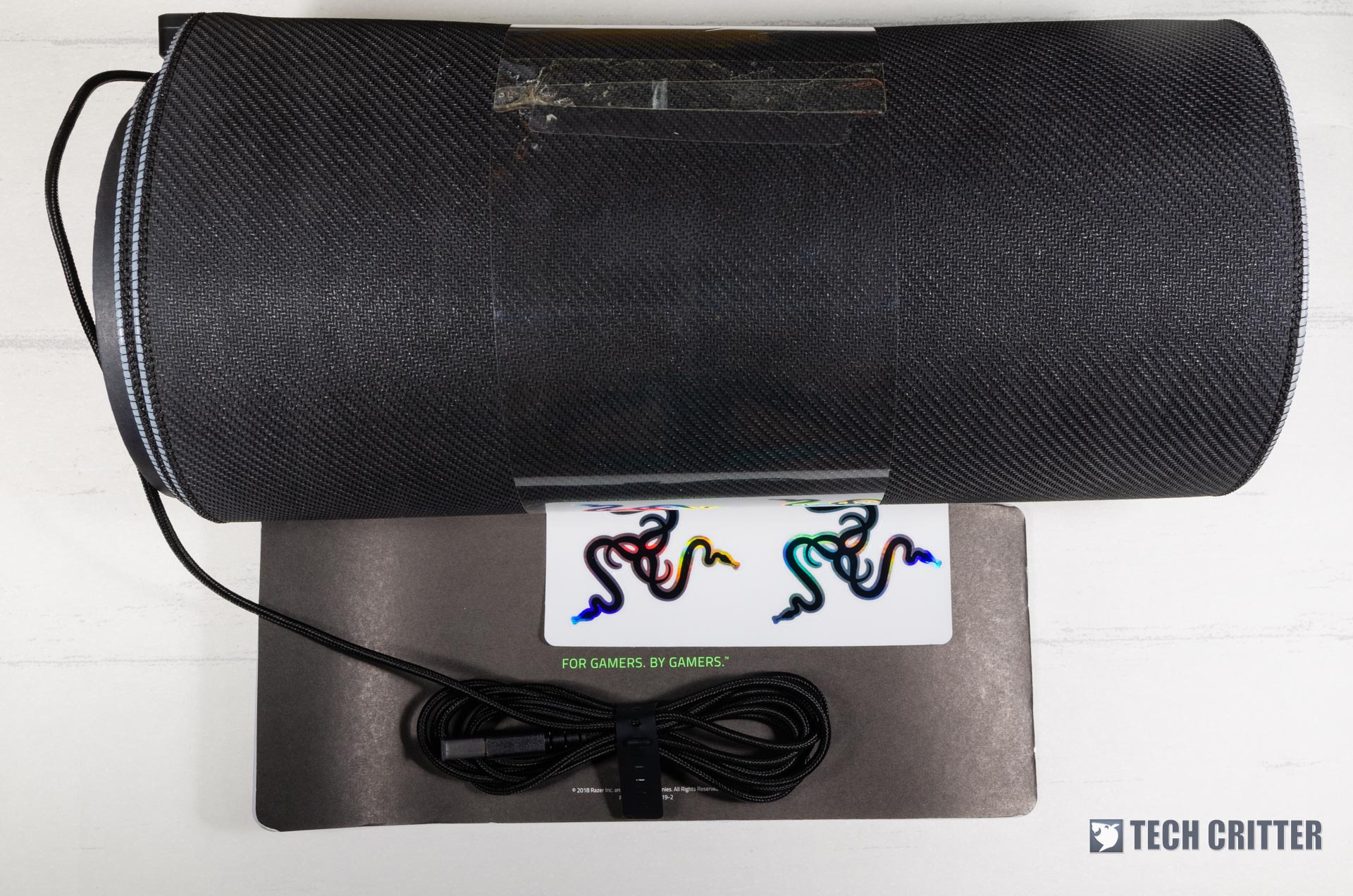 Inside the box, you’ll find the familiar looking Razer stickers and user’s guide as usual, along with the Goliathus Extended Chroma. The only downside we can see as of now, is that the RGB controller only serves one purpose, which is to power up the RGB lighthing for the EL wire. It’ll be better if Razer can consider of adding one or two USB port to it, so that the USB port will not go wasted just for the sake of powering up RGB lighting only.

Even though XL sized is more preferred, the Goliathus Extended Chroma will still get the job done nicely. You can have your full sized keyboard placed on top of it while still have enough space to move your mouse around. If you’re the type of gamer who prefer to have low DPI settings, you might want to consider of getting a tenkeyless keyboard for some extra action with that extra space.

We’ve tested the Goliathus Extended Chroma with 3 different gaming mouse, the SteelSeries Xai, Razer Mamba Wireless and Cooler Master Sentinel III. The smooth cloth surface does allows easy maneuver, especially for those of you who prefer low DPI settings on FPS games. The EL wire on the side of the Goliathus Extended Chroma however, can causes some minor discomfort if you’re resting your entire forearm on the desk with your skin brushing against the edge.

While the RGB lighting is easy to configure with Razer Synapse and not blindingly bright, the RGB controller is taking up a functional USB port just for the lighting effect. It’ll be great if Razer would consider to make the RGB controller a USB hub as well for some extra connectivity options.

If you’re planning on completing your Razer Chroma setup with a XL sized cloth mouse pad with RGB lighting, the Goliathus Extended Chroma is priced at RM 239 – which is around RM 90 on top of the non-RGB Goliathus Extended at RM 149.

With all the buzz going on at CES 2023, Razer has jumped on the train and showcased innovative technologies for...