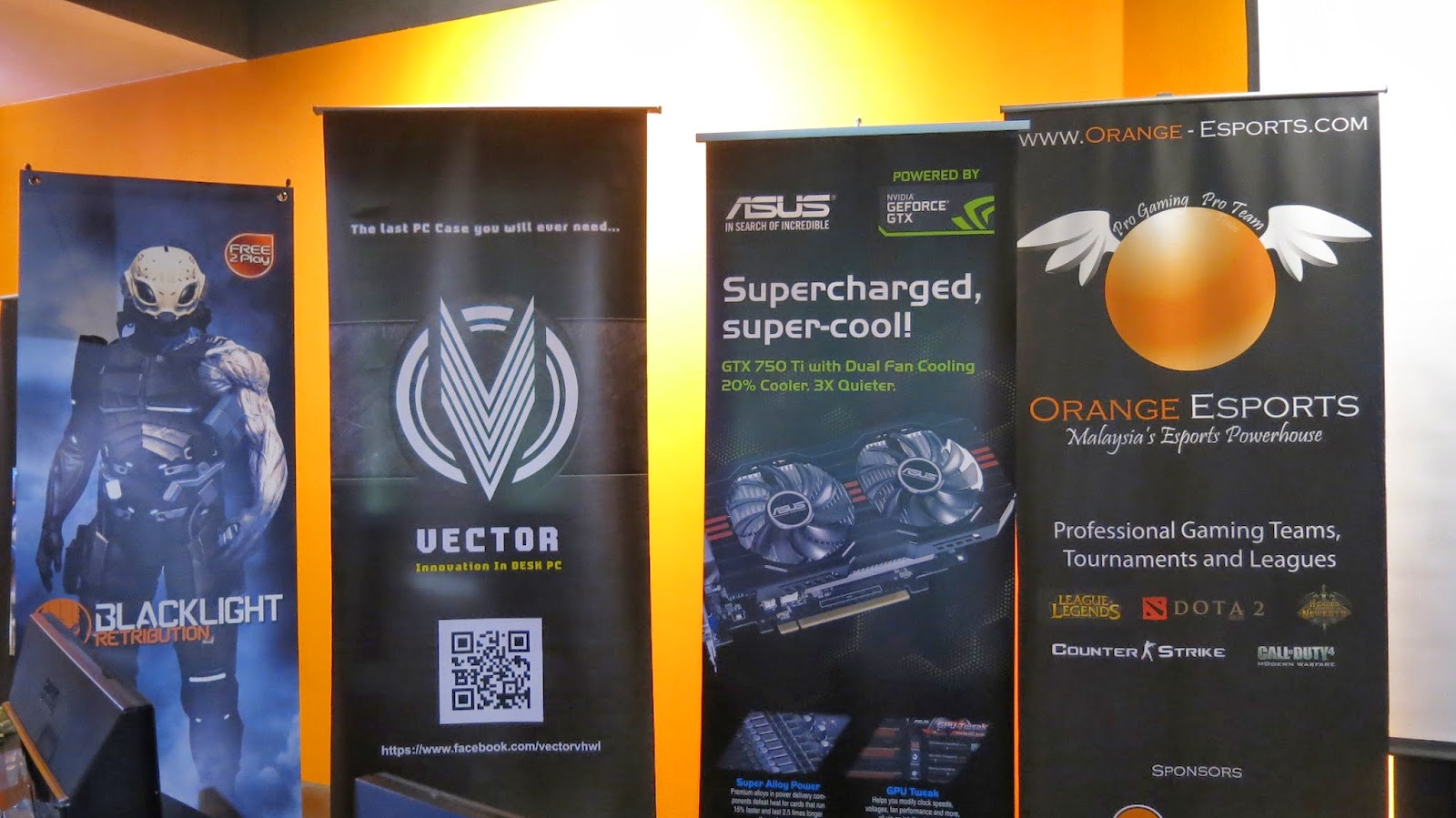 “The main focus of ASUS
& NVIDIA Gamers’ Gathering has always been introducing new technology and
innovations to gamers and tech enthusiasts who embrace DIY PC Gaming as their
primary gaming kick. Therefore in the second installation of ANGG, we are
extremely pleased to have NVIDIA to showcase some of their new products which
have yet to be made available locally. One of products were the NVIDIA G-SYNC
Technology and Steam Machine powered by NVIDIA GeForce Graphics Card,” said Azy
Chua, Country Product Manager at ASUS Malaysia.

Live
Demonstration of NVIDIA G-SYNC Technology awed Participants
The event was kick-started by the live demonstration of NVIDIA
G-SYNC Technology. The demo was carried out using two units of ASUS’ very own
gaming display monitors, the VG248QE. In order to showcase the clear advantage
of the G-SYNC Technology, Hugo Hsu prepared two rigs with one of the display
monitor equipped with the G-SYNC Kit. During his hands-on presentation, he
explained that when V-SYNC was activated, it will cause long latency and
stutter. On the other hand when V-SYNC was switched off it will cause
‘tearing.’ To overcome the latency, stutter and tearing issues, NVIDIA has
specially developed the G-SYNC Technology which continually synchronizes
display refresh rates with the GPU, thus eliminating tearing issues and
minimizing display stutter and input lag. Although the NVIDIA G-SYNC Technology
has been announced some time ago, it is a technology best presented live since
the synchronization between the GPU and the display monitor would be difficult
to be captured through pictures and videos.

Showcasing of
the ROG Poseidon GTX 780 Platinum in Air Cooling and Hybrid Cooling Technology
Sharing the same vision and passion in promoting high
performance DIY PC, ASUS Malaysia was glad to once again collaborate with
Vector the Desk PC provider and A.P.E.S for supporting the water cooling parts.
The ROG Poseidon GTX 780 Platinum was presented in a unique way where two rigs
were installed in a single Desk PC with each rig equipped with the mentioned
graphics card in Air Cooling and Hybrid Cooling mode respectively. In such an
arrangement, participants were able to witness the direct comparison between
the Air Cooling and Hybrid cooling in the exact same environment. The Hybrid
Cooling achieved 31 degree cooler temperature in full load compared to the Air
Cooling. Although NVIDIA G-SYNC Technology remained the highlight of the exclusive
event, the ROG Poseidon GTX 780 Platinum presentation certainly made the most
eye-catching appearance of the day.

Steam Machine
excites Avid Gamers
Ever since Valve announced its Steam Machine project at the end
of 2013, it has created a wave of excited anticipation by both Tech Enthusiasts
and Gamers. Its near negligible hardware limitation and the FREE SteamOS has
made the news more than well received. A total of 300 high-range Steam Machine
equipped with NVIDIA GeForce GTX 780 was first rolled-out to select
beta-testers. In the ASUS & NVIDIA Gamers’ Gathering, Hugo Hsu presented
his very own DIY Steam Machine powered by NVIDIA GeForce GTX 660 Ti which was
specially flown in from Taiwan. In a hands-on demonstration, Hugo Hsu showed
the participants the difference between SteamOS and Steam on PC though the game
Metro: Last Light. On the other hand, ASUS Malaysia also collaborated with
local dealer, C-Zone Sdn Bhd to assemble a ROG Steam Machine. The machine was
equipped with ROG MARS 760 Dual GPU graphics card and MAXIMUS VI Impact
motherboard.

Premier
Test-Play of the Long Anticipated Game, Blacklight Retribution
Blacklight Retribution, developed by Zombie Inc is a free to play
sci-fi first person shooter (FPS) game based on an apocalypse warzone. Boasting
of intense graphics and combining it with smooth yet tactical gunplay,
Blacklight Retribution is a serious contender in the FPS game genre. Thanks to
IAHGames the game publisher, participants were given the opportunity to play
firsthand the Blacklight Retribution game which has been scheduled to be
available in Malaysia around April 2014. Blacklight Retribution was also used
as the main game to test GeForce ShadowPlay technology as well. Participants
were particularly pleased with the GeForce ShadowPlay feature and would
consider using it as their primary gaming recording tool in the future. In a
presentation by Chooi Yi Hui of IAHGames, certain unique features of Blacklight
Retribution piqued the interest of the participants. The Hardsuit feature is a
mechanized suit equipped with weapons of mass destruction and thick defense.
The game also allows weapon customization in regards to muzzles, receivers,
clips and scopes. To eliminate hack issues, Blacklight Retribution incorporates
the Hyper Reality Visor (HRV) feature which allows gamer to see targets through
obstacles.
“We are delighted to be able to share the innovation of ASUS
products and its exciting technology together with partners such as NVIDIA,
IAHGamers, Vector, C-Zone and A.P.E.S who share the same vision and passion for
high performance DIY PC and gaming to local Tech Enthusiasts and Gamers in this
ASUS & NVIDIA Gamers’ Gathering 2014. We are also extremely pleased and
honoured to learn that two participants came all the way from Penang Island to join
us in this gathering held in Kuala Lumpur. This piece of encouraging news will
definitely motivate us to continue organizing more community-based event in the
coming future,” said Jacky Lim, Business Development Director at ASUS Malaysia.

Western Digital Corporation empowers consumers to take control of their digital content with the launch of a suite of consumer...

PAHANG, 4 NOVEMBER – The Dew Challenge, Amateur DoTA 2 Tournament is back for the third year. For the first...