Choosing the right fans for the Corsair H80?

Being unable to wait for the main test rig to be completed before hand, we decided to move on with a rig from our partner at Tech Eden, equipped with our Corsair H80 closed loop liquid cooler to conduct our test for this review.

Now, just for your info that the H80 isn’t our main subject for this review – we’re focusing on the fans today, well not you guys of course. 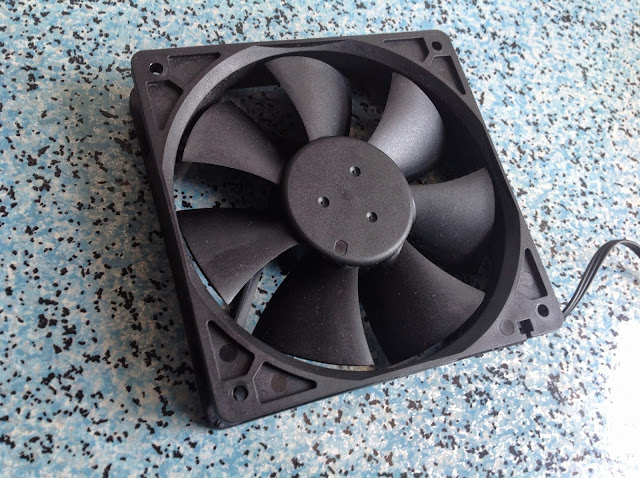 Here’s our first subject, the H80 stock fans. Other than having sharp edges on the impellers which I almost lost a finger cut myself, it seems to be a pretty much capable fan: rated up to 96 CFM, having maximum operating speed up to 2600 RPM, static pressure of 1.6 to 7.7mm/H2O. Seems good? We’ll just have to find out after the test. 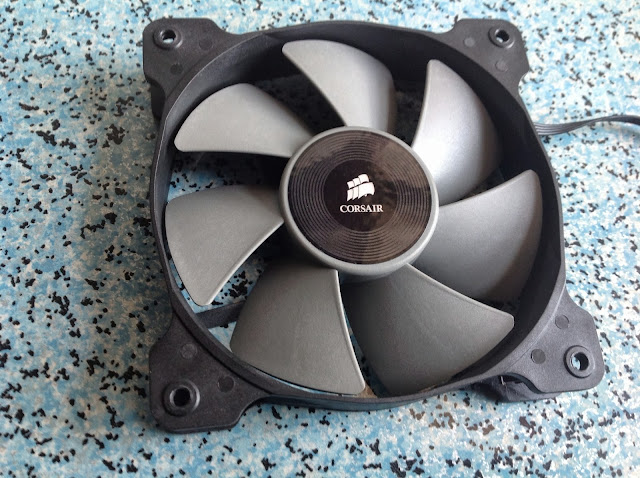 Up next is the H80i stock fans aka the Corsair SP120L fans, which I’ve snatched from another garage sales – 10 Malaysian Ringgit each.

Unlike its brother, the stock H80 fans, I’ve noticed some improvement (?) on the overall design – as you can see in the pic, no more sharp edges on the impellers, better color scheme although it’s not really everyone’s cup of tea and a much more aesthetic frame. This little guy here has a rated air flow of 74.42 CFM,  having maximum operating speed up to 2700 RPM and we’re expecting for a static pressure of 1.29 to 3.1mm/H2O just like the commercially available SP120. 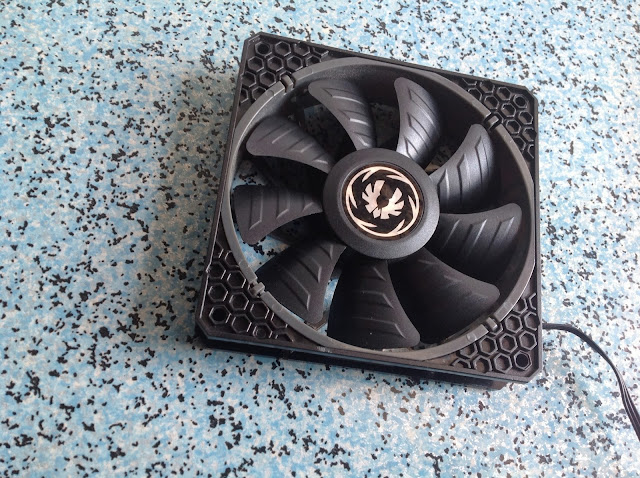 And here we have the Bitfenix Spectre Pro 120MM fan, an aesthetically pleasing fan we have here, priced at 49 Malaysian Ringgit each. As stated on Bitfenix’s website, its dual frame construction helps in reducing vibration during operation, special curved design on the fan blades and cage directs airflow in a focused column, minimizing diffusion, etc. Rated with operating speed up to 1200 RPM, air flow of 56.22 CFM, static pressure of 1.24mm/H2O. 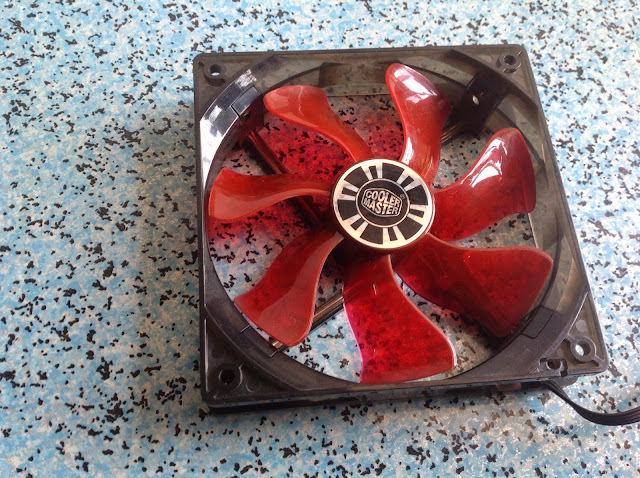 Here’s our red devil, the Cooler Master XtraFlo 120MM Red LED fan, another aesthetically pleasing subject joining our test. Having a rated operating speed up to 2200 RPM, air flow of 93.74 CFM and static pressure of 0.43 to 3.3mm/H2O gives it an additional point other than just good looking, 1 point to to Gryffindor Cooler Master. 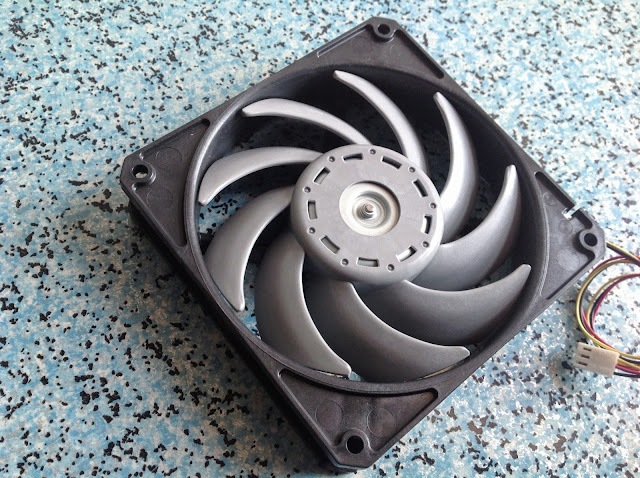 Last but not least, our king of radiator fan – the Scythe Gentle Typhoon AP-15 1850 RPM version. Many have heard and experienced the awesomeness of his majesty (LOL), with a rated operating speed up to 1850 RPM, air flow of 58.3 CFM and static pressure of 1.65mm/H2O. For those of you who hasn’t been able to try it out and been wondering if it’s worth to go for, you’ll find out soon enough.

The corsair H80 comes with adjustable speed in 3 mode:

Basically, I’d call them min, mid and max for the ease of data recording during the test. just not to left out an important key detail: ambient temperature is 33°C during the test. 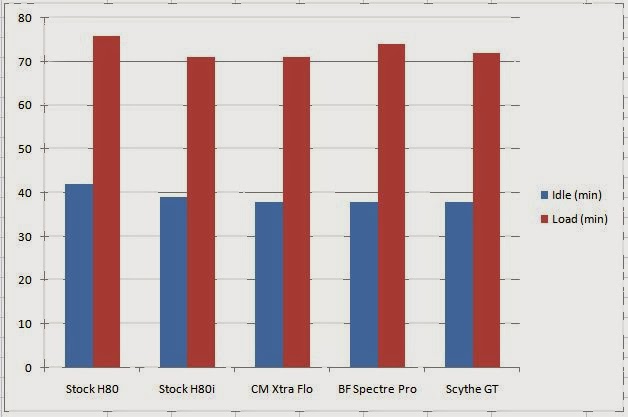 First up is the test done in Quiet mode and it seems that the Cooler Master XtraFlo did the best with 38°C while idle and 71°C while on load. It’s not a clear win as the others are just few °C behind, especially the Stock H80i fan SP120L with 39°C on idle and 71°C on load. H80 Stock fan seems to be the worst in this scenario.As for our king the Gentle Typhoon AP-15, it doesn’t seems to be as superior as what others have said it would as it gives a temperature of 38°C on idle and 72°C on load. 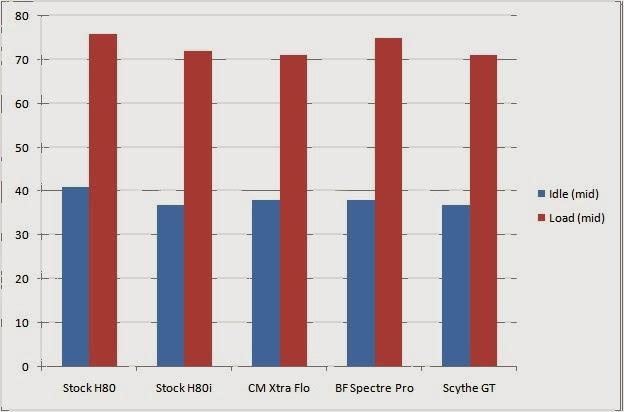 Up next, the test is done with the Balanced mode and we can see that Cooler Master XtraFlo is still maintaining it’s temperature while the Gentle Typhoon AP-15 and H80i Stock fan SP120L is now doing slightly better than Quiet mode with idle temperature 37°C and load temperature 71°C. Bitfenix Spectre Pro on the other hand, is doing not quite well, with higher load temperature 75°C compared to what it did in the Quiet Mode, 74°C. 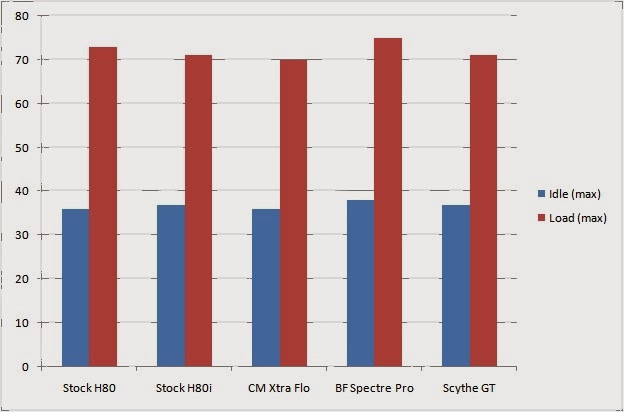 And now for the grand finale, performance mode kicks in. Cooler Master XtraFlo is seems to be our clear winner here, giving the lowest idle temperature of 36°C and load temperature of 70°C among other competitors. Bitfenix seems to be the worst where the stock fan did much better than it. By looking at it we can see that the stock fans provided by Corsair is what we should be sticking with instead of these after market fans like Gentle Typhoon AP-15, Bitfenix Spectre Pro, Cooler Master XtraFlo, etc?

Let us not getting to the conclusion yet! Before I sum up everything from the test result, let us have a look at the final details collected during the test, fan noise. Just to let you guys know that the numbers here are given based on human ears as do not have any high end equipment to test the noise in db for the moment. 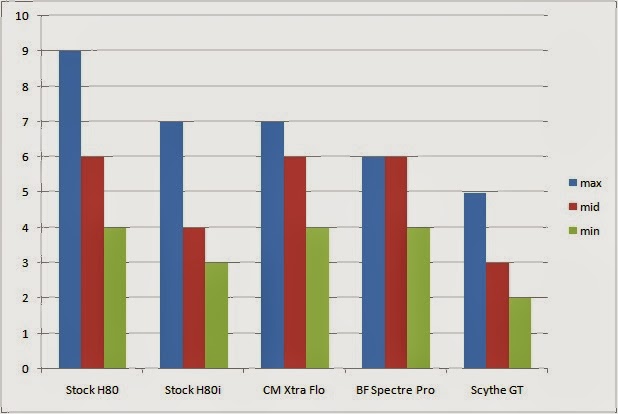 By giving it a scale from 1 to 10, here’s what we’ve rated for these fans involved during the test.
The stock H80 fans seems to be the noisiest kid around, having a scale of 9 during max load and running at 2600 RPM. Our current leading subject, seems to be a bit noisy on load, having a scale of 7 and running at 2200 RPM. Surprisingly,the stock H80i fan SP120L seems to be an average performer, with a scale of 7 on max load and running at 2700 RPM. Our worst performer (1200 RPM) turns out to be pretty outstanding when it comes to low noise, where the king (1850 RPM) is a clear winner in low noise during operation.

The table has turned as soon as the noise details is revealed. The Bitfenix Spectro Pro is able perform slightly near to the stock H80 running 2600 RPM as it only runs on 1200 RPM during full load. Being the best low noise fan in this test, the Gentle Typhoon AP-15 running on 1850 RPM beat crap out of the H80i stock fan SP120L which runs on 2700 RPM despite of having the near same result in cooling.

So does this means that the king wins and fans always root for the underdog? Not quite. In the end it all depends on the user himself/herself whether it is worth to spend more for a good low noise fan with high static pressure / CFM or just stick to the noisier stock fans. If you can sacrifice can cope with the noise produced by the stock fans, it’s no harm to stick with it as the stock fans is doing pretty well in Quiet mode, especially the H80i stock fan SP120L, rather than spending extra for a good and nice low noise fan as these fans aren’t cheap (may cost you extra 30 to 120 Malaysian Ringgit, depends on what fans you will be getting, what you pay is what you get).