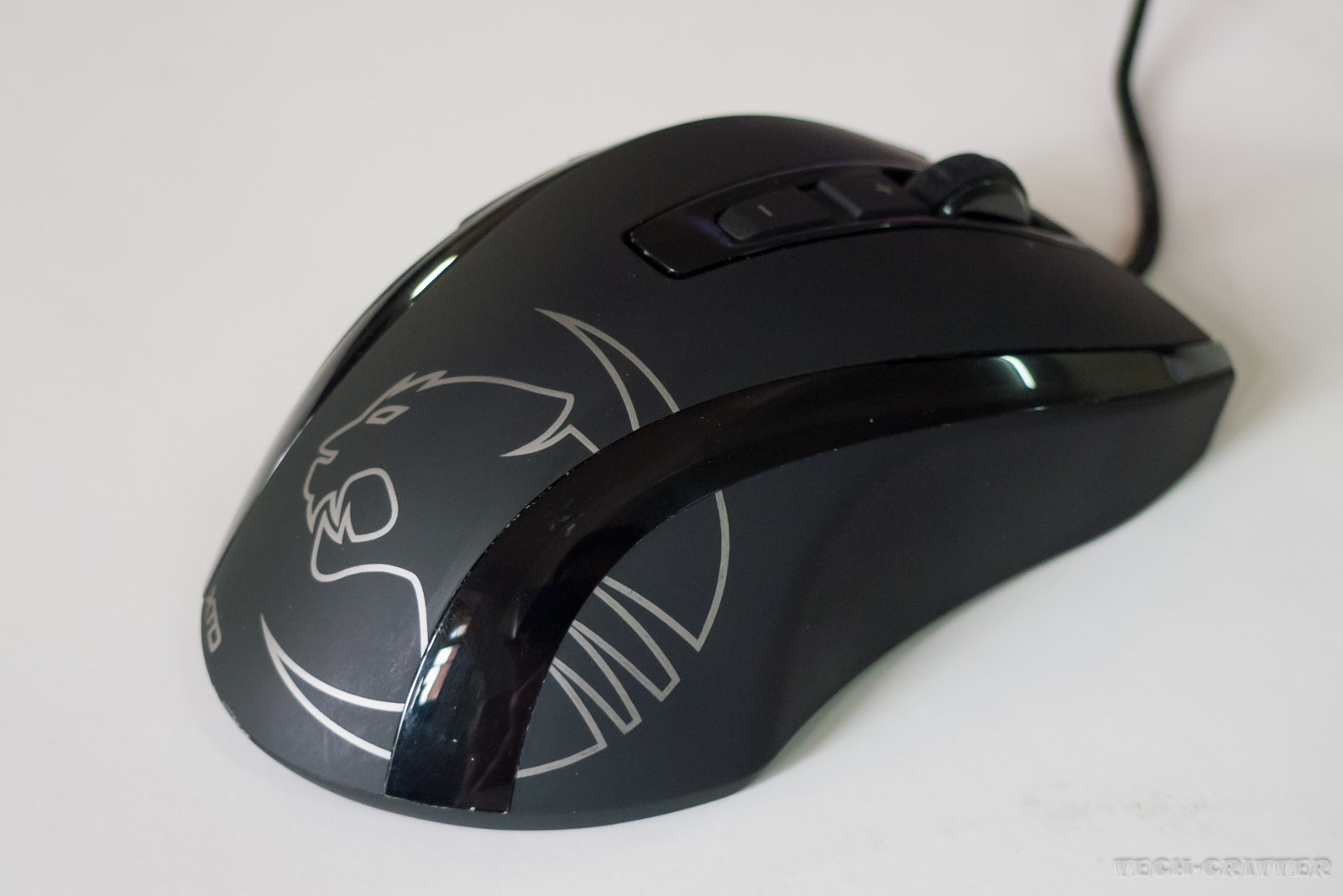 Few weeks back, we reviewed the ROCCAT Kone Pure mouse which we concluded it being a real performer mouse and thus earning a gold rating from us. The creative integration between the software and the hardware has showed us how they could change the whole user experience, especially the ROCCAT Power-Grid app.

Today we have Kone Pure’s higher end brother, namely Kone XTD. In case you’re wondering, the XTD stands for “Extended” and it is direct upgrade to the Kone[+]. As ROCCAT claims the XTD to be a “Maximum Customization gaming mouse”, read on for our quick review on this mouse and see if it live up to its name.

The mouse comes in a bubble wrap instead of standard packaging, we’ll skip the packaging and review only the mouse itself.

ROCCAT logo at the body of the mouse. Unlike Kone Pure, the logo is not illuminated as the lighting feature is applied to the transparent stripes at both sides of the mouse. 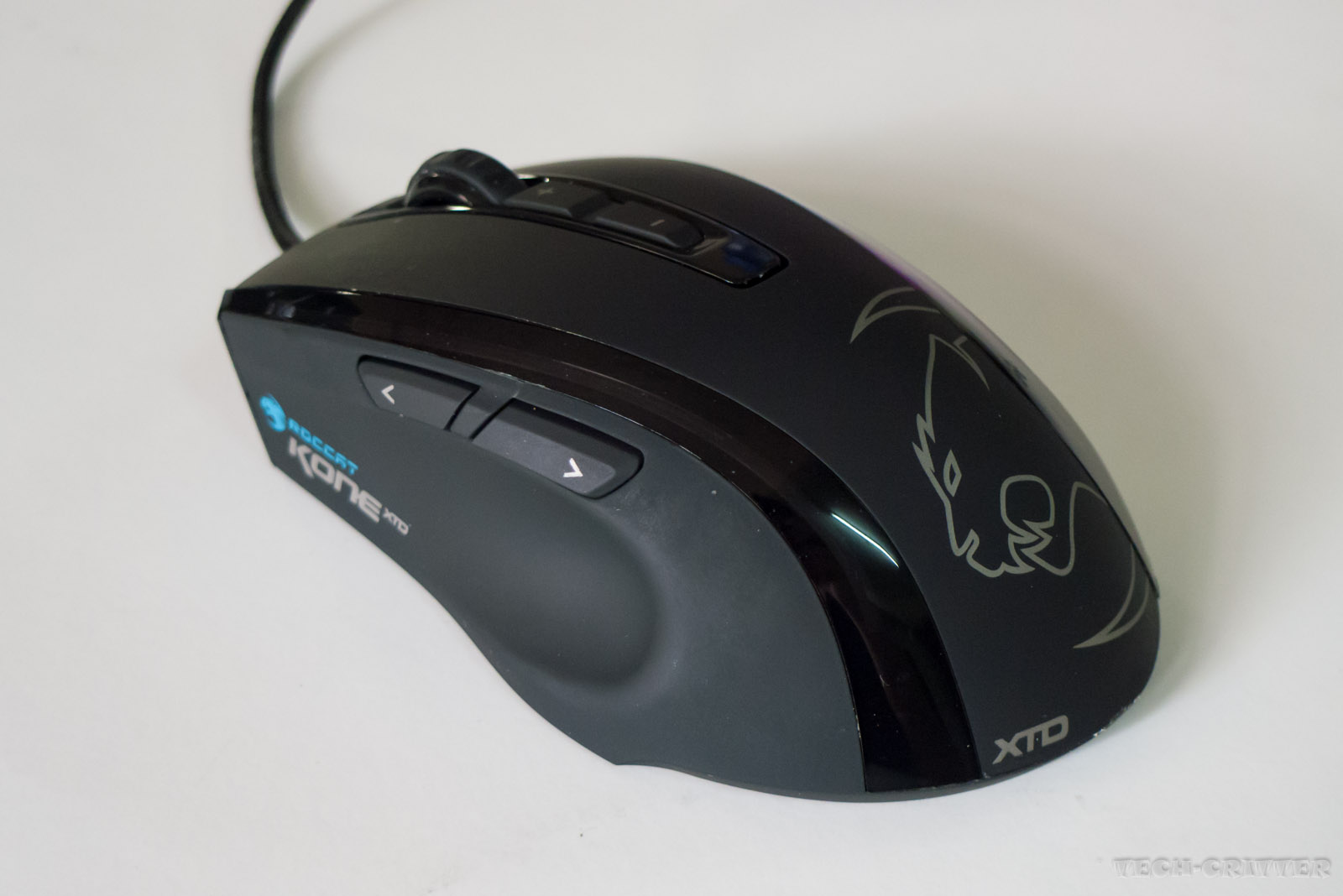 The mouse is ergonomically designed for right handed users. 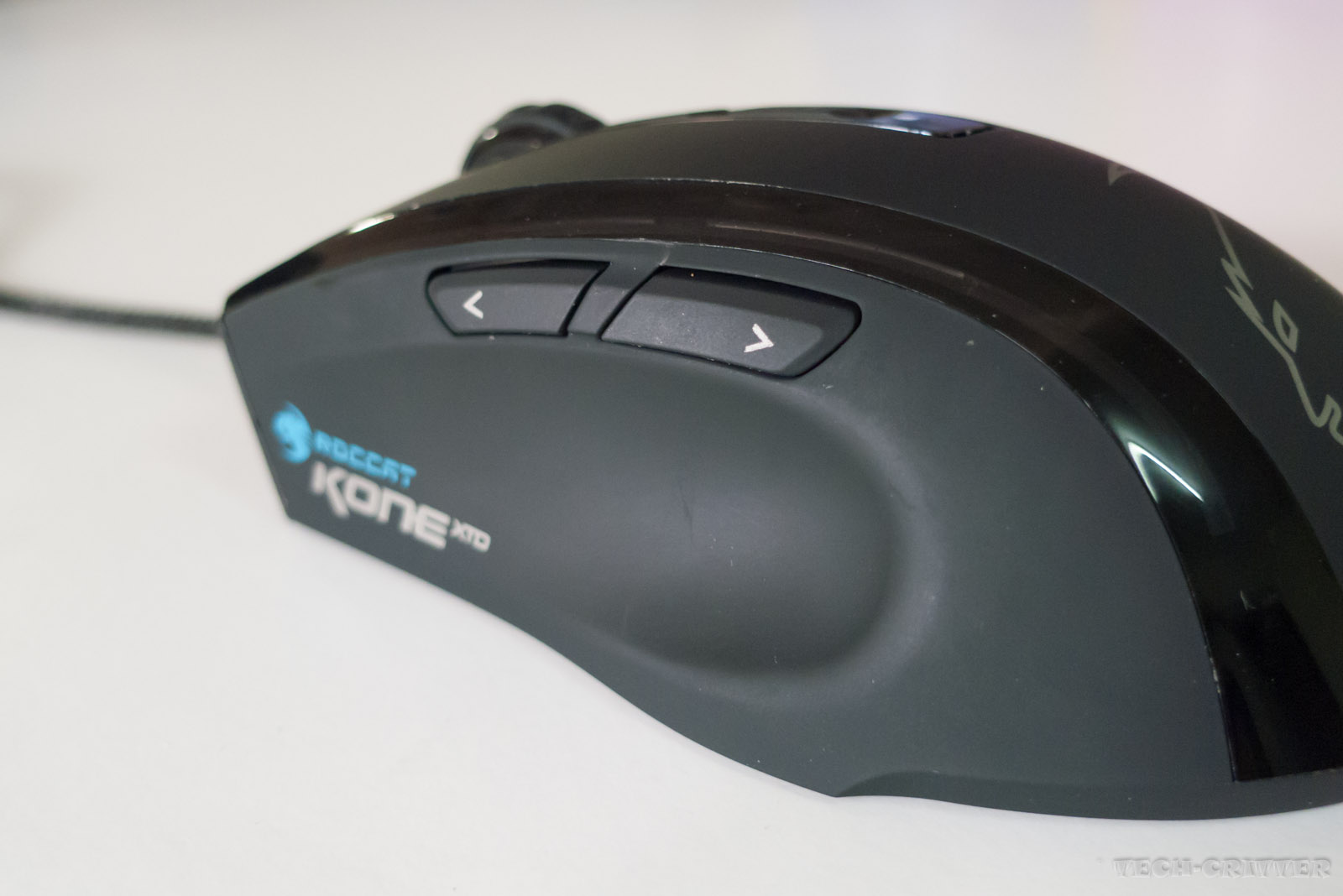 Contoured side for your thumb. There are two buttons at the side, though they are labelled as forward and backward, you can customise all the button’s actions via the driver software.

I do appreciate the functionality of the Easy-Shift[+] button, however, I think ROCCAT could have added a dedicated button for it so that we don’t have to sacrifice the back button. 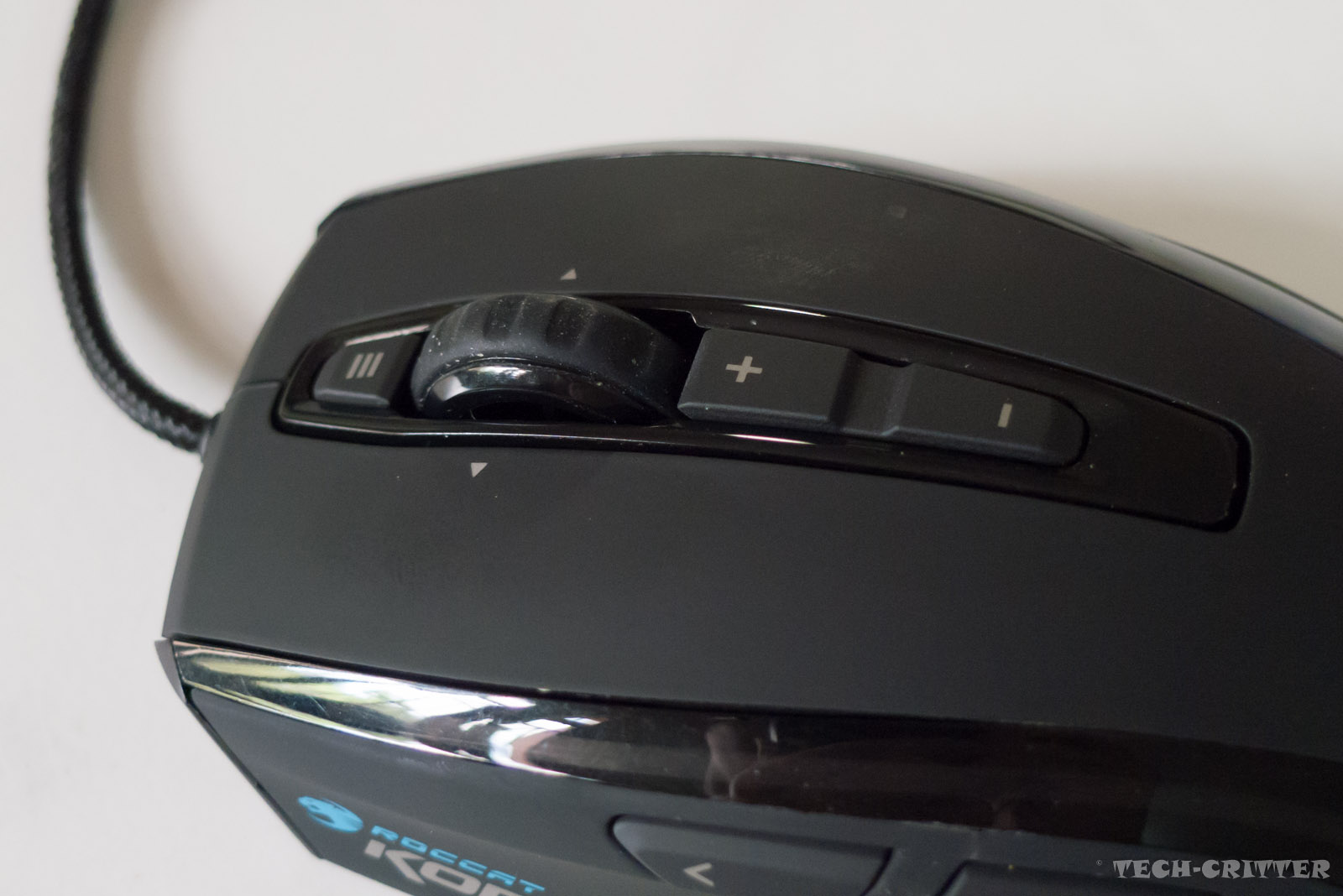 There are a total of 7 mouse buttons along with the scroll wheel (Titan Wheel). Speaking of the Titan Wheel, ROCCAT advertised it to be higher quality than any other scroll wheels and extra durable. Though I can’t comment on the durability of it but I am impressed with the wheel.

Each scroll is precise and you get that specific feedback for each action. Even impressive would be the wheel’s tilt action which I find it to be one of the best. There are loads of mice out there offering tilt action for the scroll wheel but none of them could have provided such subtle and responsive feedback as the Titan Wheel.

Meanwhile the switches under the buttons are using Omron micro switches. The clicks are precise and especially the feedback is consistent, but not all of the buttons are equally good. Take a look at the additional button at the top of the Titan Wheel. It find it useless especially when it stays at that position. I would have been glad if ROCCAT would move that button to the thumb rest area and use it as Easy-Shift[+] button.

Speaking of the differences between the XTD and the Pure, they would be the Titan Wheel and the additional button at the top it. 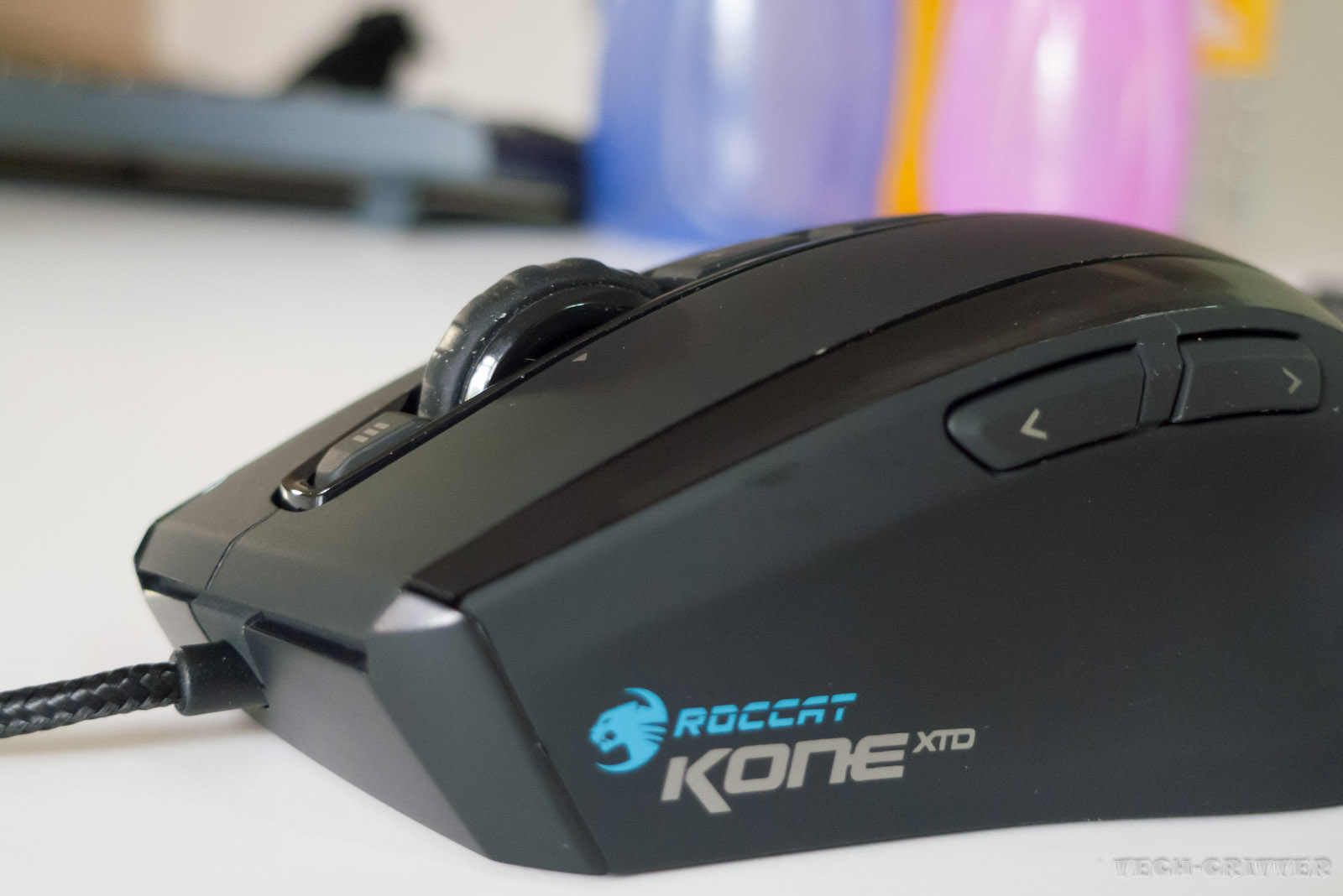 Titan wheel is slightly taller than the Pure’s scroll wheel. 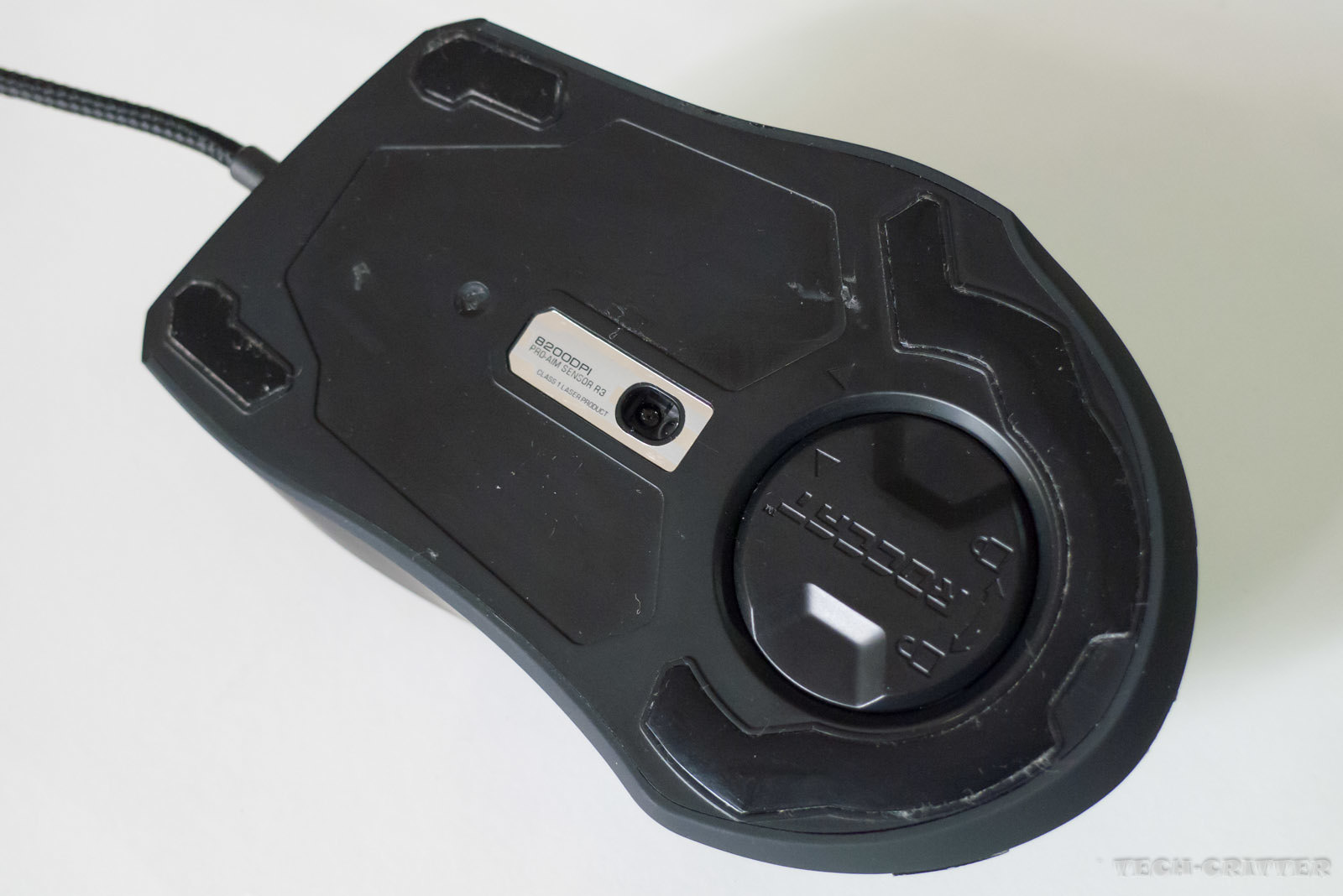 Bottom of the mouse. Pardon the absence of the label.

Two smaller glide feet at the top while a larger piece at the bottom.

The round cover houses the mouse’s weight management kit. Perhaps that’s the reason why the bottom has a larger glide feet than the top. 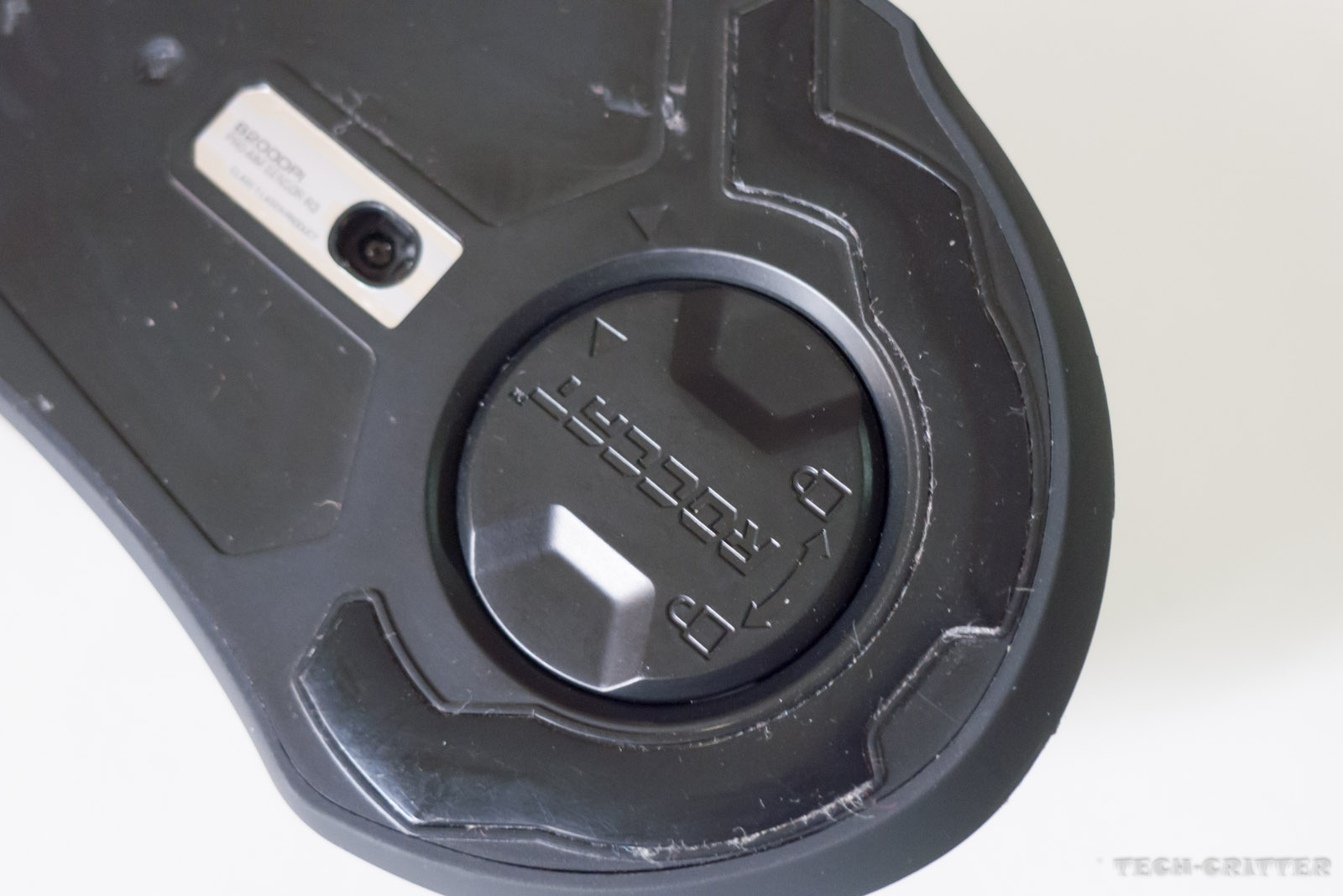 As you can see, the cap is secured to its place with a simple twist lock mechanism. 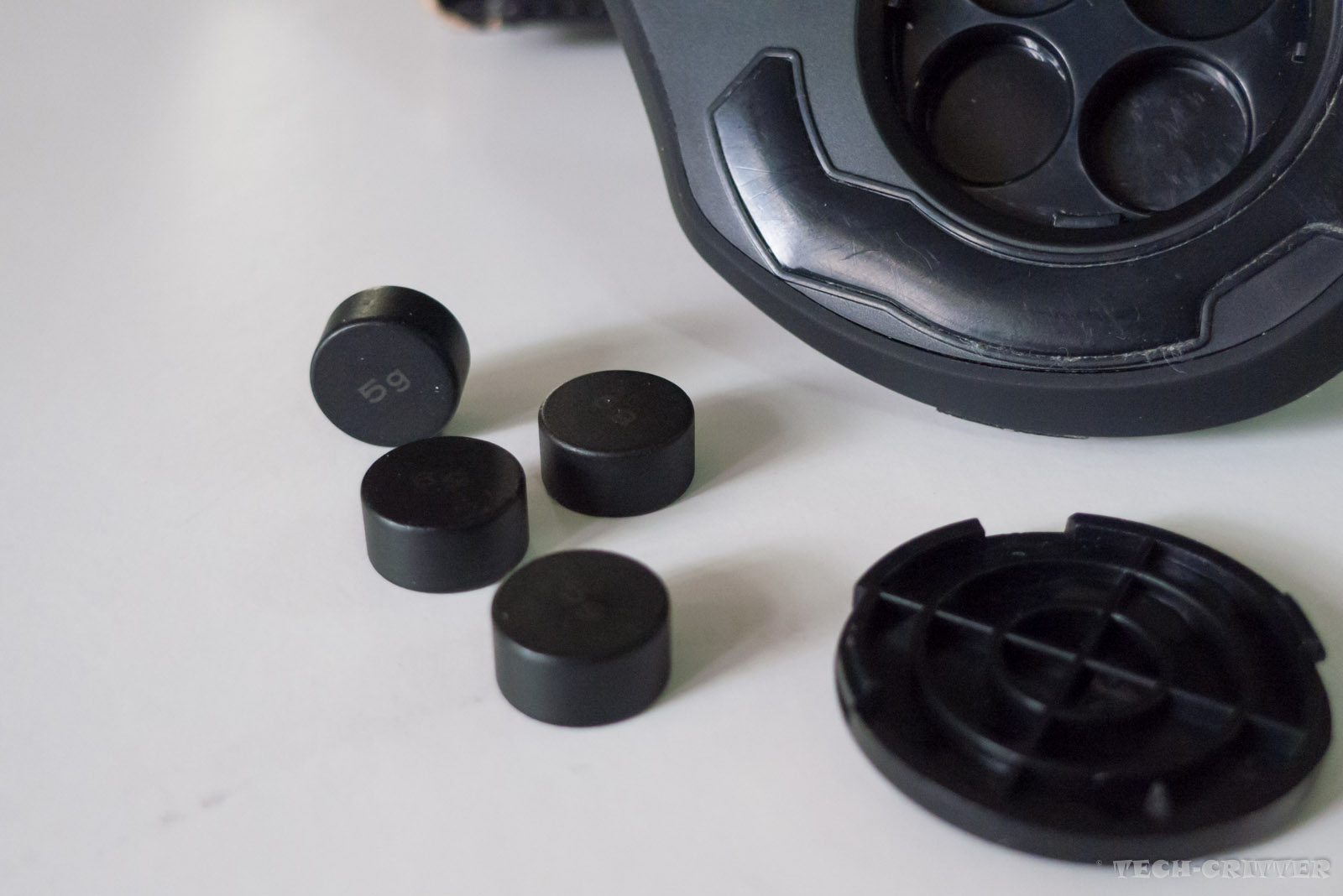 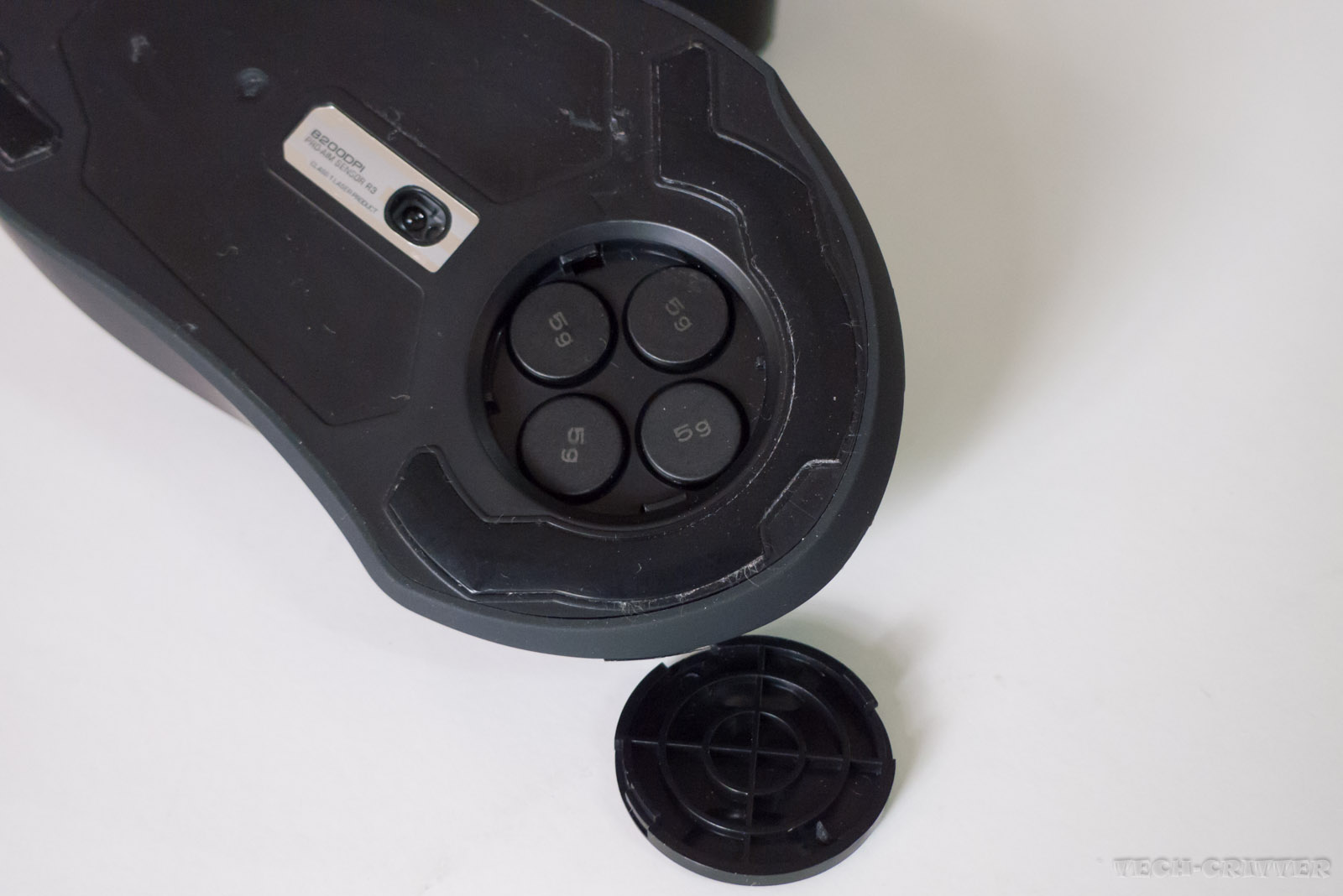 Placing all the weight buttons into the slots. Then here comes the problem, I find the buttons are extremely difficult to be removed from the slots. I am aware that most of the time one would just customise the weight for the first time and then leave them throughout the rest of the mouse’s lifespan, but the mouse does not come cheap and for sure we would expect the designers to take the product’s user-friendliness a little more serious. 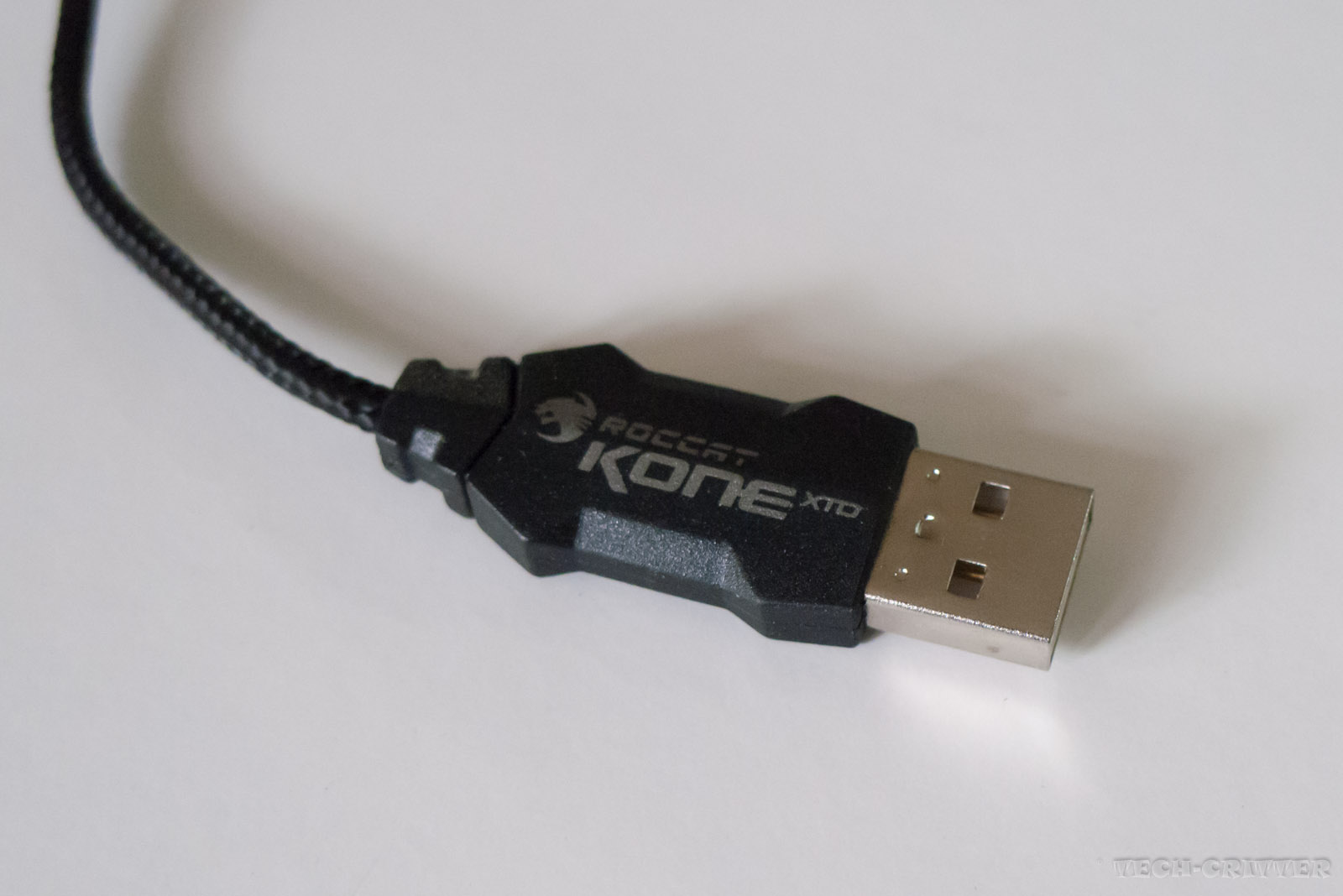 Standard USB jack. Though it is not gold plated, but we all know that doesn’t matter. 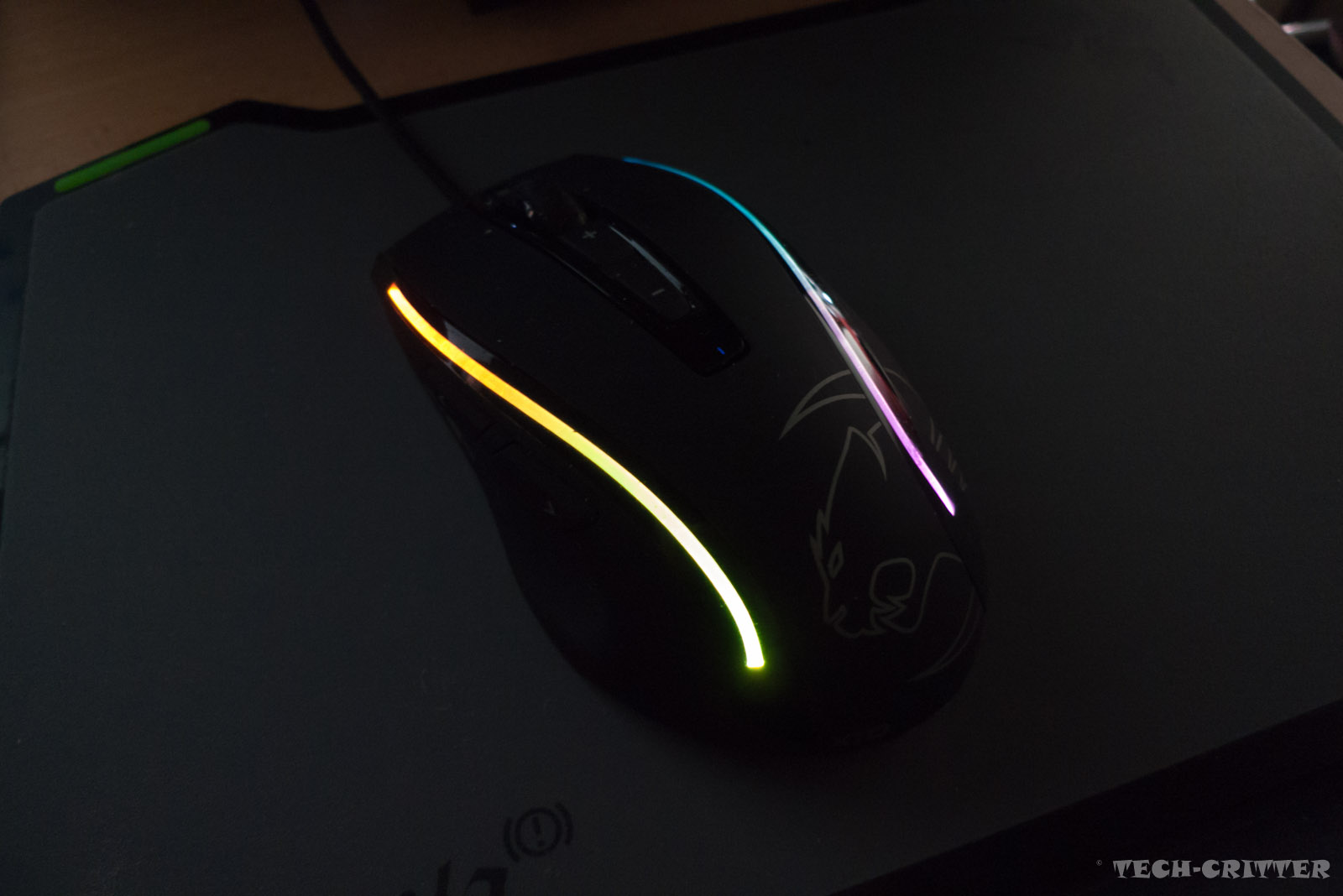 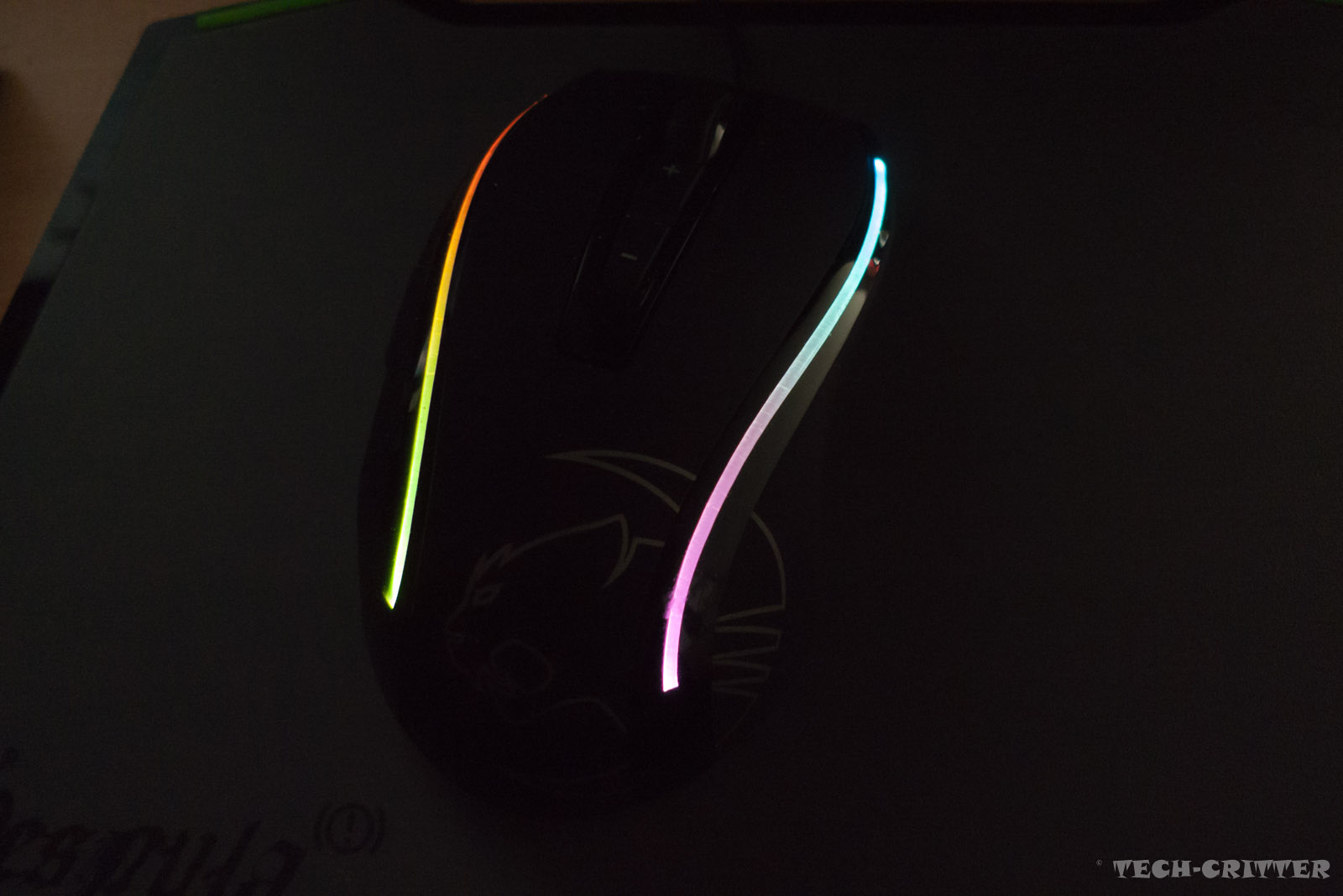 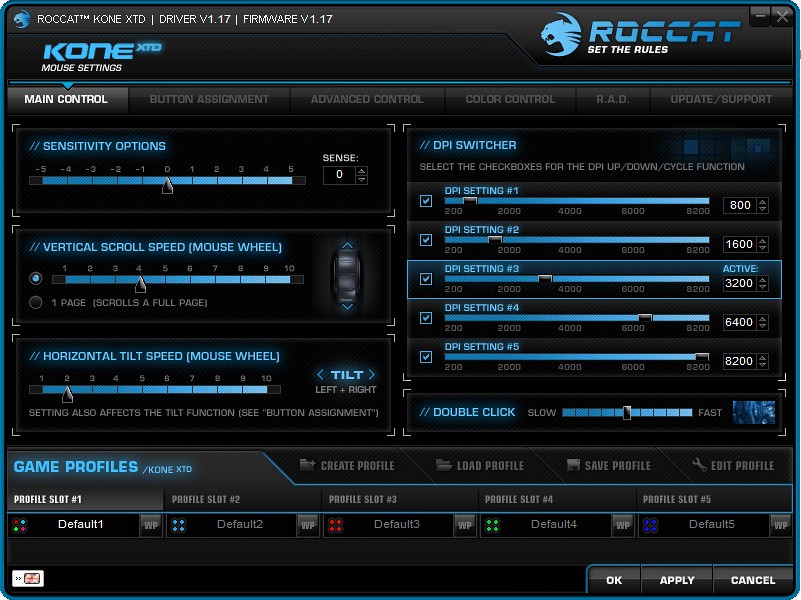 Main control for general configurations such as the sensitivity, clicks and scroll action. 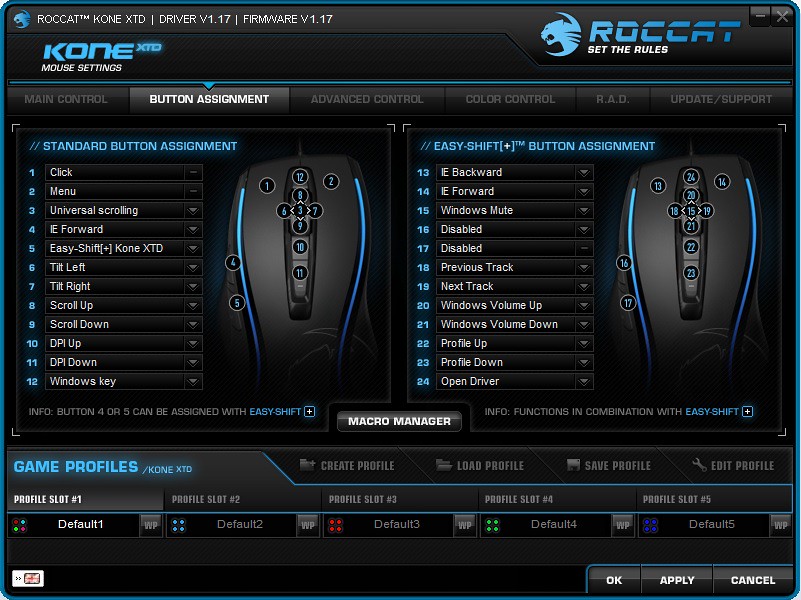 Meanwhile you can manage the macro and assign different functionalities to the mouse buttons. 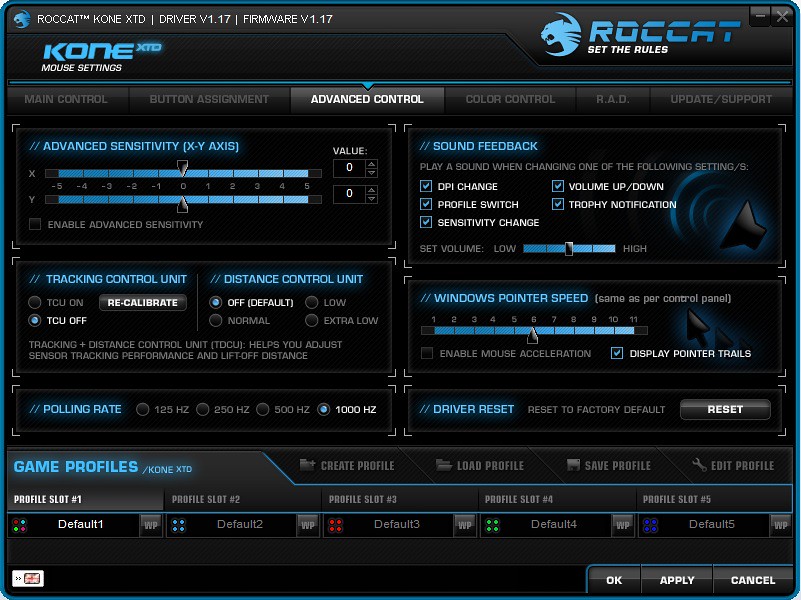 Advanced configurations for your mouse which incldes the polling rate, X-Y axis sensitivity and the sound options. 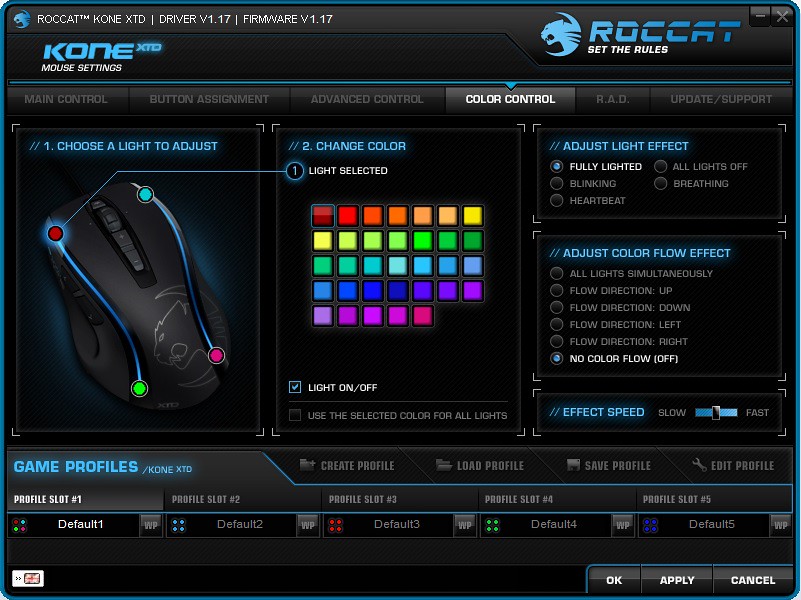 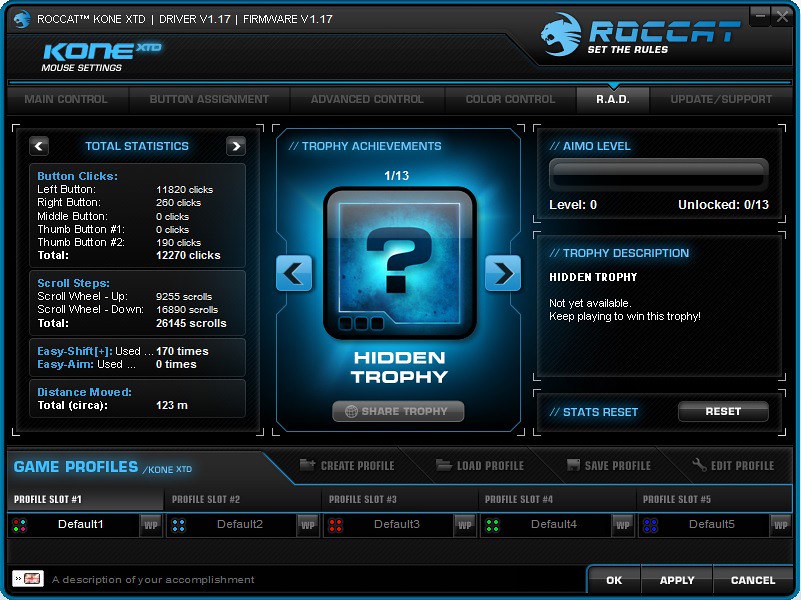 Then ROCCAT even has your mouse usage statistics and award. 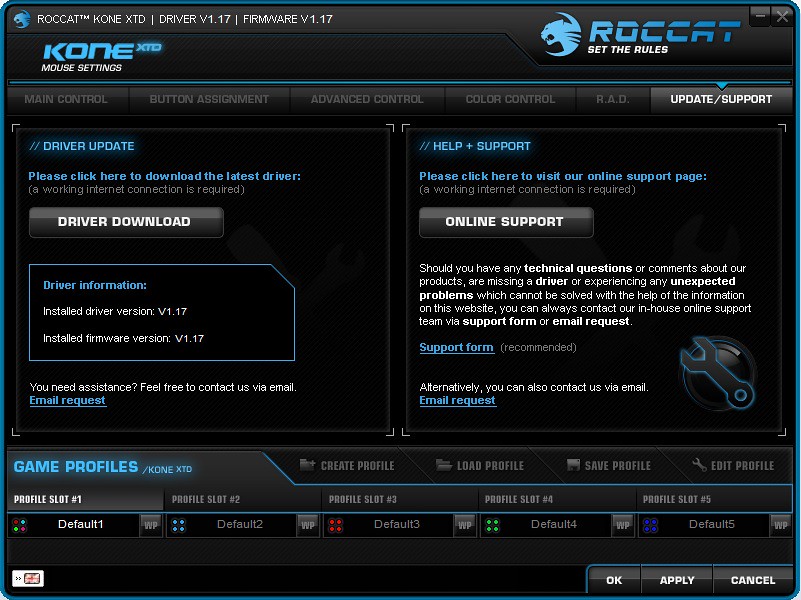 Lastly the update and support panel. 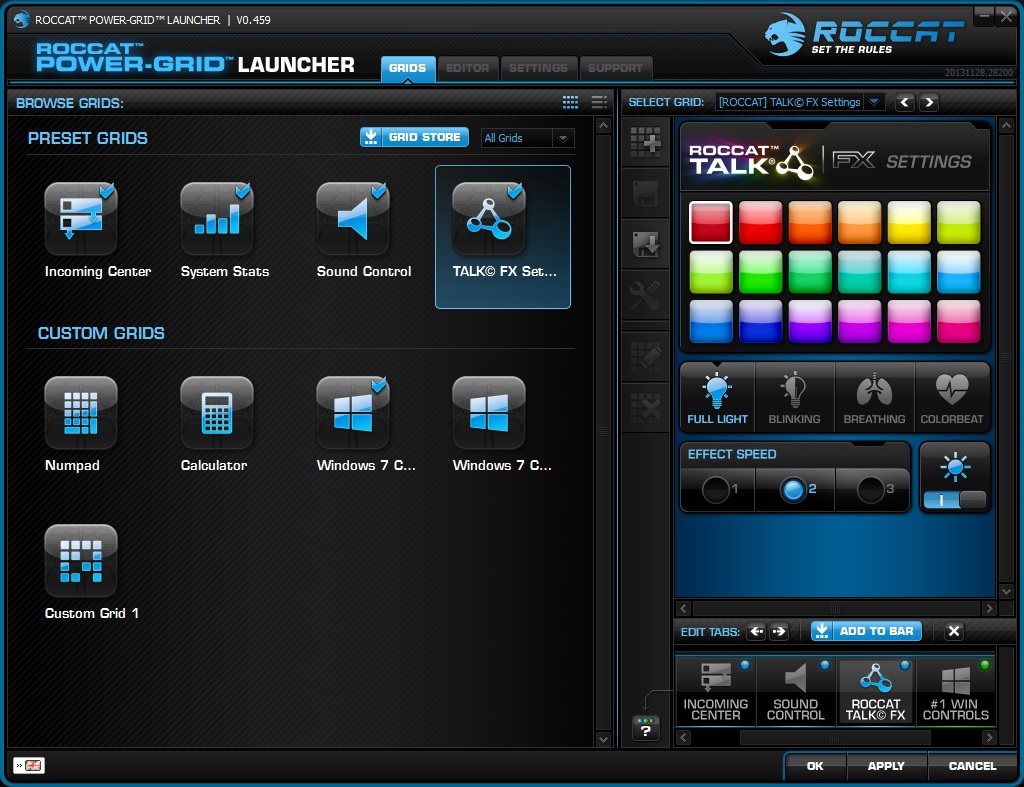 Not to forget the Power-Grid Android and iOS app which utilise your mobile device as secondary display and control for you system and games.

First you have to install the Power-Grid desktop application and the mobile app. 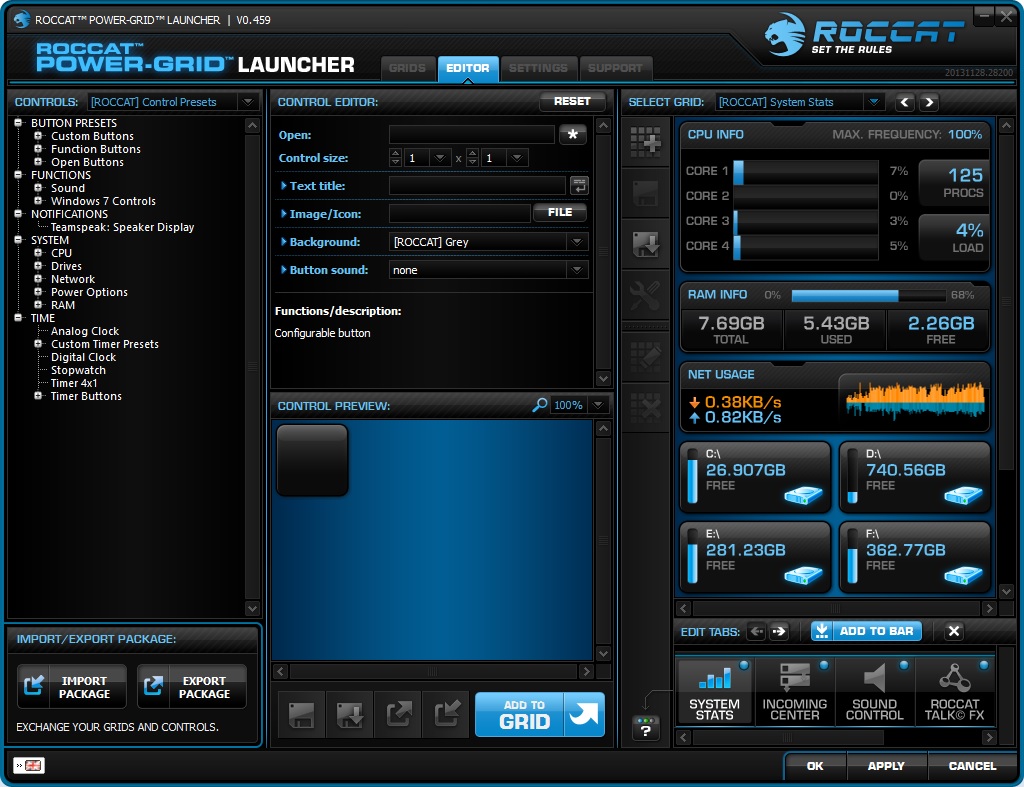 You could edit the grids as you see fit to your needs. 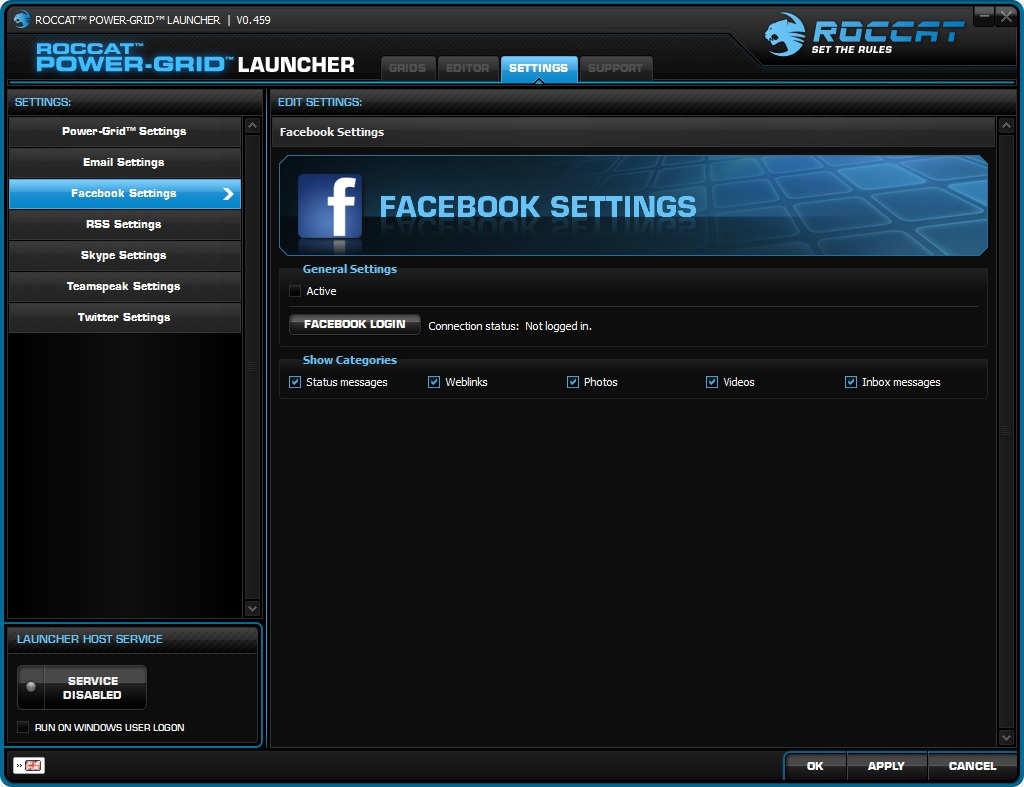 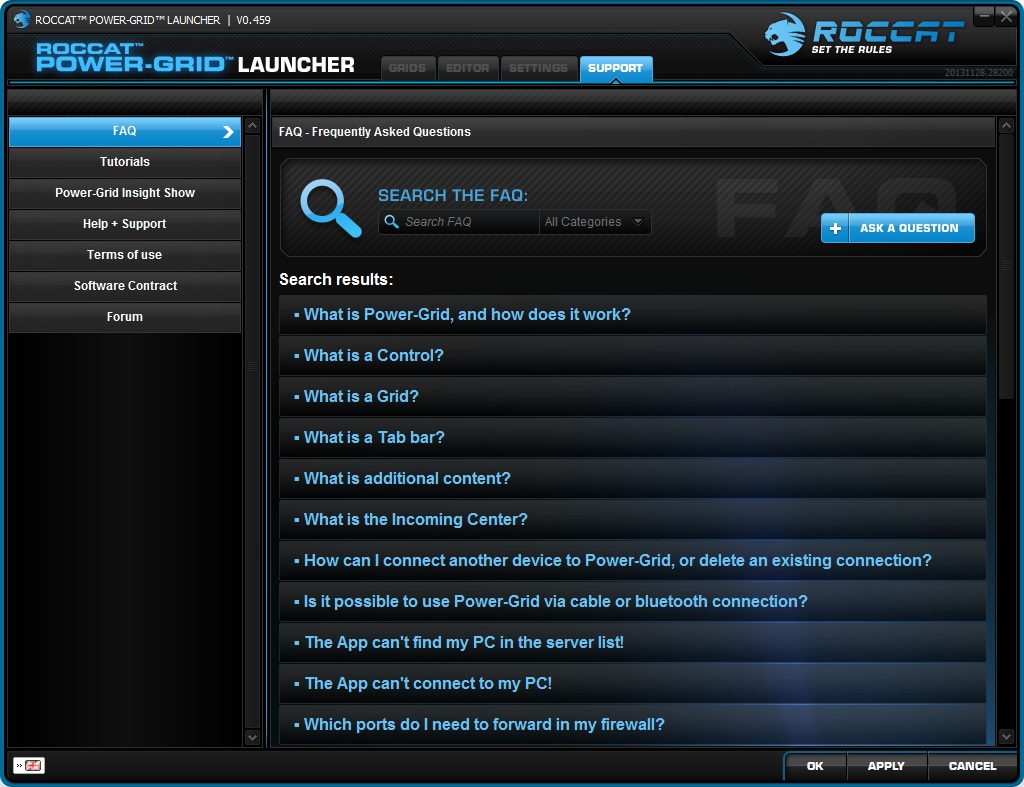 As you can see, setting up the Power-Grid is fairly easy and straight forward, but if you face any trouble there’s a lot of useful information available at the support. 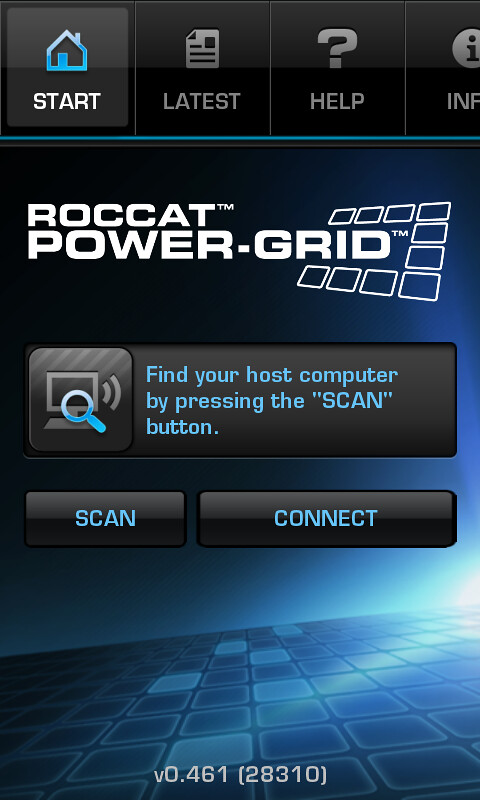 Connecting your mobile device to the desktop app is fairly easy if your network and firewall is properly set. 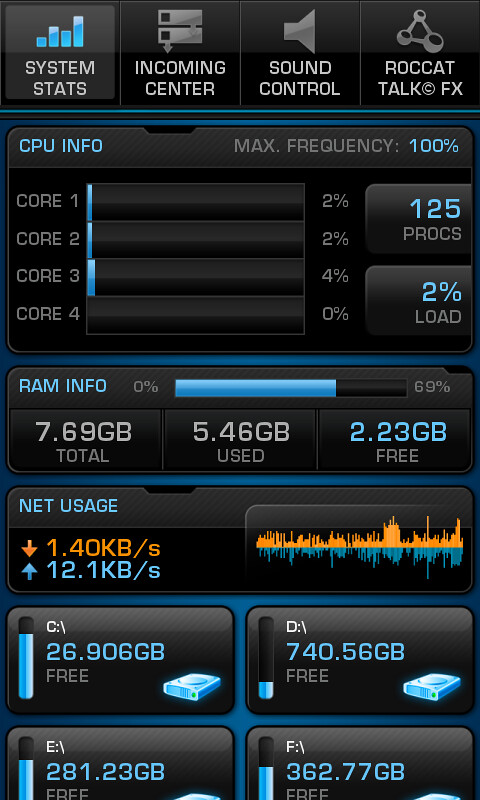 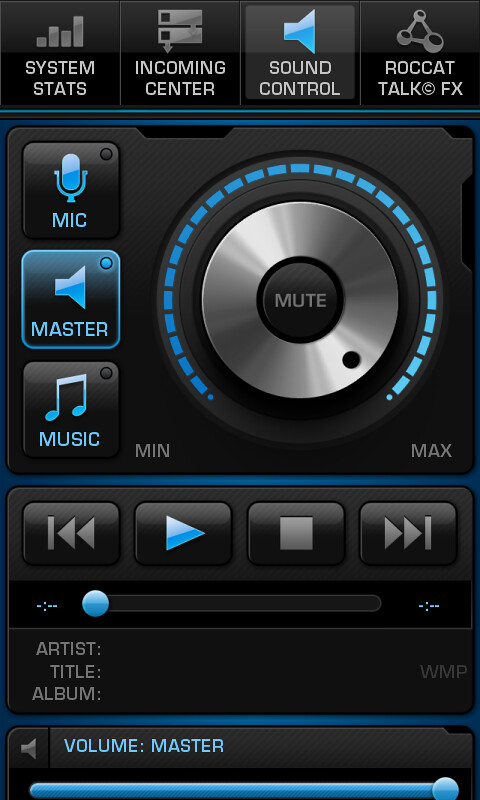 The configured grids would be shown in your mobile.

Looking at the spec-sheet of the XTD and the Pure, you can immediately notice that both of them has exactly similar bits and pieces. They literally shares the same internals except some added features from the external. Even both of them has almost similar build quality and ergonomics when compared, albeit the size and weight of XTD is slightly larger and heavier than the Pure. But one could easily differentiate them when they hold the mouse.

Performance-wise, we were very satisfied with the Pure and we find that the XTD performs on par with it. No doubt it is a real performer mouse, the button clicks are accurate and works really well, worth mentioning is the awesome Titan Wheel.

On the side note, ROCCAT claims the XTD to be “Maximum Customisation Mouse’. To be frank, I find the extra customisation options when compared to the Pure are just the weight management, extra buttons and extra lighting effects. Let’s face it, both of them shares almost identical internal except the scroll wheel and not so important lighting gimmicks.

Does the extra really worth what you’re paying? It could be both yes and no, depends on how you see the extra features. It is not the XTD’s fault for being overshadowed, but the fact that ROCCAT decided to make them so similar and priced the Pure at much competitive price makes the XTD an expensive upgrade. 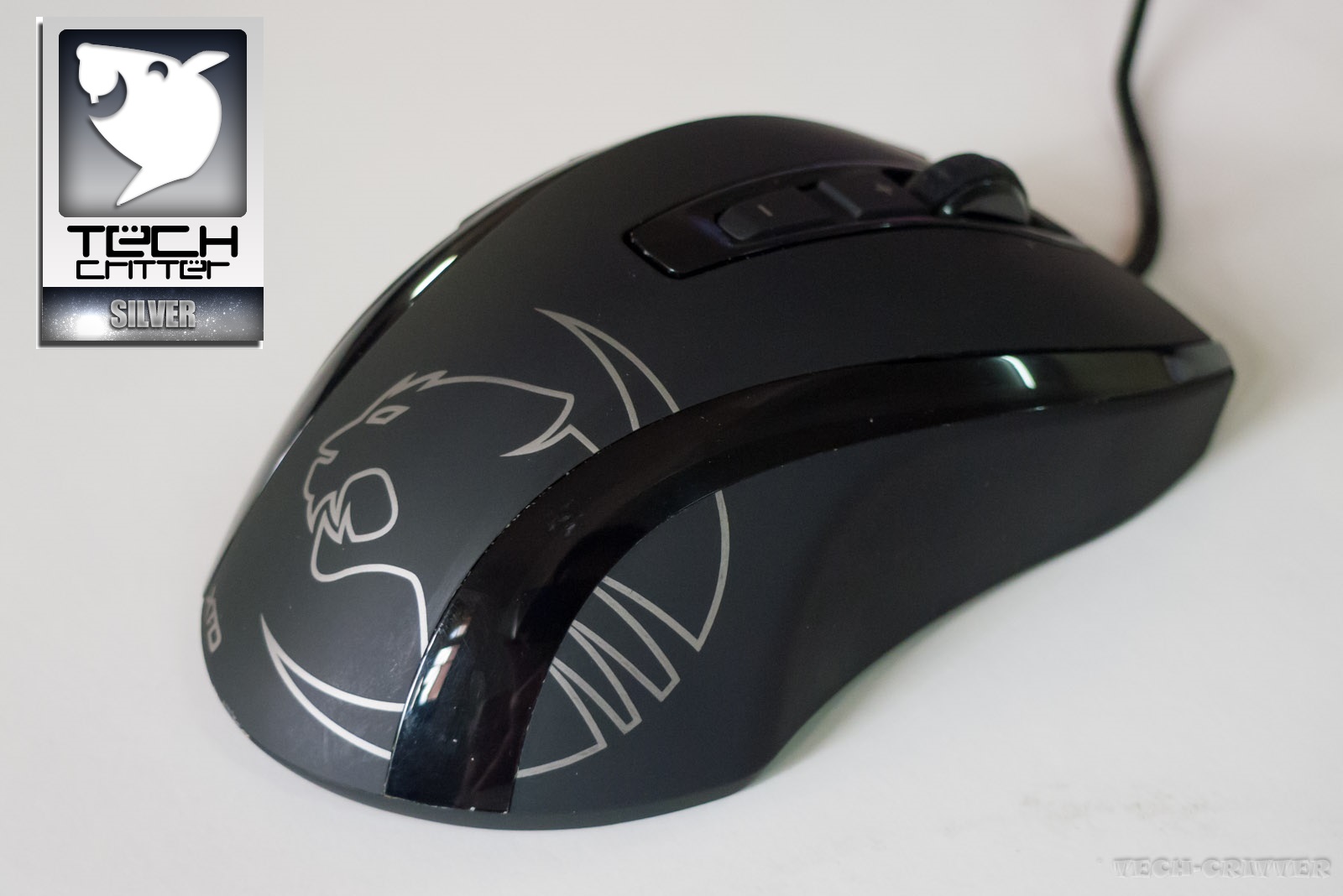