Gaming notebooks can be a great companion for on the go gamers and higher end gaming notebooks like the MSI Gaming GT72 is able to deliver outstanding performance and guaranteed satisfaction for these on the go gamers – the bulkiness of these high end gaming notebooks is the only real issue here – not everyone likes to carry a heavy gaming notebooks around, especially for those who travels a lot.
Today we’ll be examining a gaming notebook from MSI, special thanks to MSI Malaysia in provision of their GS70 2QE Stealth Pro Gaming Notebook. A slimmer and stylish one it is,  let’s find out what kind of performance can it deliver to satisfy our needs for gaming?
(SRP for the MSI Gaming GS70 2QE Stealth Pro is around RM7,299)
Specifications

We can see that MSI has put on a lot of effort on their packaging, a luxurious one we must say – this is not the kind of packaging you’ll normally get from most brand’s gaming notebooks out there.
Accessories

The lid comes with brushed aluminum finish as usual, looks stylish and with an added touch of premium.

Bottom view of the GS70 2QE, there’s 6 large rubber feet and 3 smaller feet to raise the notebook in order to have sufficient space in between the bottom of the notebook and the surface it is placed on.

Self upgrade seems to be impossible as a screw happens to be right under the warranty sticker, any tamper to the sticker will void the warranty immediately.

The Dynaudio subwoofer got you covered with extra bass while you’re gaming, watching movies or listening to music.

At the rear end of both sides of the GS70 2QE is the main heat exhaust.

At the right side you’ll find 2 x USB 3.0 port, a card reader, charging port and a Kensington security slot.

From this angle the GS70 2QE doesn’t looks like any gaming notebooks which we initially expected, as it looks more like a stylish notebook for work.

Opening the lid to 180° is pretty much impossible due to hinge design.

The main body of the GS70 2QE Stealth Pro, we see a full featured keyboard designed by SteelSeries, large area of palm rest

The system audio is powered by Dynaudio, the Danish sound experts that are dedicated to the goal of authentic sound reproduction since they where founded 1977 in Danish Skanderborg.

It might vary by region, this is the label to prove that your MSI gaming notebook is fully covered within the limited warranty period by MSI Malaysia.

Target selection and execution is made easier as the touchpad (or better known as clickpad) comes with integrated mouse button under the touch-sensitive area.

Function keys with different function is labelled with relevant icons as following:

The type of key switches used on the keyboard is the scissor switch which is commonly used on low profile keyboards.

The customizable RGB backlit keyboard which can be toggled between 4 layers (FN + 1/2/3/4) to suit your mood for gaming, entertainment, etc.
Testing Methodology

System Monitor is a pretty useful tool for one to monitor the system performance, shift mode, temperature and network speed. All the details is presented in the simplest form which can be easily understandable.

The Utility allows you to compile all frequent used applications into the list for the ease of access.

The instant play tab allows you to add your most frequent played games to the list and launch it via the P1 function key located at the F4 key.

Display & audio tab allows you to adjust the volume for speakers/microphone and display brightness/gamma.

The mouse tab, allows you to control the mouse pointer speed, double click speed and scrolling line number easily without having to access the mouse properties in Control Panel.

The resource release tab lists out all the active programs and you can select the programs to be killed to release resources for the designated games when instant play is activated.

Device Setting allows you to toggle for enable/disable of Windows key on the keyboard, enabling/disabling the high performance profile and toggle the system performance with the shift mode’s green (low power consumption), comfort (balanced) and sport mode (high performance mode).

With this feature you can customize the buttons with macros according to your liking and needs.

You can customize the effect, lighting and colors of the RGB LED available on the GS70 which later can be activated with FN key + 1 / 2 /3 / 4 keys for each configured layer.

Not a fancy feature but it might comes in handy if the keyboard layout doesn’t match the current keyboard on your GS70. Here you can configure which profile to be activated when an application is launched to suit your current mood.

Enabling the statistics will record details such as most frequent pressed keys so you can plan for the best macro configuration that will help to makes your daily tasks, gaming, etc easier.

We’ve ran a series of system stress test with Prime95, Intel Extreme Tuning Utility, FurMark that has been widely used by enthusiasts around the globe for system stability test. While the stress test generates heat, we’ve recorded the temperature reading for both situation where the cooling fans operate normally and with Cooler Boost enabled.

Battery Life
The battery life isn’t looking very good when it comes to heavy use – it lasted only for about 1 hour 21 minutes under heavy gaming session on high performance mode, around 3 hour 14 minutes on movie session and 4 hour 23 minutes on web surfing.

In order to test the capability of the GS70 2QE, we have opted for ultra settings on all the games and synthetic benchmark which will be tested in this review. We take 30 FPS as the bottom line for our test because it’s a playable frame rate that is commonly seen on game consoles.

Most games are playable when we’re on Green mode and Comfort mode, except for Crysis 3. Shifting to Sports mode sacrifices the temperature for greater good – it unleashes the maximum potential of the GS 2QE and most games tested runs at decent FPS with no significant stuttering, but you will need a decent cooling pad for this.

We used the Far Cry 4, an open-world survival shooter video game from Ubisoft Montreal to check on some of the new feature we can expect from the GTX 970M: 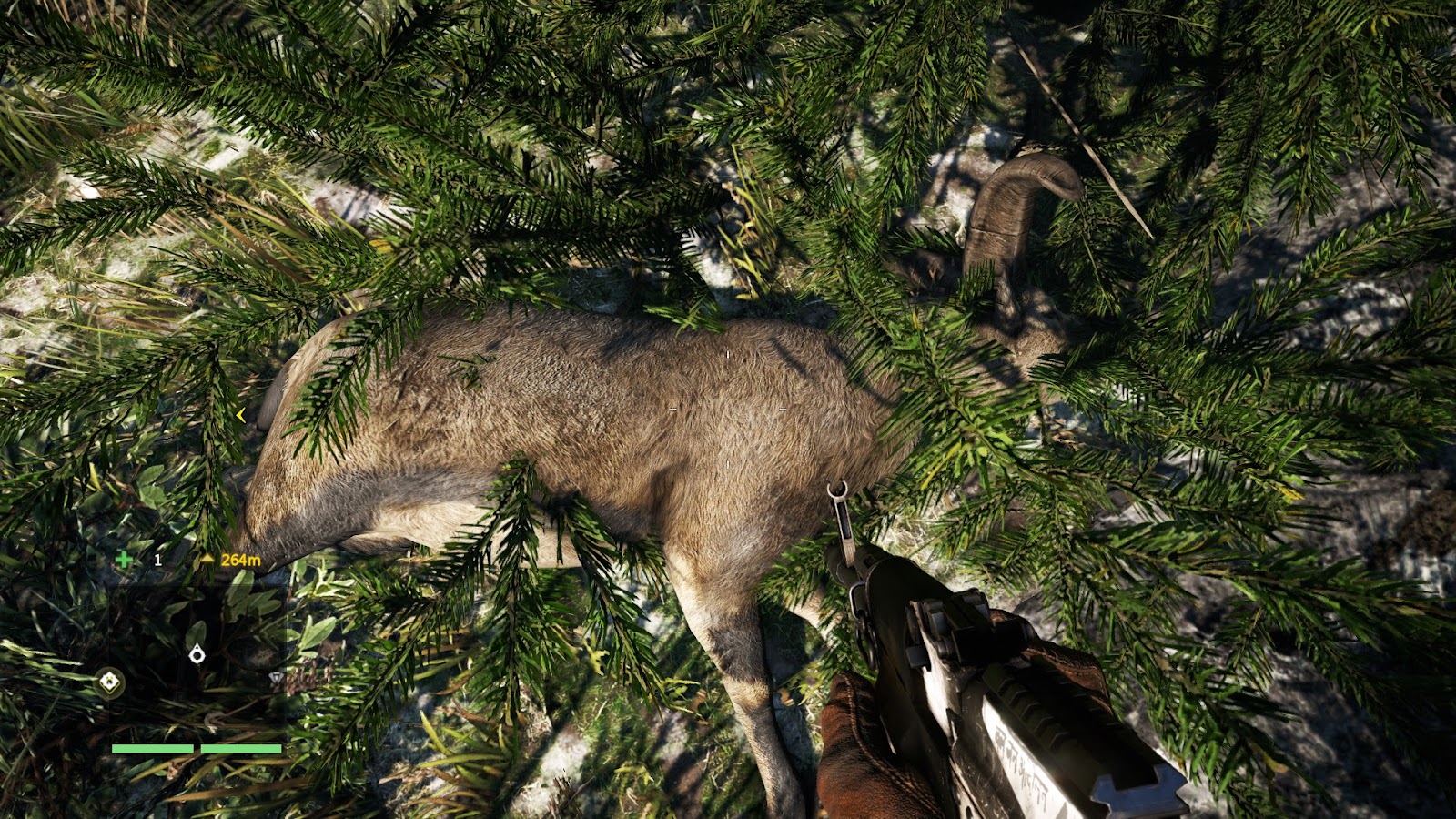 Without enhancement from NVIDIA Hairworks, the fur of this goat that we’ve hunted down with a flat texture look – dry and stiff. 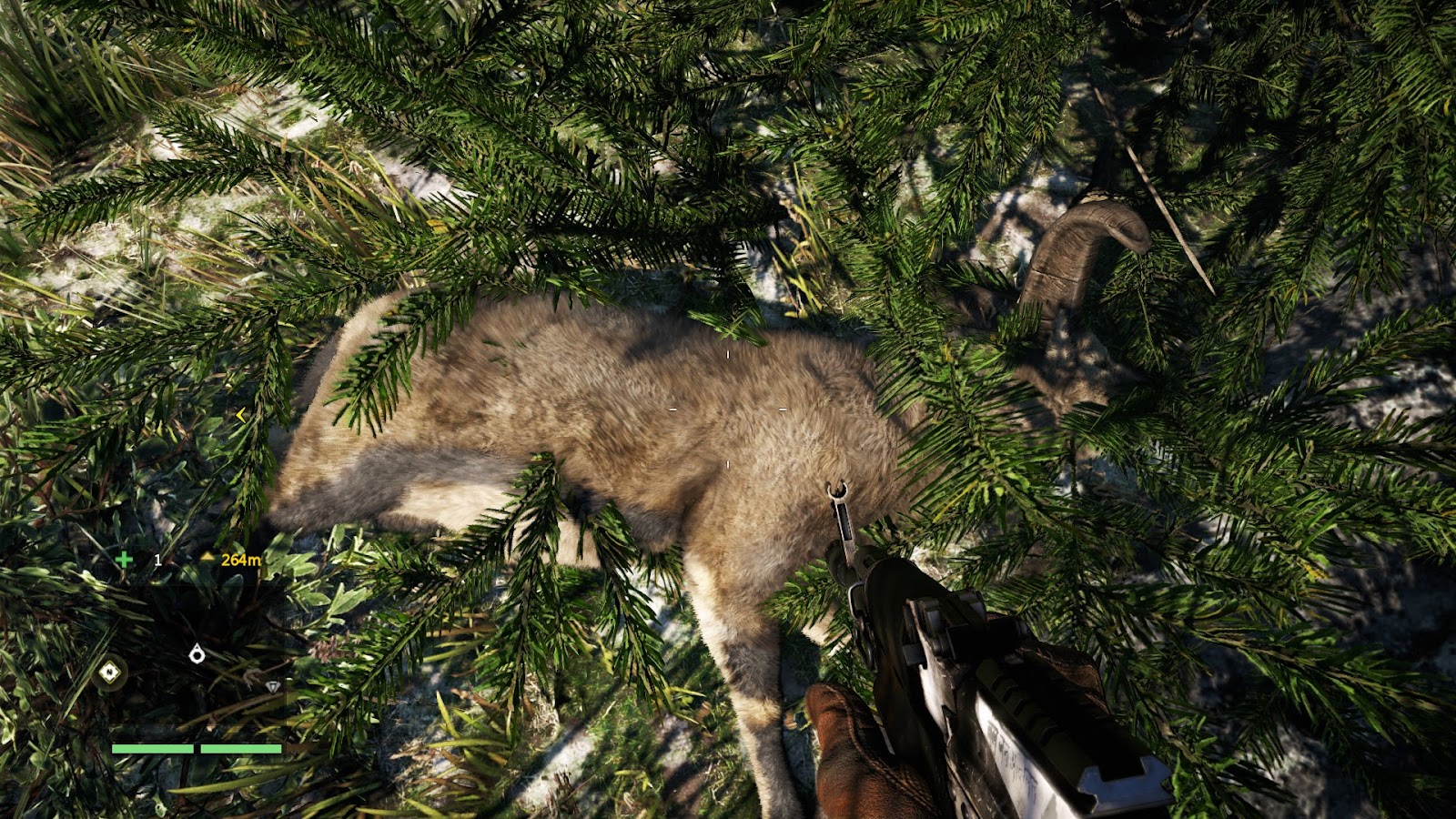 With enhancement from NVIDIA Hairworks, the fur of this goat looks much fluffier and lively. 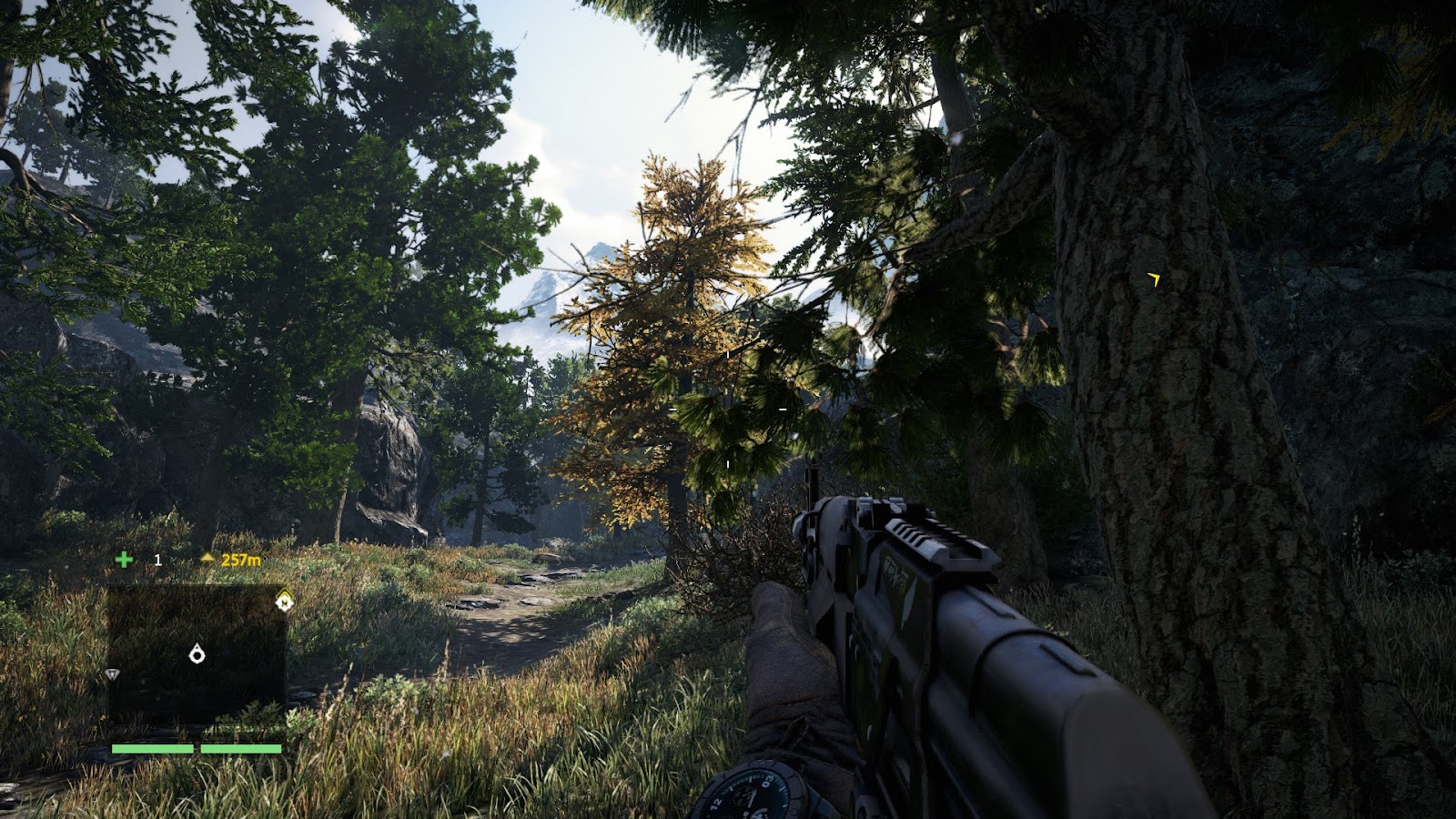 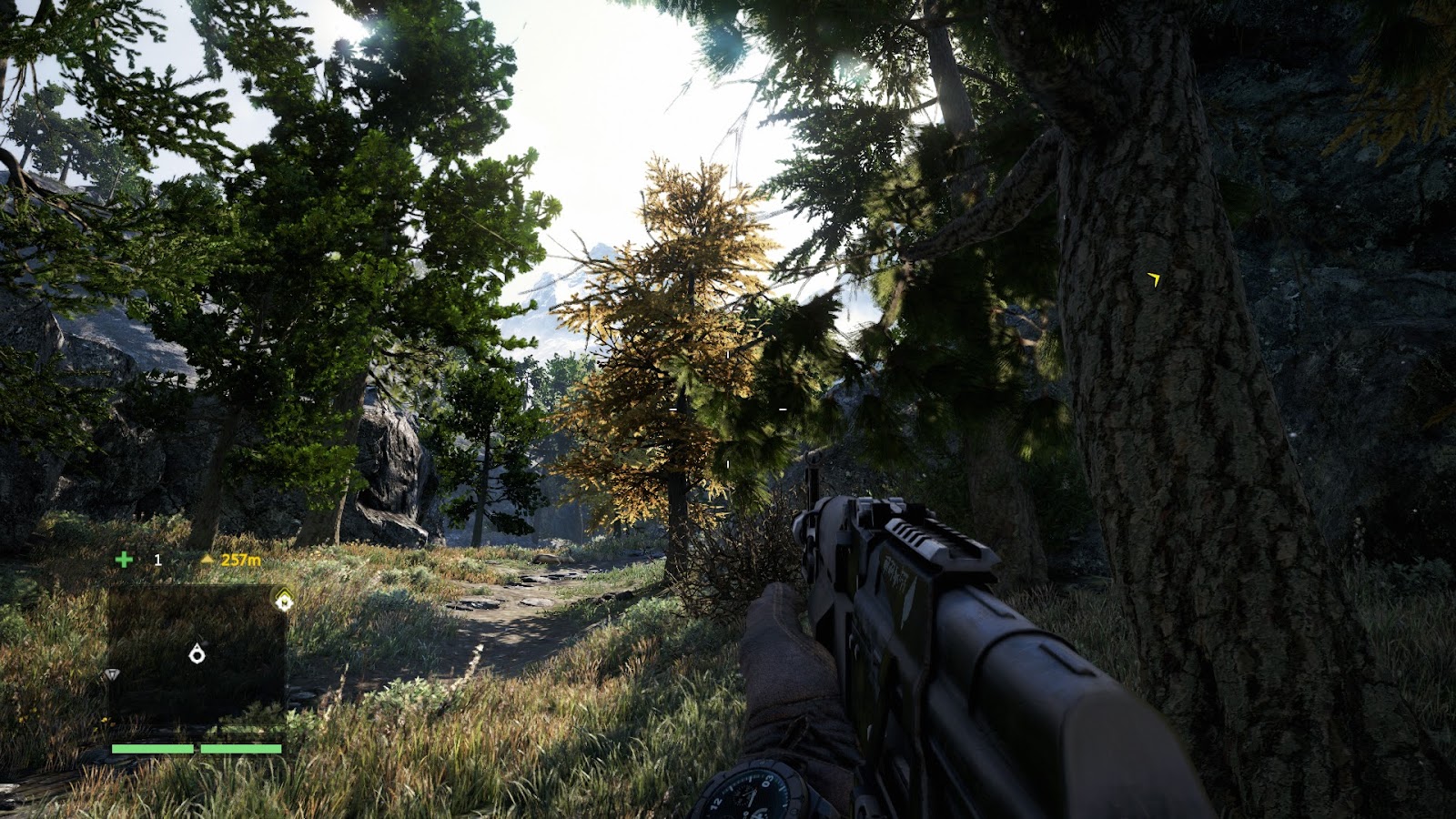 Audio
The Dynaudio speakers delivers clear and powerful sound stage during gaming and movie session that is pretty satisfying but maxing out the volume somewhat creates a crackling sound – seems that this applies only for movies we’ve watched on the GS70 2QE, as everything sounds just fine during gaming session. Music wise, classical / ochestral music sounds the best among various genre of musics tested.

Keyboard
When it comes to gaming keyboard, we’re expecting for design and feature that is beneficial to gamers. Designed by the renown gaming peripherals manufacturer SteelSeries, the keyboard on the GS70 2QE Stealth Pro comes with fancy lighting and key mapping that appears to be helpful for the gamers, but we find that the keyboard itself is lacking of the N-key rollover feature that has been widely used on most expensive gaming keyboards on the market.

We’ve tried the commonly used key combination for FPS games and everything seems well for now.

When we tried playing rhythm games that requires simultaneous keys to be pressed at the same time, the signal blocking issue arises and the maximum amount of keys that can be registered simultaneously is limited to 6 keys (not including modifier keys). We’ve tried configuring the key configuration on other area of the keyboard and there’s not way for us to resolve the issue.

Verdict
In terms of graphics performance, we find the benchmark result with FPS that circles around the value of 30 is still a comfortable FPS count to game on. Do note that the FPS we’re getting is the result of having the graphics settings set to ultra, if you feel uncomfortable with FPS lower than 60, turning down the graphics to high / medium will yield higher FPS count.

Battery life and temperature has always been a concern when it comes to slim design notebooks, the performance shifting feature might not be a total solution to overcome the shortcoming, but it’s a pretty sweet feature to have on the GS70 2QE.

Still, if you still wanted to enjoy a longer gaming session on battery, shifting to Green mode and lowering the graphics quality of the game is recommended.

Another subjective issue that we would like to highlight is the keyboard roll-over feature. While not everyone is going to press all of the keys on the keyboard at the same time, the N-key rollover is still an important feature that should be cater of if its targeted audience is to be gamers from all kinds of game genres.

In conjunction with the Predator launch event, Acer Malaysia is launching a series of new gaming devices to its Acer...