APU, aka Accelerated Processing Unit is AMD’s attempt to combine a CPU and GPU into a single chip. Known to provide a decent in-game performance for a fair price, the APU has become a viable option when it comes to building a budget gaming PC.  These APU runs on motherboards with AMD chipsets such as A85X, A75, A55, A88X, A78, A68H​, A58 which A88X as the highest offering among all the AMD chipsets for APU.

We’ll be taking a closer look at the ASUS A88X-Gamer, a AMD A88X chipset based motherboard made for gaming purpose – million thanks to ASUS in provision of the A88X board for today’s review.
*The ASUS A88X-Gamer is priced at RM439
Specifications
Packaging

The front of the box slightly resembles a ROG branded motherboard that is kept simple but with the the ROG logo, as the A88X-Gamer isn’t a product under the ROG brand.

The A88X-Gamer supports up to a maximum of 64GB DDR3 memory and speed up to 2400MHz via overclocking.

While there’s no support for SATA Express on the A88X-Gamer, there’s 8 SATA ports that allows you to connect up to 8 SATA HDD/SSD to your system.

The A88X-Gamer comes with 2x PCI-E x16 slots which made Crossfire mode possible; you can either setup for crossfire configuration with a pair of AMD Radeon graphics card, or crossfire a A10-7850K APU with a R7 250 or R7 240.

The same SupremeFX audio chipset which can be found on a ROG branded motherboard is made isolated from electromagnetic interference (EMI) by a protective shield which ASUS claims to be able to effectively eliminates analog interference to ensure flawless sound quality.

The rear I/O comes with the following component
UEFI BIOS 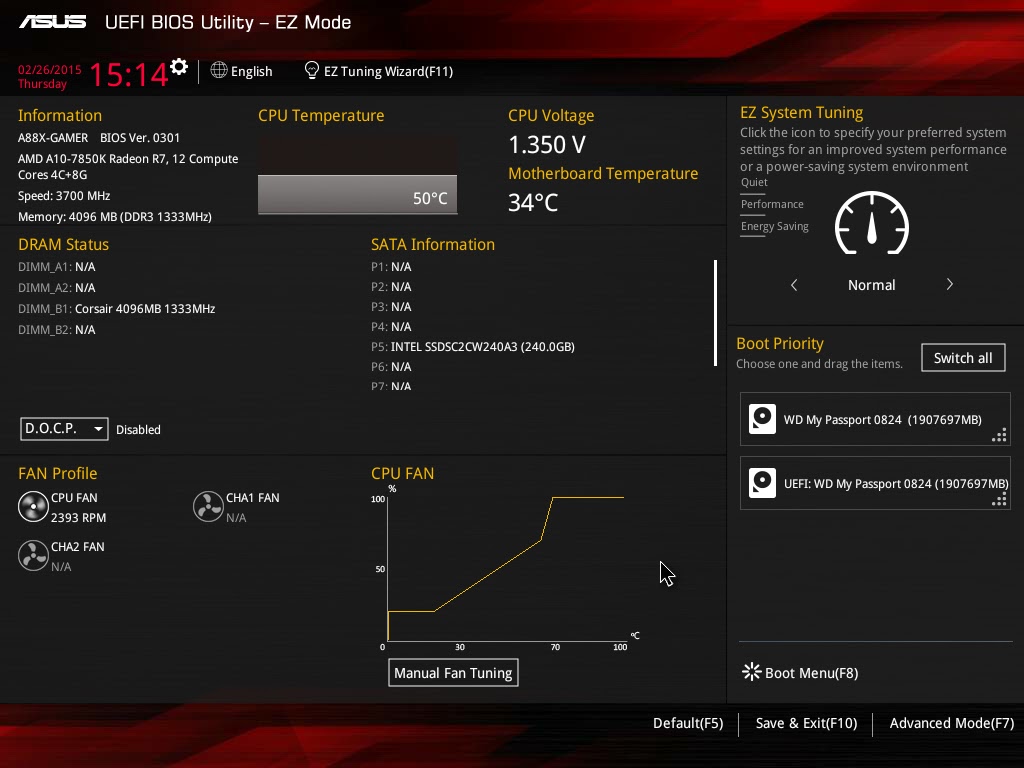 The UEFI BIOS interface shares the same color scheme of the UEFI BIOS on the ROG branded motherboards. Accessing it the first time will lead you to the Ez Mode interface that has all the basic functions to allow quick and easy system optimization even to entry level users. 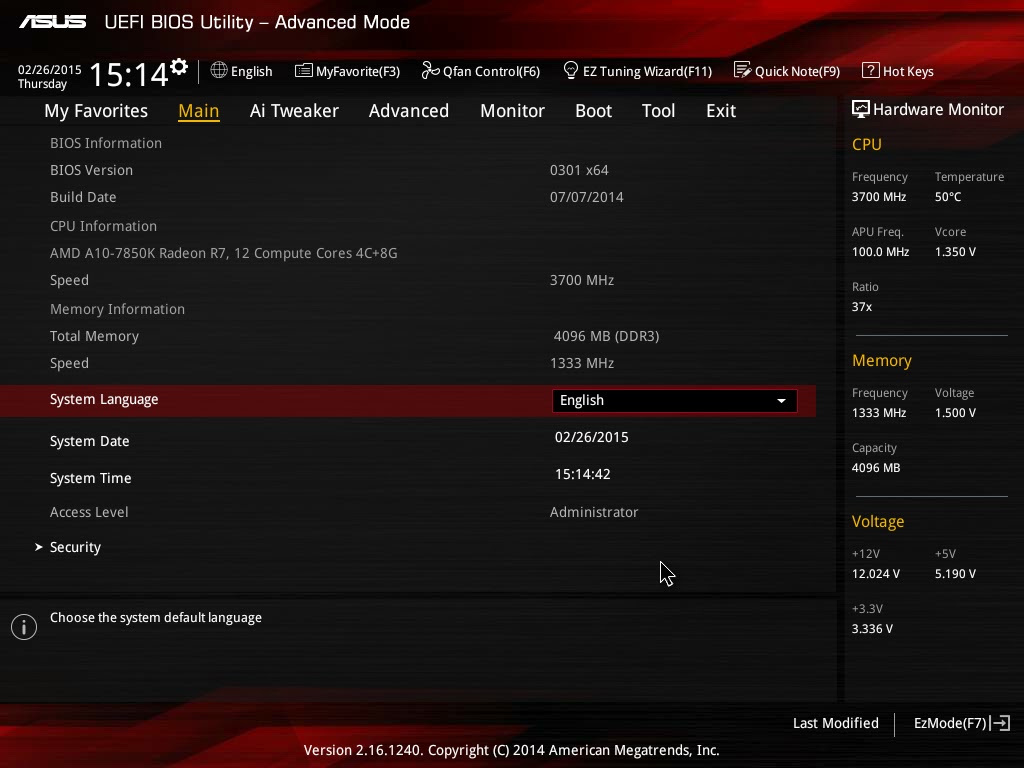 Advanced users may opt for the Advanced Mode for more tweaking options. The main tab basic details of your system and also the option to adjust your system date, time and language. 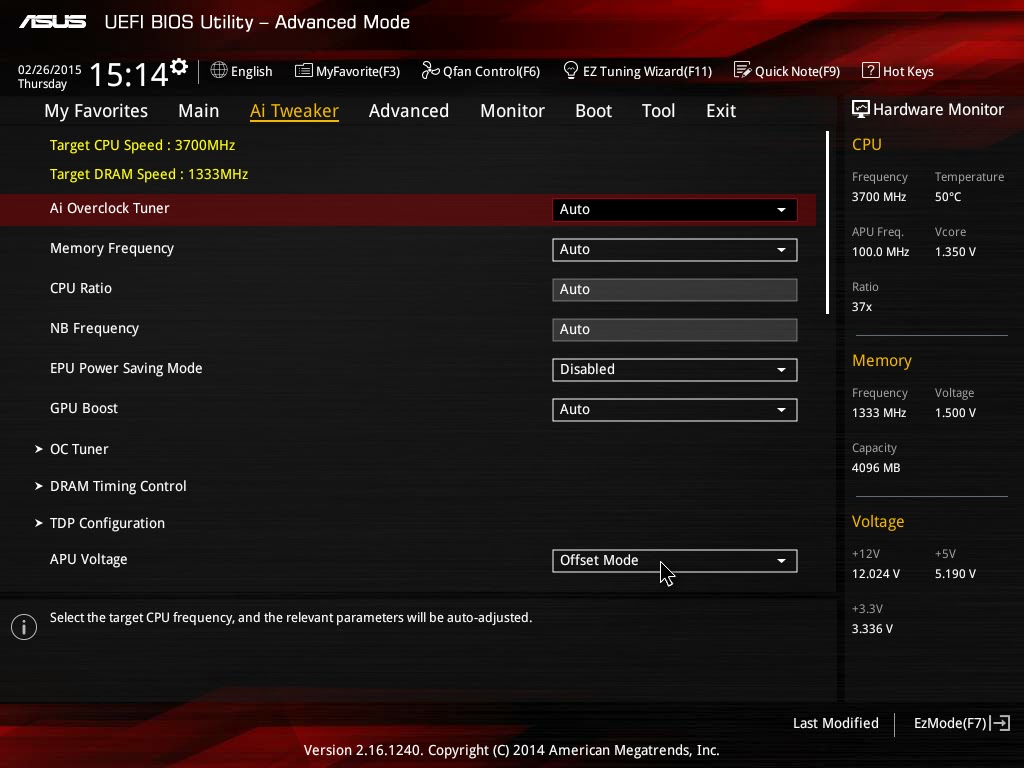 The Ai Tweaker is where advanced users will spend vast amount of time to tune their system clock speed, voltage, strap, etc. Highlighted in yellow are the brief details on the targeted outcome of the current system tuning. 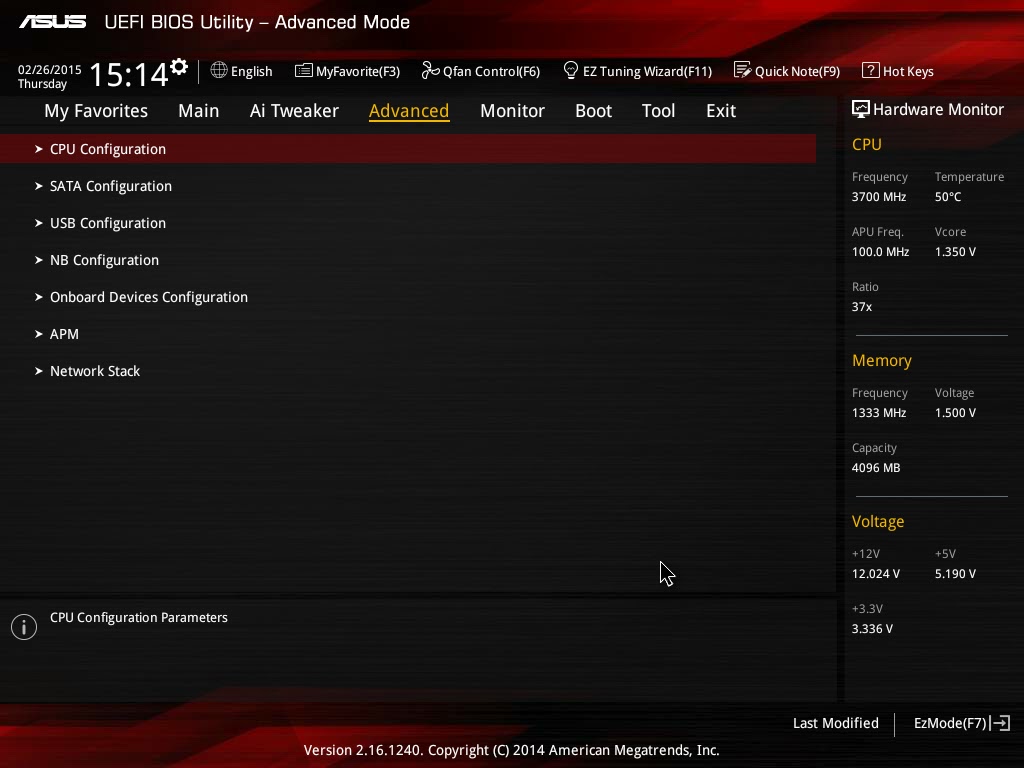 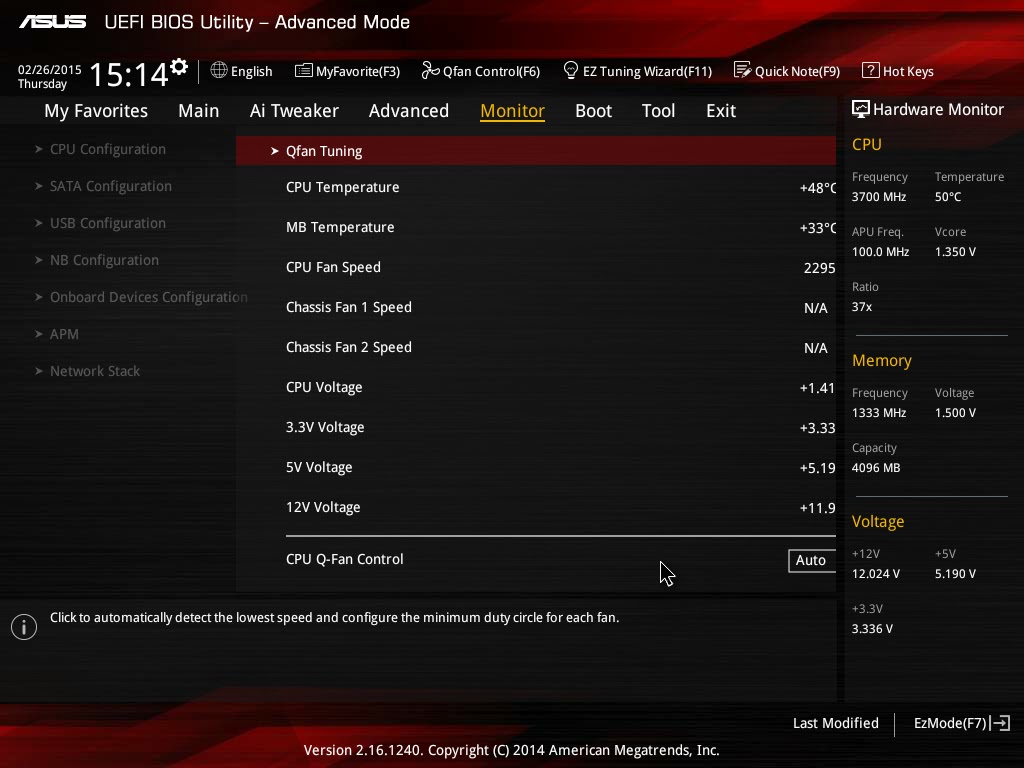 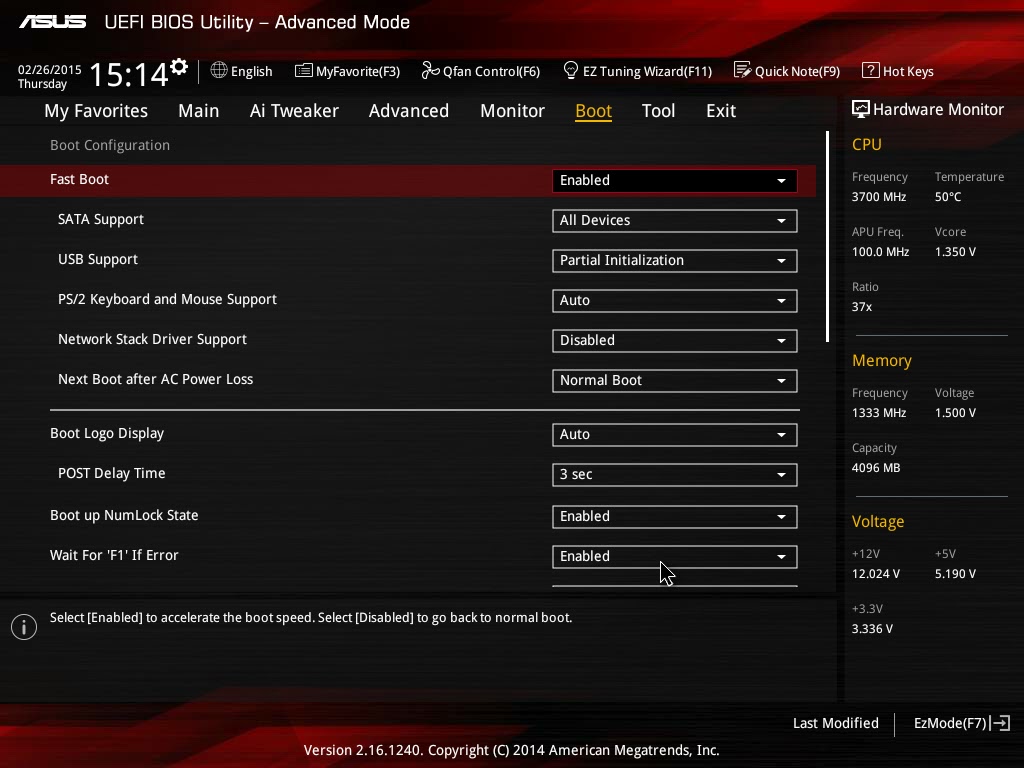 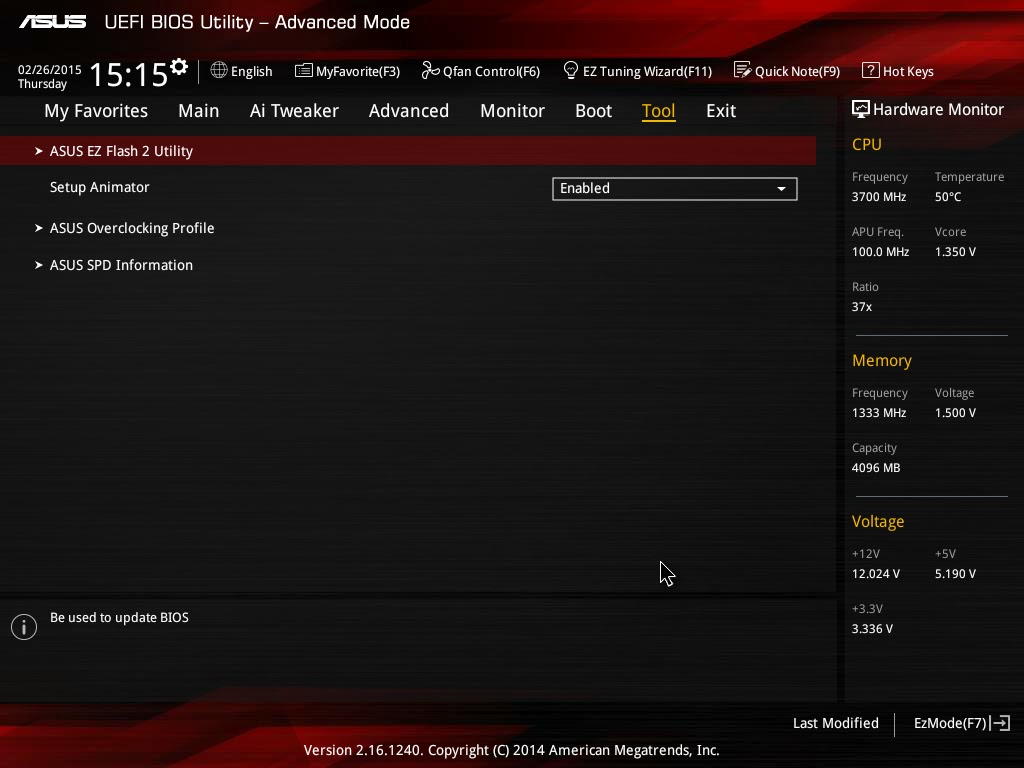 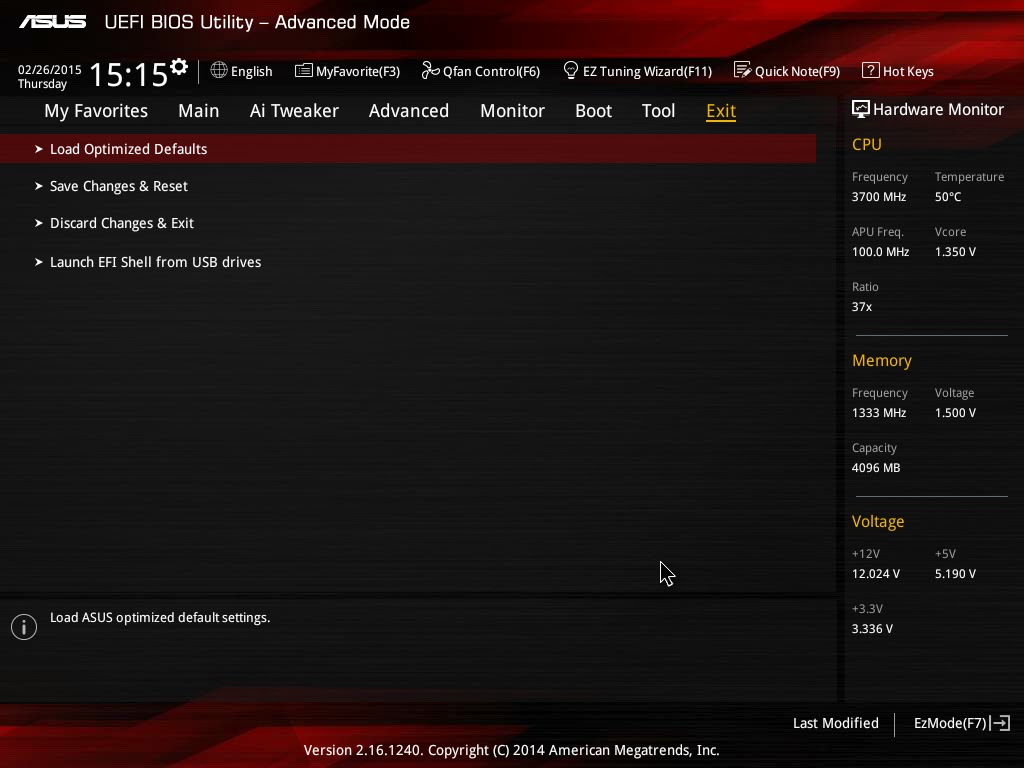 The functions in the Exit tab is pretty common but still worth to mention.
Load Optimized Defaults – Basically this will restore the changes done to the factory default settings.
Software

Clicking on the EPU option lets you adjust the Power saving formula profiles. Setting it on auto means that the system will run according to the needs of the system and will regulate the performance accordingly.

At Turbo V EVO menu, you can adjust the CPU frequency, CPU & DRAM Voltage, etc without the needs to access to BIOS.

By clicking the start button, your system will automatically tuned to the best achievable state as determined by the software itself.

And here is the result of the auto tuning on our AMD A10-7850K APU. It’s not record-breaking but from a stock clock of 3.7MHz to 4.1MHz stable is still an impressive result.
Fan Xpert 2

Fan Xpert 2  lets you adjust the speed of the fans connected to the on-board fan headers. Users may choose to set each fan manually or simply choose one of the four presets available at the bottom.
USB 3.0 Boost

System information utility allow users to navigate the details of their motherboard, CPU and Memory – similar as the CPU-Z often used by advanced users during over-clocking session.
Push Notice

Push Notice is an utility that notify you on selected event via mobile devices so you will always be updated with your system status when you’re few miles away from it.

Moving on to test, we’ve build the following system configuration using the A88X-Gamer:

The A10-7850K comes with a maximum boost clock of 4.0GHz out of the box and can be overclocked to achieve higher clock speed. We attempted to raise the clock speed manually and with the help of the auto tuning.
The Auto Tuning result doesn’t turns out very well as 4.1GHz is just a minor boost from the already 4.0GHz boost clock. With manual adjustments, we’re able to achieve 4.5GHz without any need of raising the CPU core voltage and it’s able to go through the benchmarks conducted without any stability issue.

Result of sequential read/write for Intel 520 Series 120GB (left) and Crucial M500 120GB (right), everything seems fine at this point.

Result of sequential read/write for Corsair Voyager GO under normal mode (left) and USB 3.0 Boost mode (right). There’s a slight improvement after the USB 3.0 Boost is enabled, where the initial read wasn’t able to reach even a nibble of 80 Mb/s is now able to reach 80 Mb/s and a little bit more.

The ASUS A88X-Gamer comes aesthetically pleasing to the eye, decent overclocking potential and offers many features of a higher-end motherboard like the ROG branded motherboards i.e SupremeFX audio chip, Enhanced ESD Protection design, use of 10k black metallic capacitors, etc.
For one who is planning to build a budget gaming rig with an AMD APU, the ASUS A88X-Gamer isn’t the cheapest choice available as there are other A88X chipset boards that comes in a cheaper price. Still, the use of higher end components found on ROG branded motherboard on the A88X-Gamer is an added point which we would strongly recommend to spend an extra cash on.

There is quite a number of the new revision of the X99 chipset motherboards that supports both Intel's latest Broadwell-E...