BitFenix quickly gained the attention of enthusiasts around the globe with the announcement of the now iconic Prodigy, Colossus. Shortly after announcing its first audio product the BitFenix Flo headset, BitFenix ventured into power supply units with a given name Fury. Colorful packaging isn’t really something common for BitFenix, but things are kept simple and clean without much technical terms like most branded power supply – at least we know that its a 80 plus gold certified power supply and it comes with a 5 year warranty. At the back of the box you’ll find some unique looking icons that gives a brief description on the features of the power supply. A quick installation guide can be seen upon unboxing. We took out all the accessories included and here’s what we have: screws, cable ties, power cord and individually sleeved modular cables. The chakram like design can be seen at the side of both fan grill and the top of the power supply, a rather unique design that you don’t get to see very often. At the other side of the PSU we can find the power output details listed in a table. The BitFenix Fury 550G is capable of delivering 504 watts via the +12V rails, which is plenty much enough for most high-end graphics card, i.e: AMD R9 290X, Nvidia GeForce GTX 980. Honeycomb mesh grill is known to be able to provide greater airflow through the entire area of the honeycomb surface and the design can be found on majority of quality PSU on the market. From here we can see that the modular slots isn’t fully labeled as the PCIe and CPU slot is the only labeled slots. It might not be a big deal for the enthusiasts who already know what cables should be plugged into these slots, but we find it a little unpleasant seeing partially labeled slots. Like any other modular power supply, you can choose to plug in the cables that you need. Without any unused cables tangling in the way, cable management is made much easier. The cables and sleeves used is flexible enough to bent at will, which is very helpful for cable routing.

As Tech Critter do not own any industrial grade load tester to perform intensive tests on the power supplies on hand, we will be performing tests from the end user’s angle. We’ve mounted the BitFenix Fury 550G on our Vector Bench Case and have gone through numerous tests which involves stress test and overclocking various hardwares i.e: Intel i7 4770K, Intel i7 4790K, AMD A10-7850K, AMD FX-8320E, AMD R9 290X, AMD R9 280X, Nvidia GTX 980, Nvidia GTX 970, Nvidia GTX 960, etc – glad to report that no issues is encountered, it survived various stress test with no coil whine issue found throughout the testing period.

Higher cost and availability issue is pretty much the only downside we can find so far(As there’s no news on whether the power supply will be brought to Malaysia), as we don’t see anything bad from the BitFenix Fury 550G. Despite of being costly, we would still recommend it not only because of its 80 plus gold rating and 5 year warranty, but for the individually sleeved cables as well – especially for those who always wanted to have sleeved cables on their power supply. 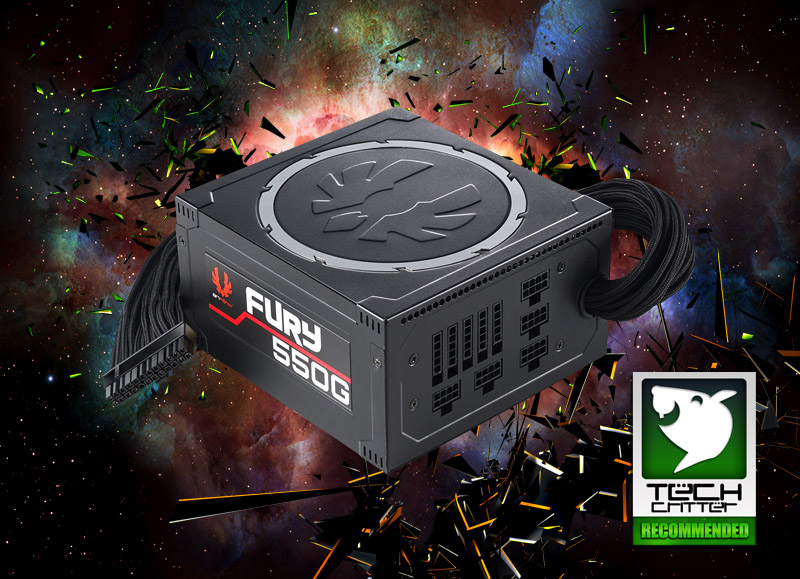