If you’re gaming a budget, looking for the best peripherals money can buy is probably a challenge, especially with today’s confusing market for gaming peripherals. The Gamdias Demeter might just be the mouse to look for, at only RM99 (SRP) let’s look at the offering from the Goddes of Harvest; already the name sounds promising. This might just be the next G400 that everyone (in Malaysia) have been waiting for.

Again, this is straight from the Gamdias official website, feel free to explore the link.

Much like the Gamdias Apollo and Hades that I reviewed a while ago, the Gamdias Demeter comes in an overall white box covered with the translucent etched logos that I have come to like the past few weeks. You can have a peek at the actual product from the triangular window and an illustration of the Demeter is just right beside that along with a few of it’s features highlighted at the bottom right side.

Unlike it’s “brothers”, the packaging of the Demeter doesn’t have a front-flap, which to me, is better as it helps drive down the cost of the product as well. 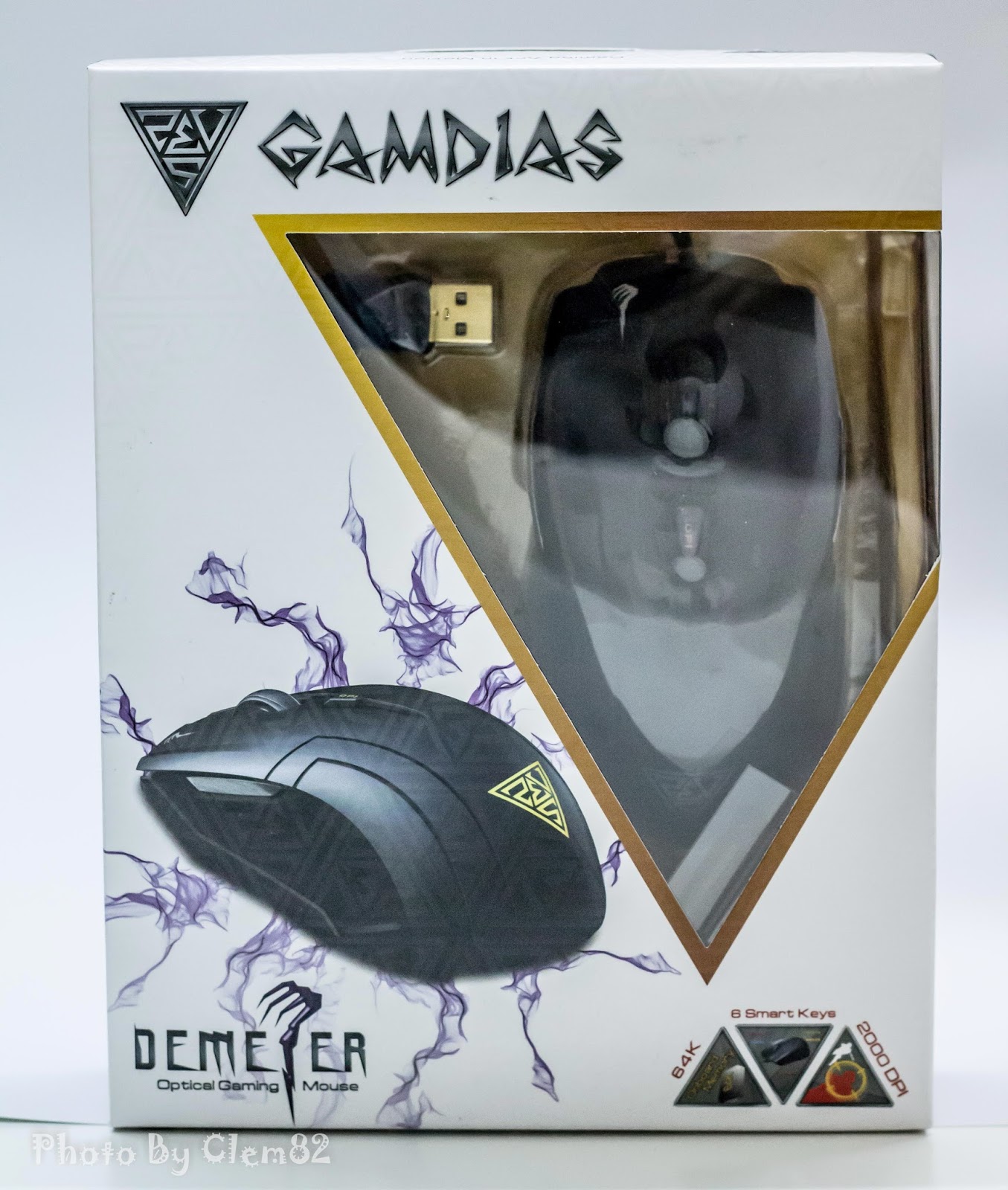 The back is plastered with the features of the Demeter with a brief description in 10 different languages and a visual interpretation of the Goddes Demeter by Gamdias at the bottom. 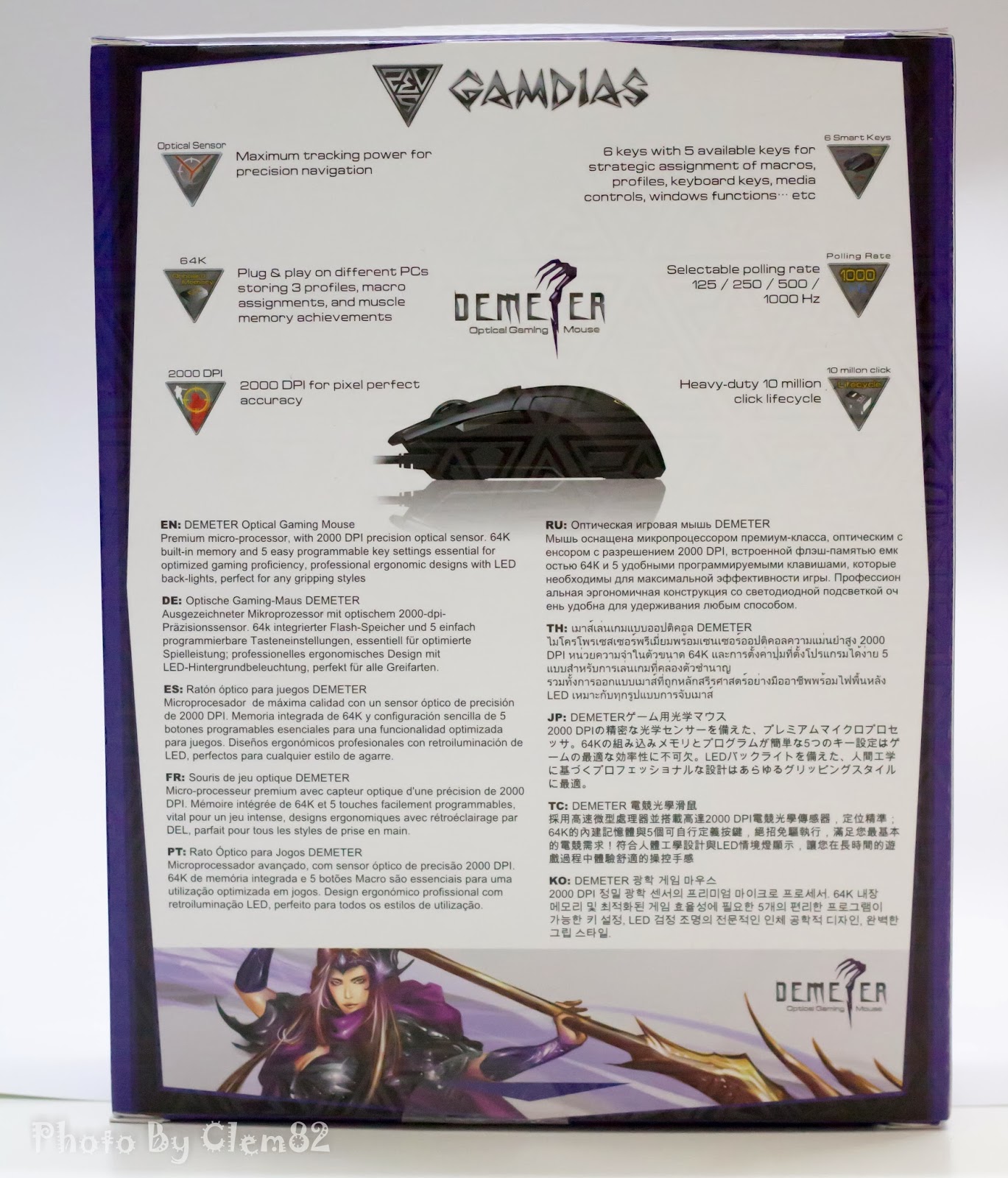 Inside, you will find the Demeter mouse, an installation guide and a set of stickers. 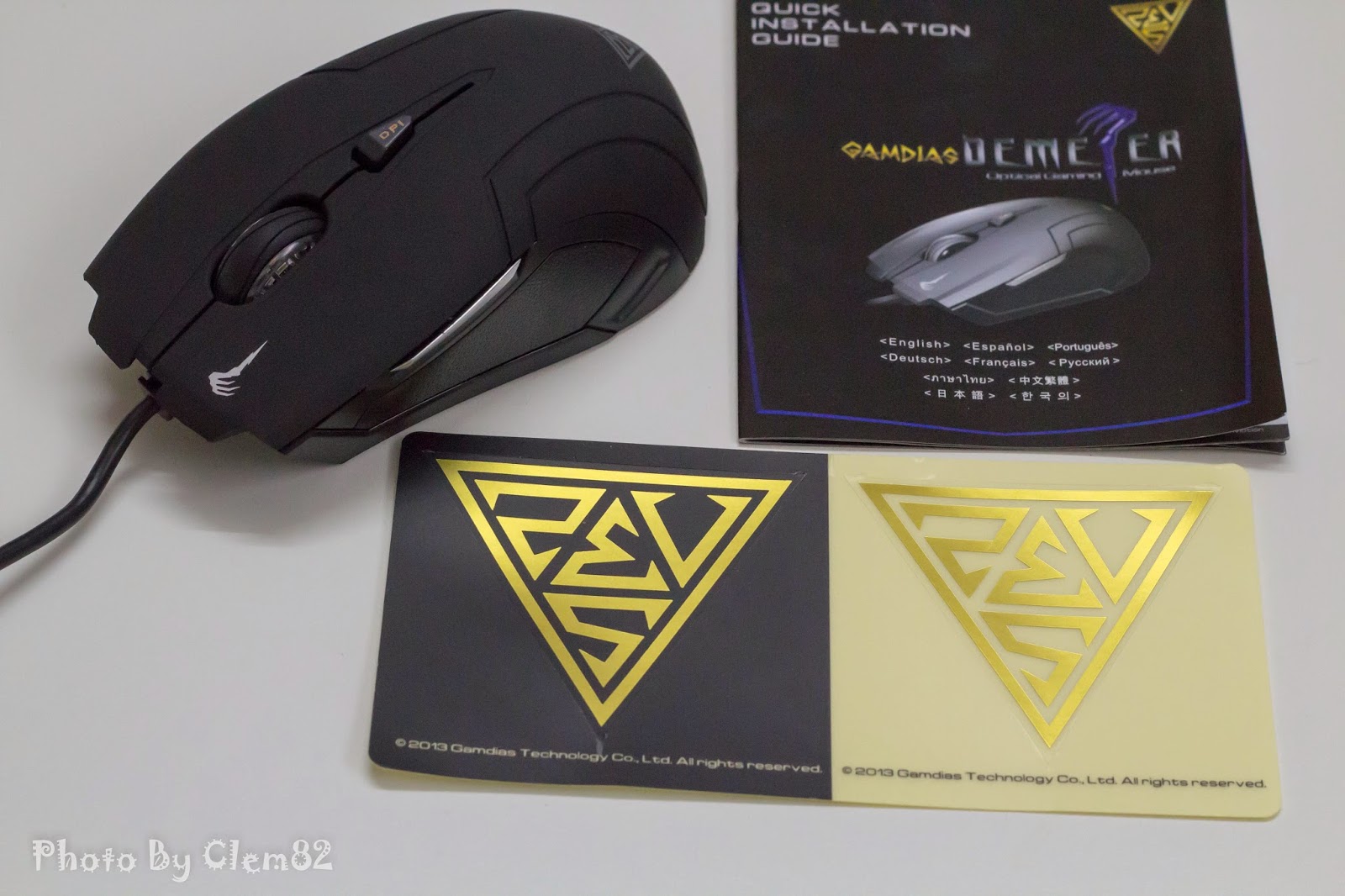 Despite it’s pricepoint, I’m happy to see that Gamdias didn’t take too many cuts off from the Demeter. Construction is solid enough but it is a little smaller and lighter compared to the Hades but still larger than the more specialized Apollo. The top is coated in rubber while the sides are matte plastic. 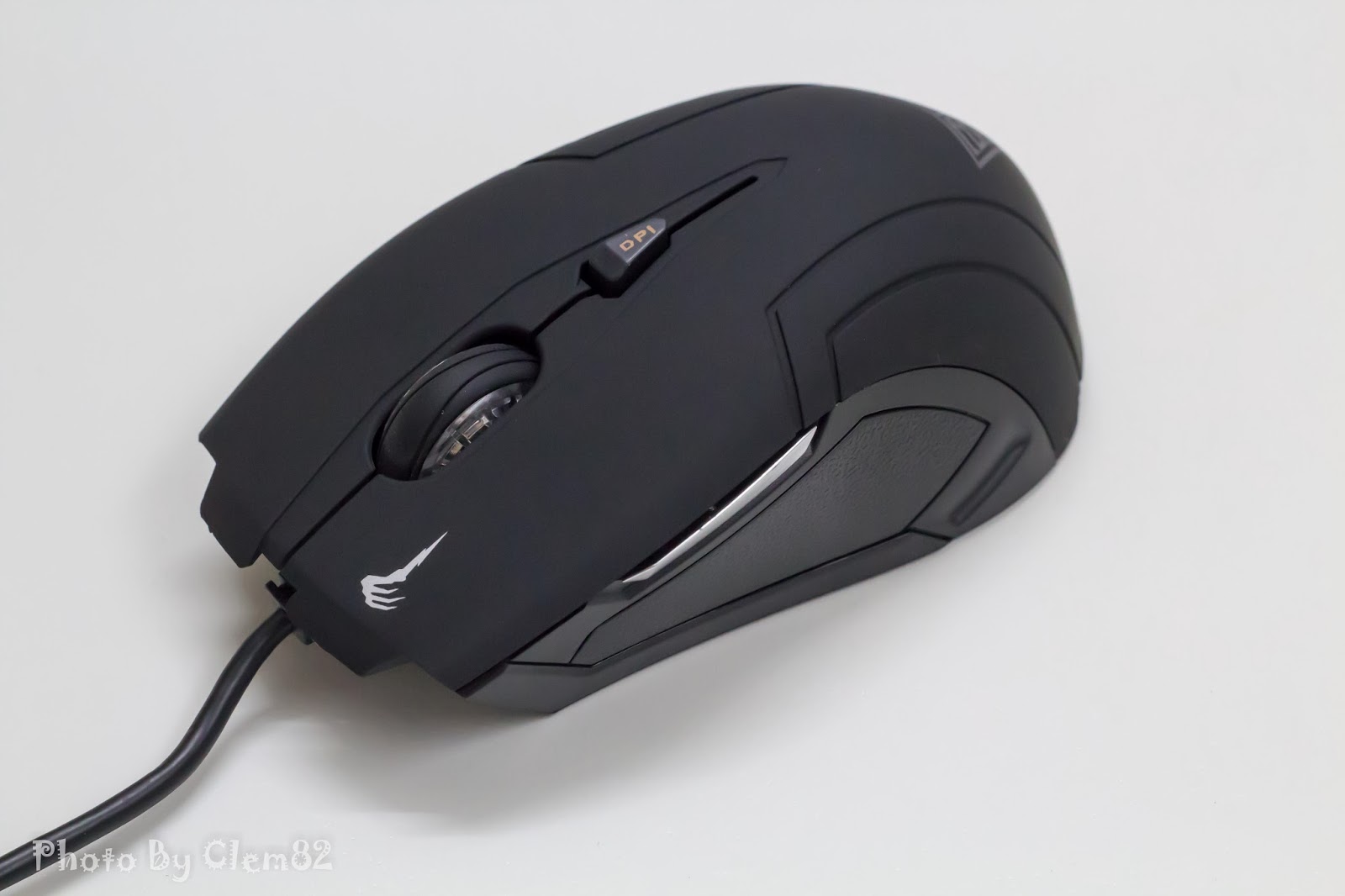 Looking from the front, the Demeter is a classic ambidextrous mouse. You’ll find an emblem is at the tip of the left clicker and right at the middle is the scroll wheel and dedicated DPI button. You can see that the cable is not braided but given the price the Demeter is coming in at, it is well understood. 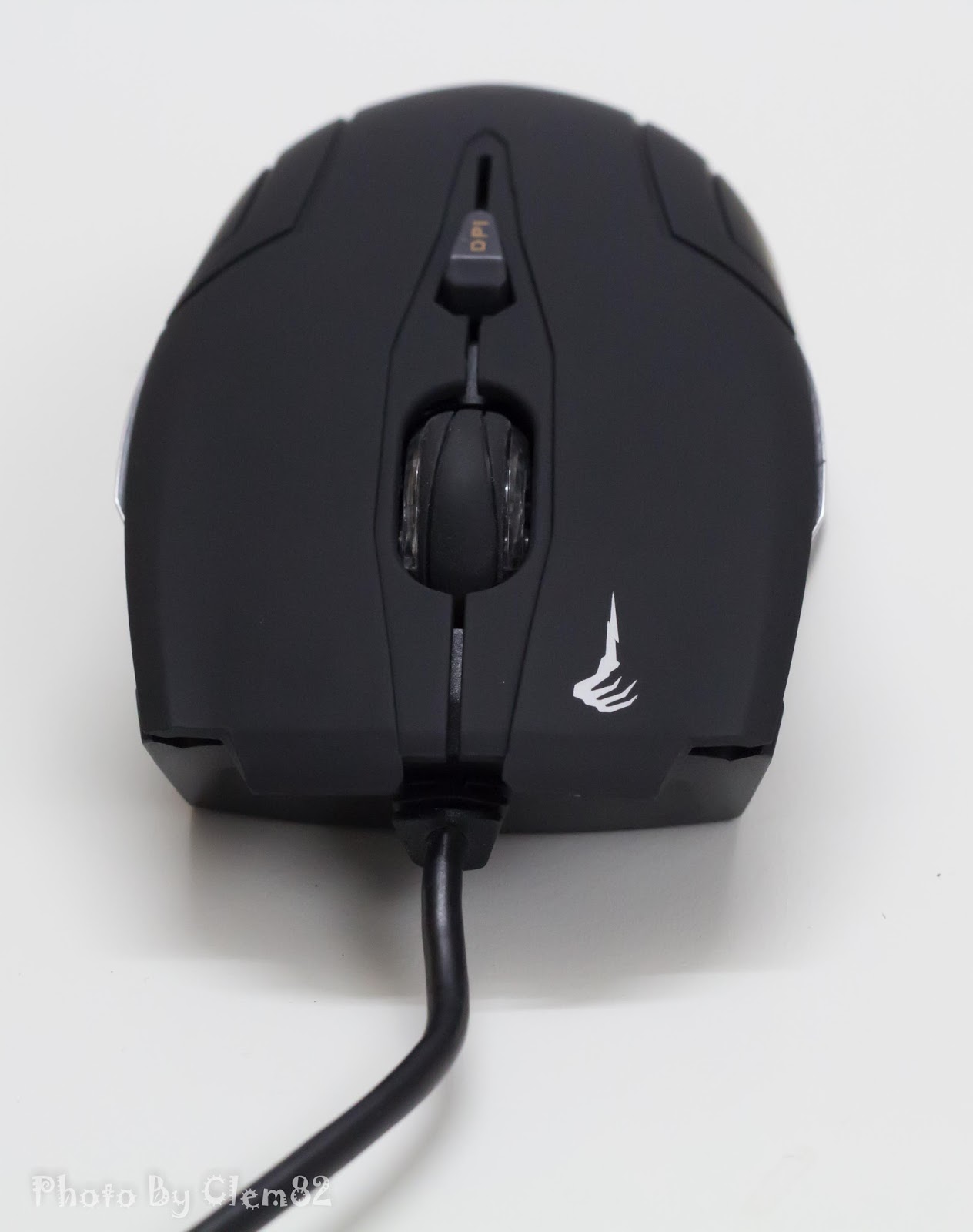 The back featured the Gamdias logo which will illuminate in Gold when powered on, flanked by receeded lines on both sides. 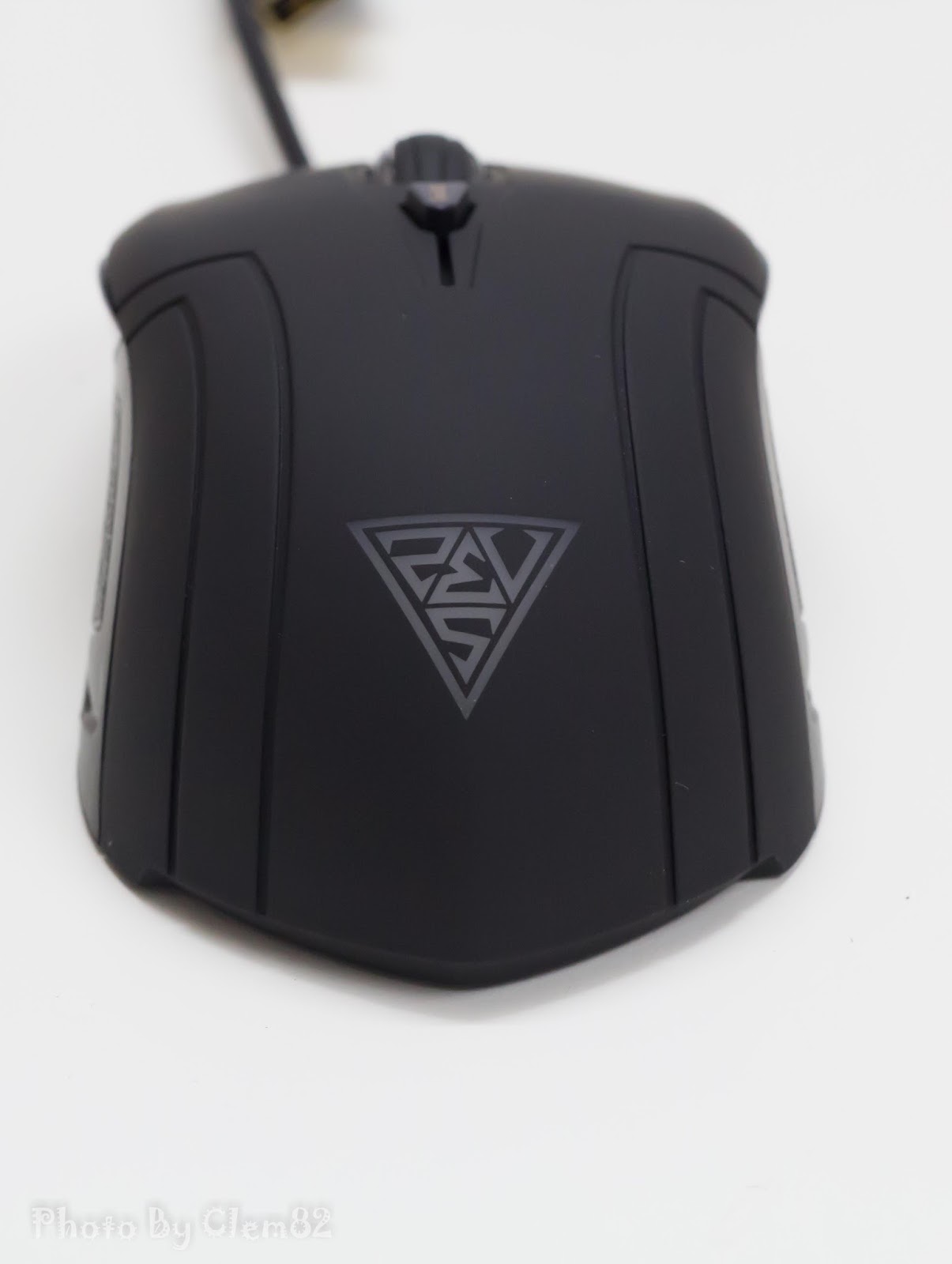 You’ll also find side buttons on both sides of the Demeter. 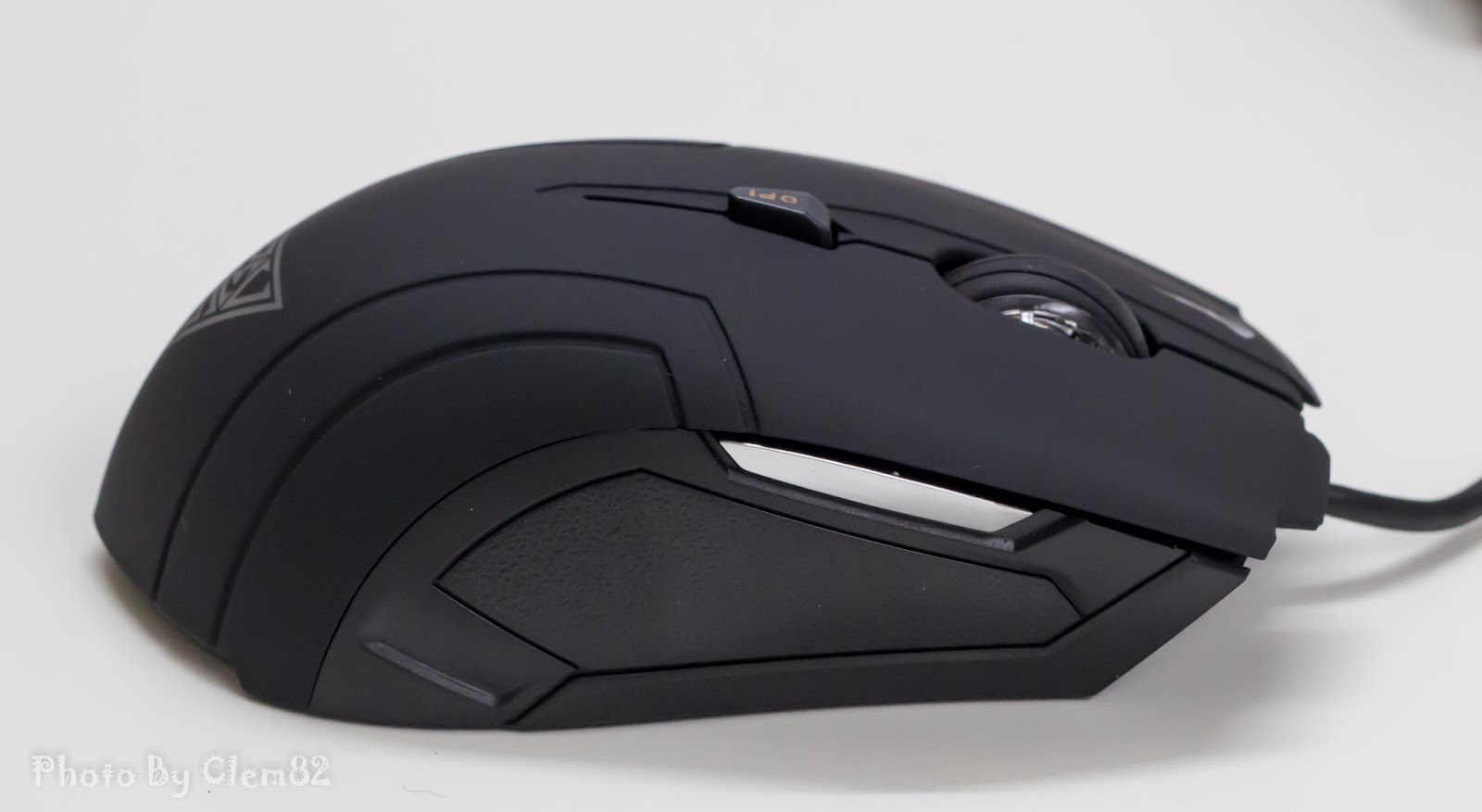 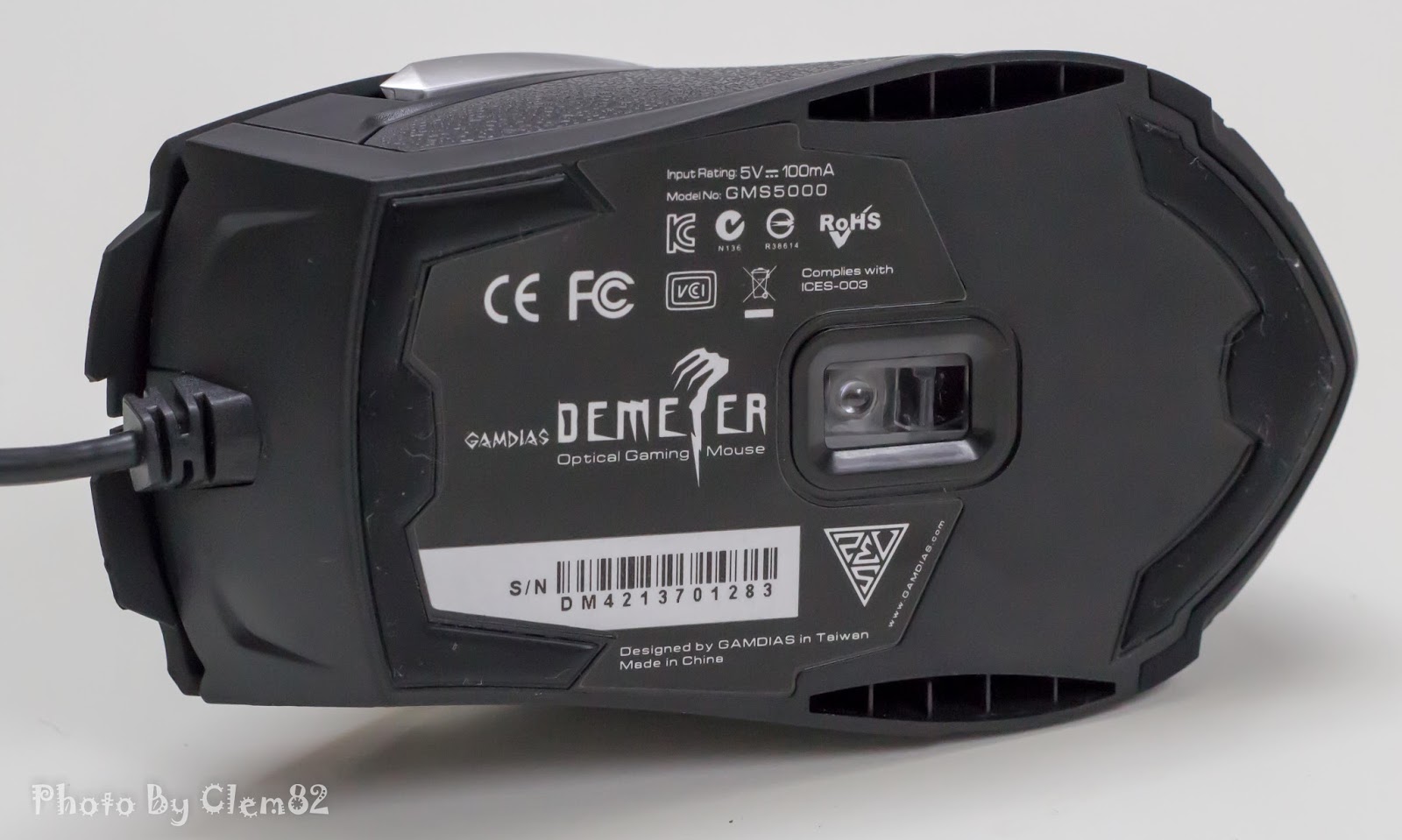 Placing it side by side to the Steelseries Ikari, you can see that the Demeter is slightly smaller and much narrower in comparison. 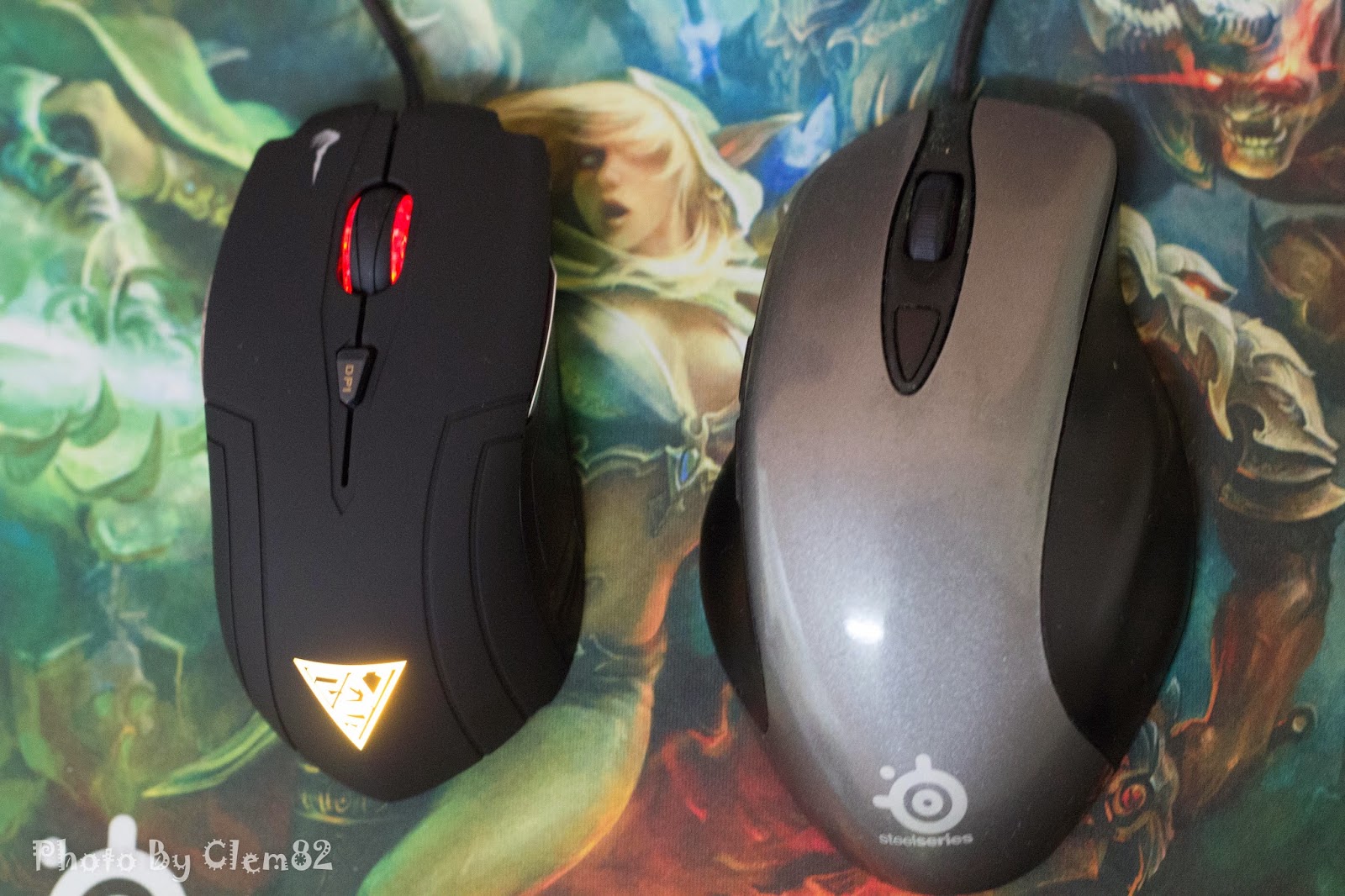 The Hera driver software automatically detects the Demeter and downloads the necessary updates to manage the mouse. This is truly convenient rather than having to install different drivers for different peripherals of the same brand. First time users should download the Hera driver application via Gamdias official website.

Straight up in the Key assignment tab, you’ll see Gamdias illustrated version of the Goddess Demeter at the background; FYI Gamdias took the trouble to customize the background for every product so far, a very commendable effort. Except for the DPI button, users could customize all the buttons to a function of their liking on 3 separate profiles. Options for Profile Match and Profile Hotkey is also available off the bat at the bottom right corner, though there are some minor issues with them. 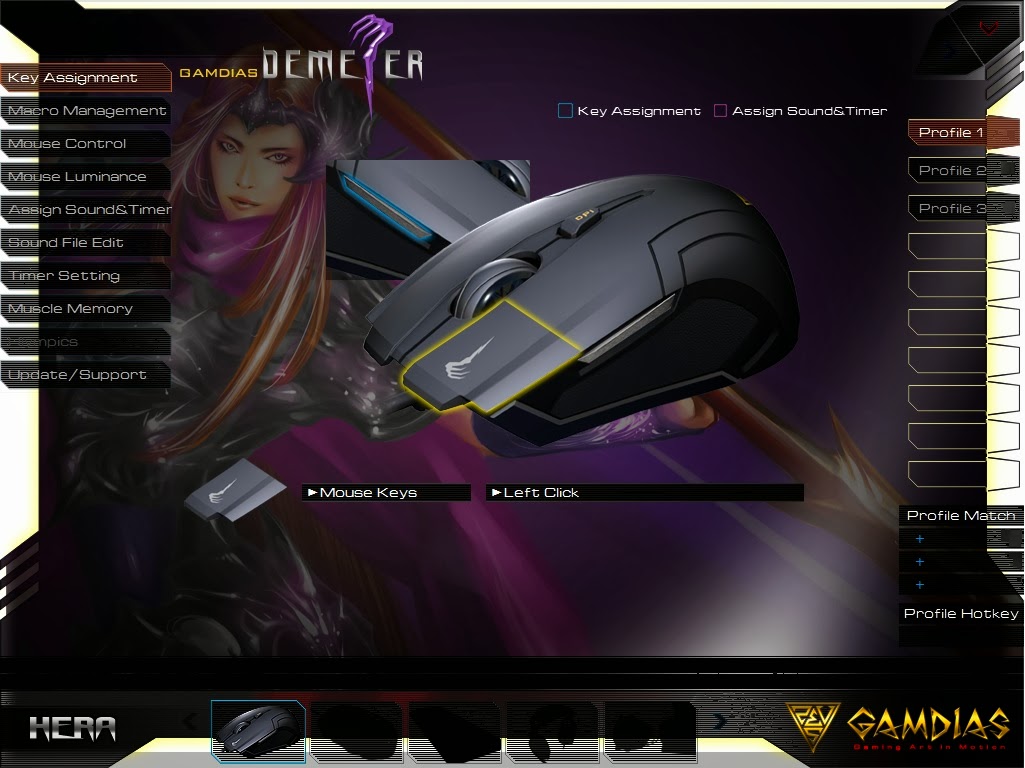 The only other difference (aside from the illustration on the background and number of profiles) in the software compared to when I reviewed the Apollo and Hades is that the Demeter has a maximum DPI of 2000 instead of 3200 at the Mouse Control tab. 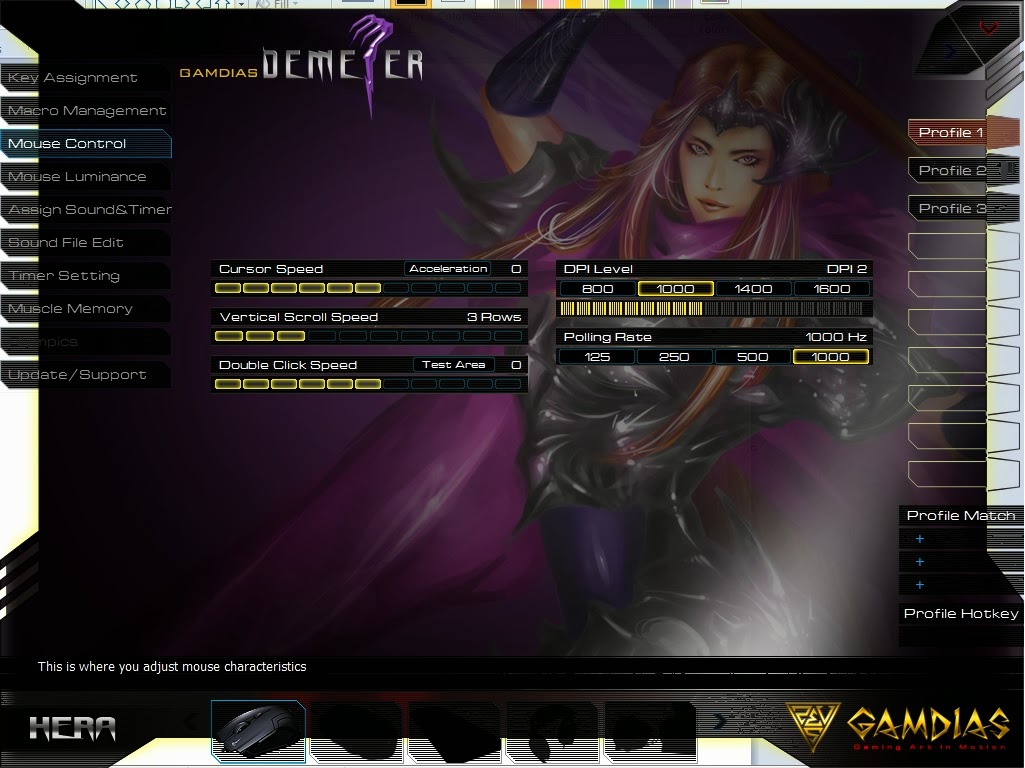 The full features of the Hera driver software is available on to the Gamdias Apollo Review Article as it is essentially the same driver software and therefore retaining the same functions (accurate to the version at the time of writing) with the Apollo and Hades, of which are more expensive offerings in comparison.

Just in case though, I have included the following screenshots of the other tabs available while the Demeter is plugged in. 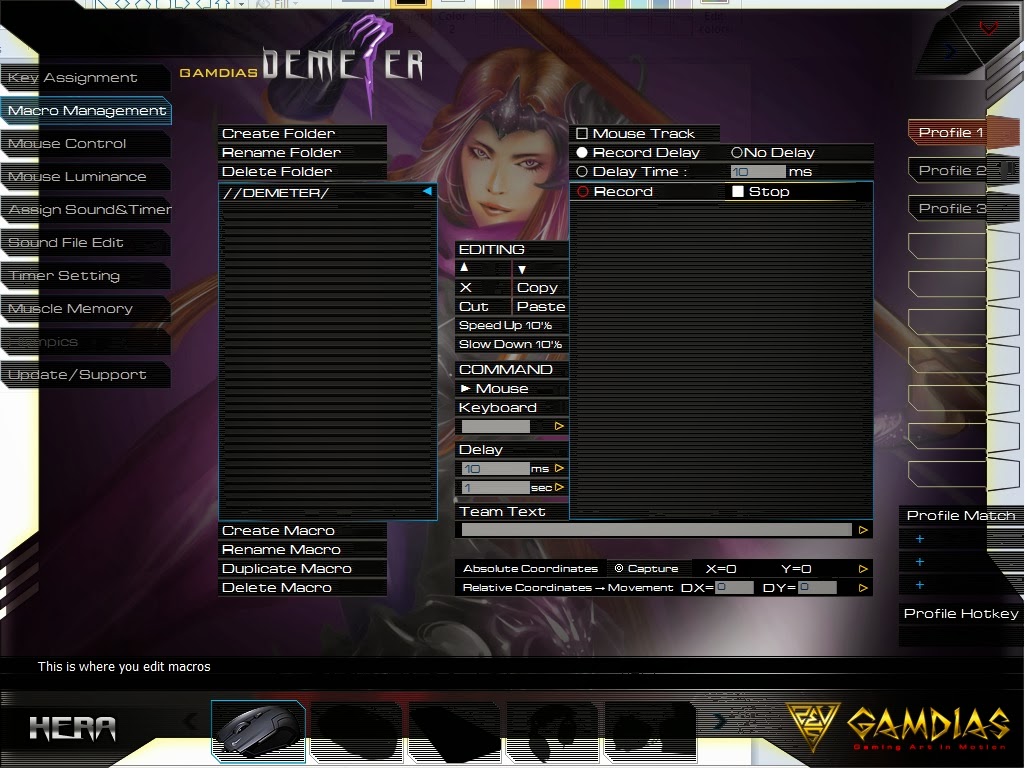 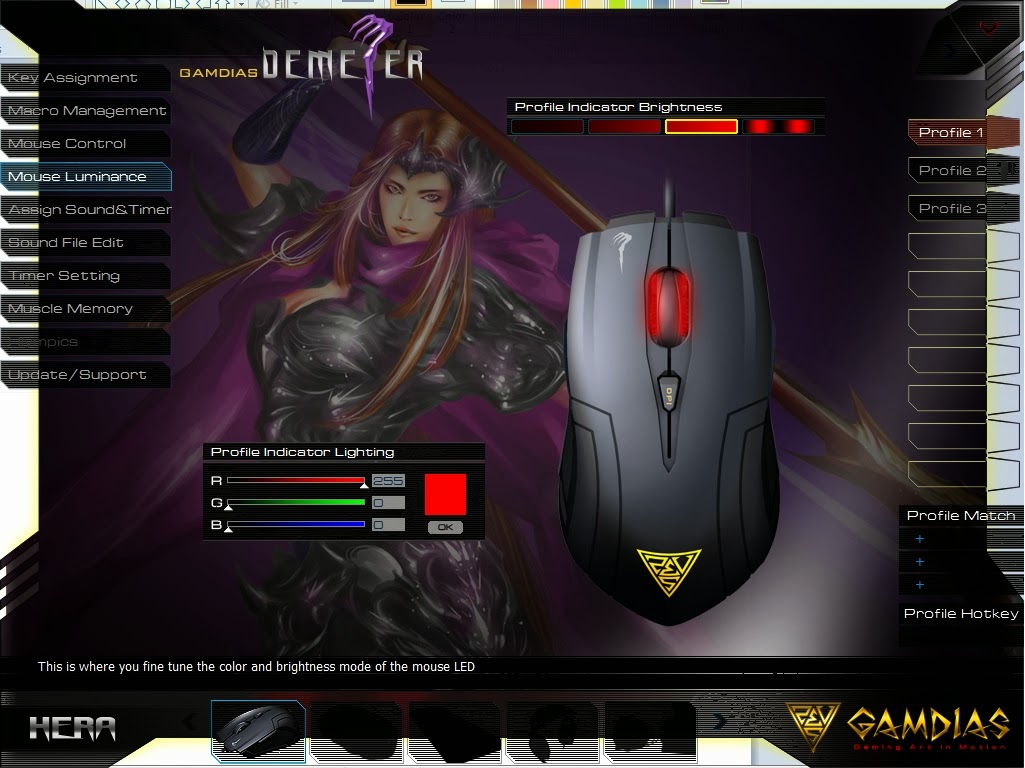 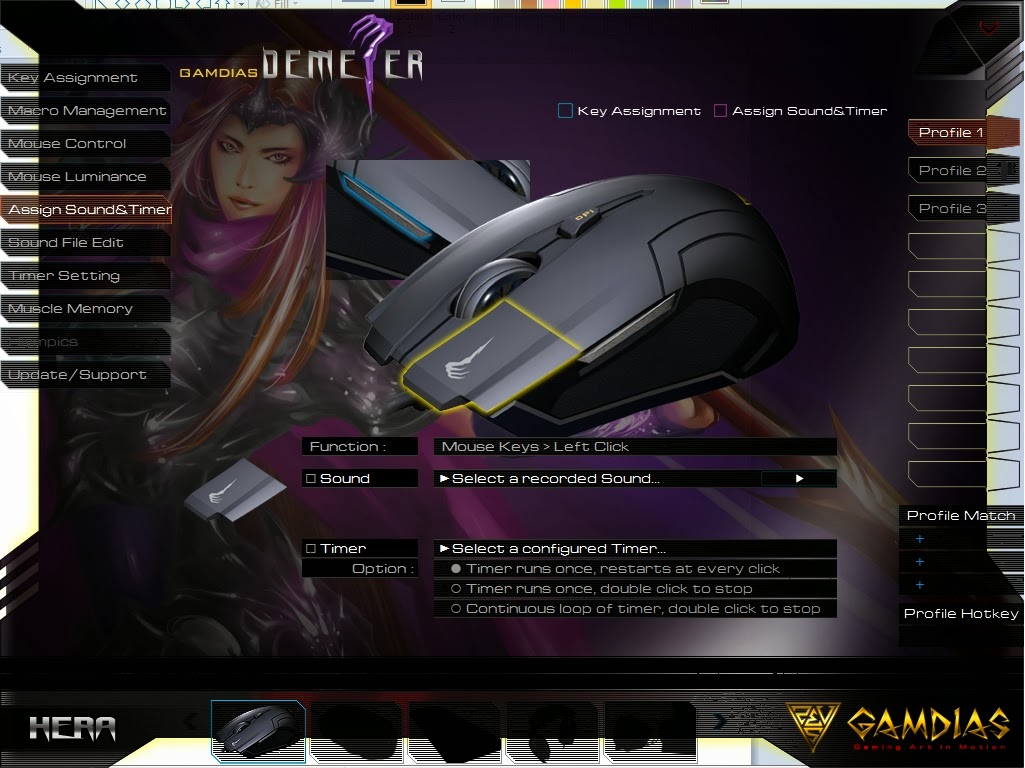 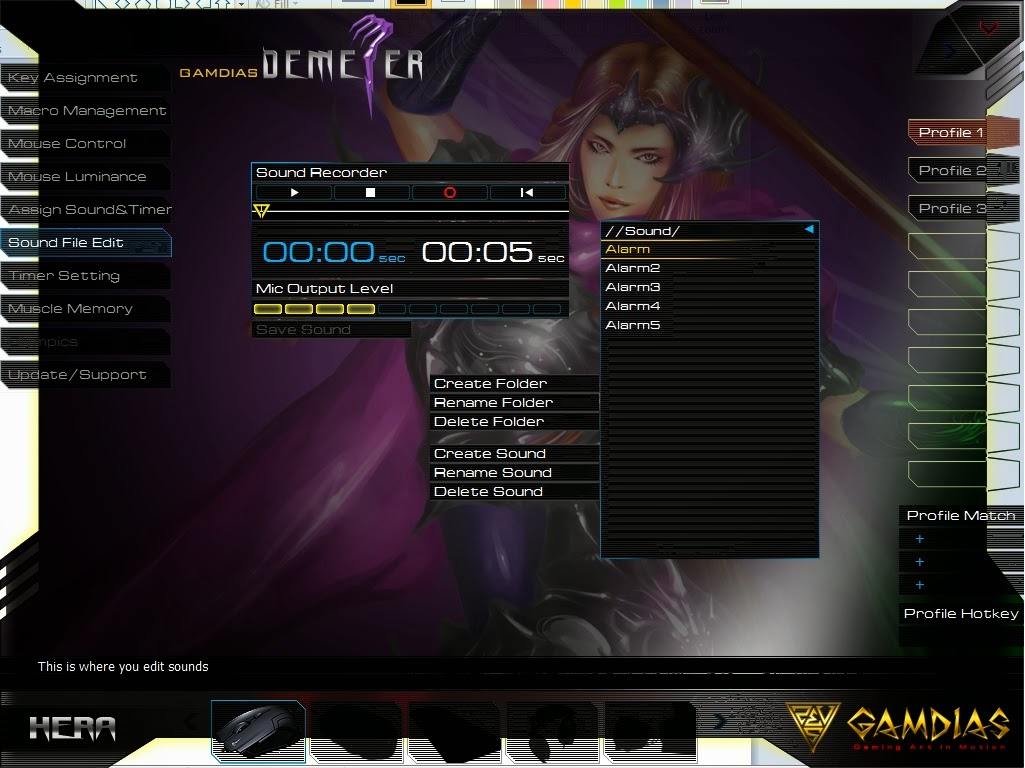 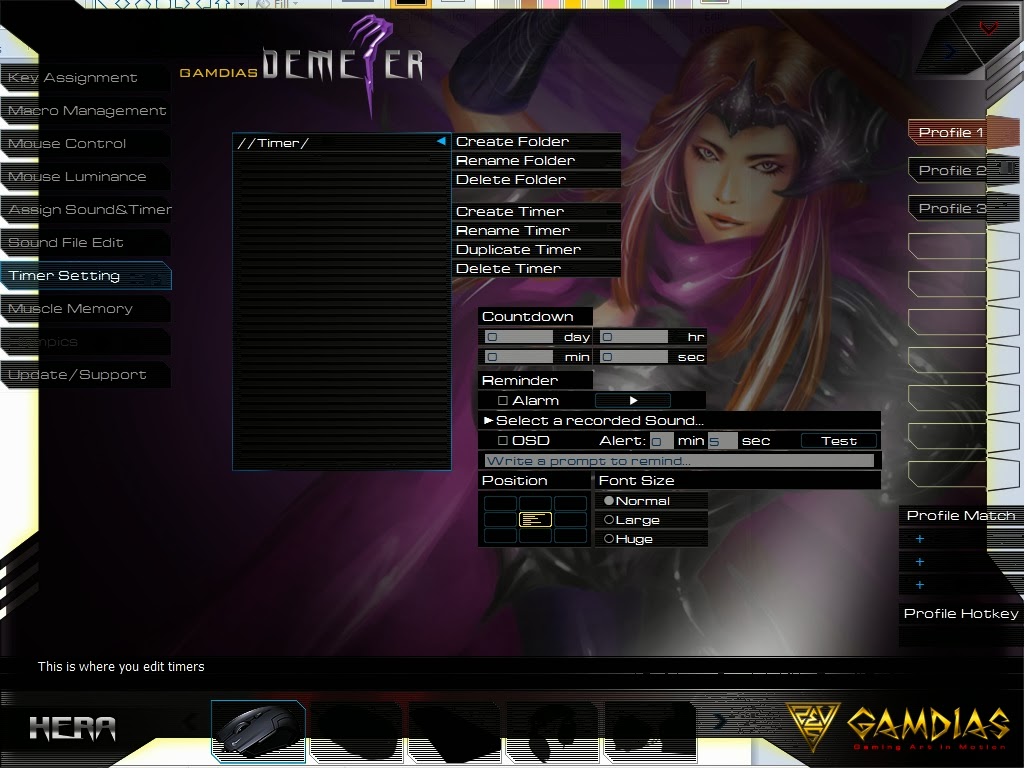 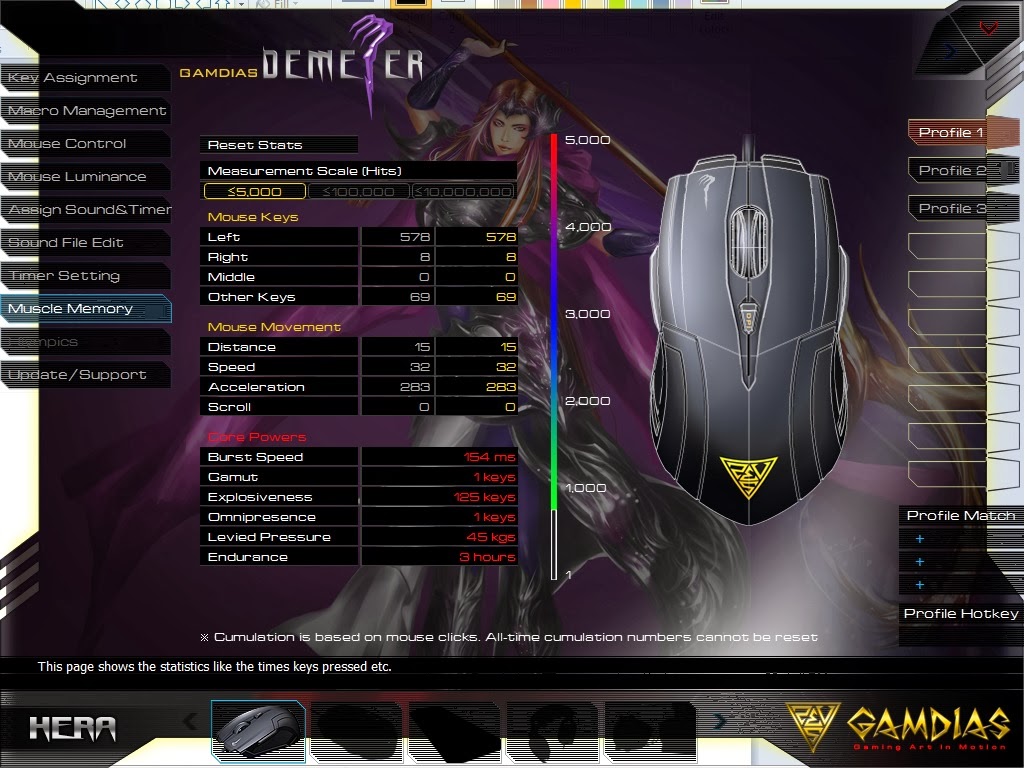 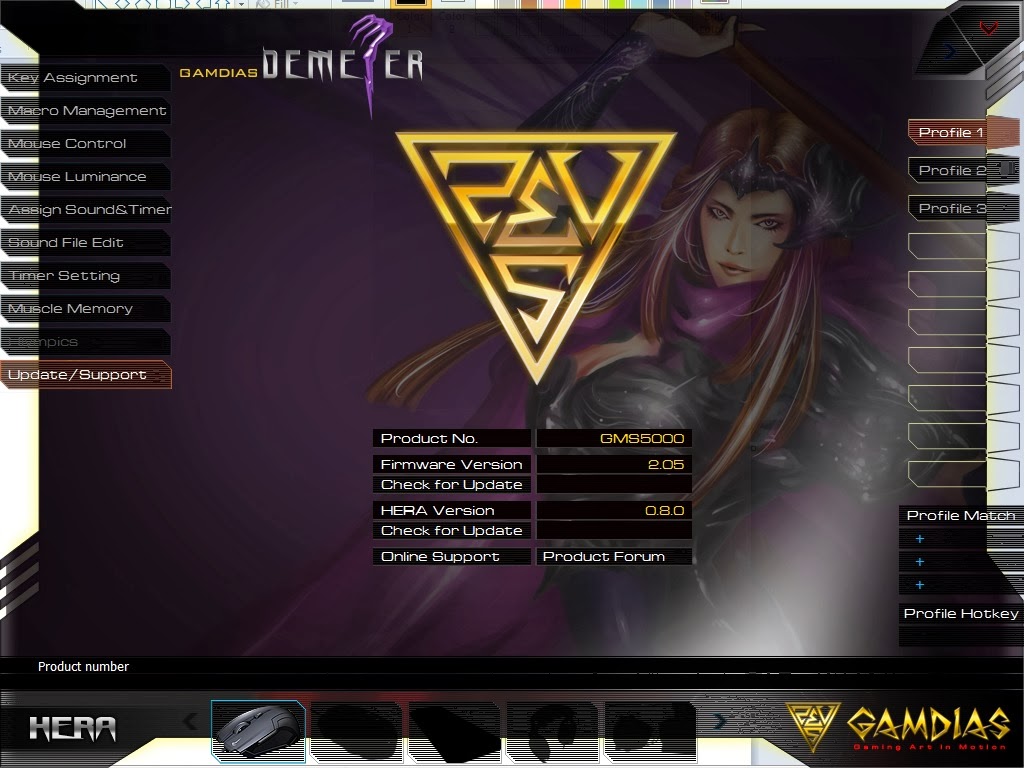 Despite being smaller than my Steelseries Ikari, the Gamdias Demeter is still sizeable and I manage to get accustomed to it after a while. I find that I could palm and claw the Demeter comfortably but have to reach a little to the top to actuate the side buttons.

Even though the Demeter is on the cheaper side, rest assured that there is nothing cheap about it’s performance. Button feedback is adequate, tracking is responsive and accurate, no issues whatsoever encountered for both general usage and gaming alike.

Overall the Gamdias Demeter Optical Gaming Mouse is a basic offering of a classic gaming mouse. Suitable for right-handed gamers and our south-paw brothers alike it is also a bit smaller than most gaming mouse which could either be a boon or bane depending on your grip preference or hand size. I’d say not many gaming mouse at this price point would be better than the Demeter in terms of features, and it would probably be perfect until Gamdias fixes the small snags on the Hera driver software.

For this, the Gamdias Demeter deserves the Tech-Critter Gold Award and Recommended Award.